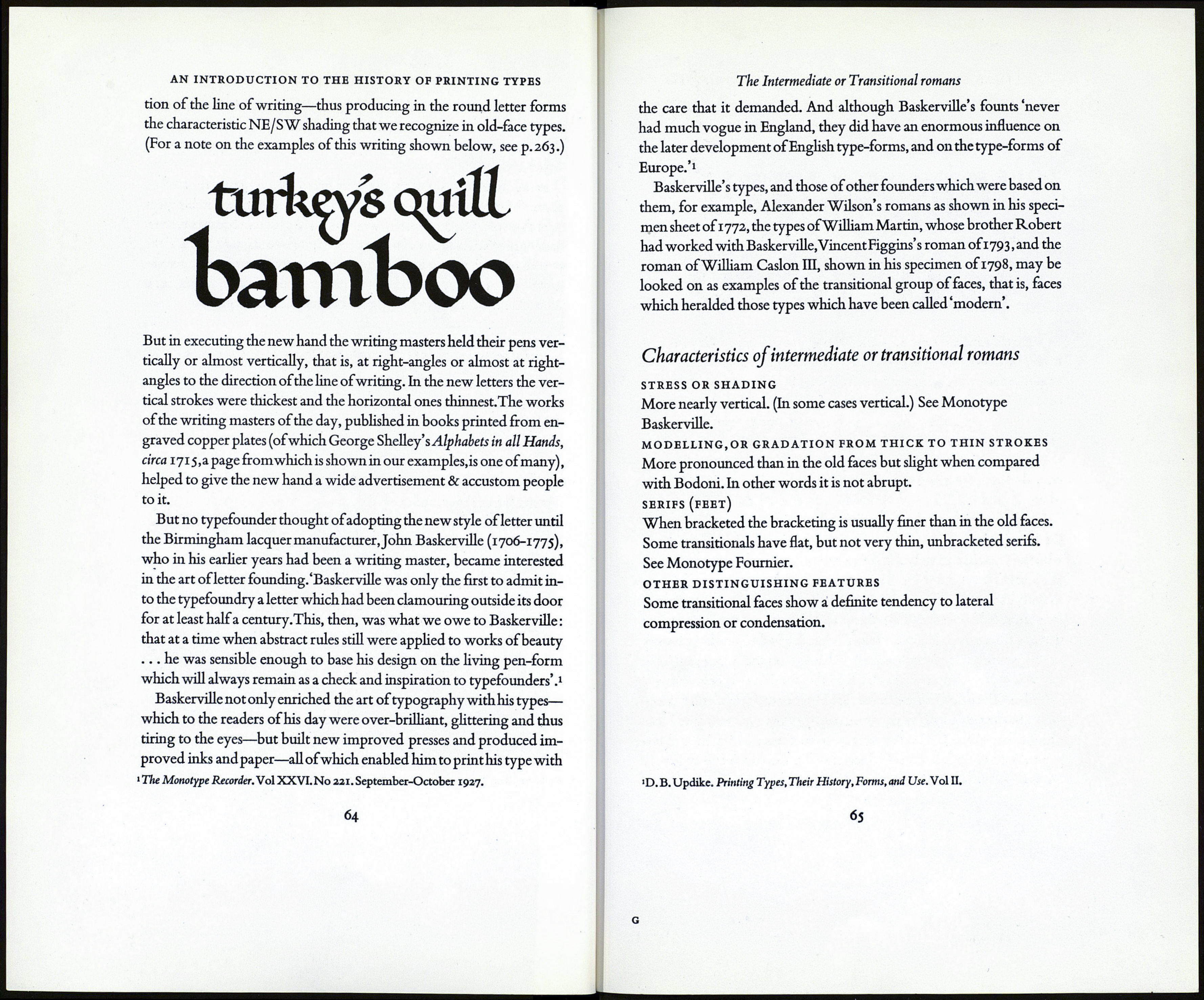 rather as a clever adapter of the work of others in that field. Naturally
inclined by upbringing to take as models the work of earlier celebrated
founders (Le Bé had been a pupil of Claude Garamond) he was never¬
theless swayed by the new fashions established by the Royal Printing
House. His first roman and italic were based on those of Louis Luce—
who complained that his ideas had been stolen. Fournier thought it
necessary to make the capitals align with the tops of the ascending letters.
And he wrote 'I squared the angles of these same capitals a little more,
as well as some of the lower-case letters, where I removed a certain
' rounding-off "in the angle between the perpendicular and horizontal
strokes.This serves to give them more freedom, to distinguish one from
another, and to make the strokes more clear.'1 Of the twenty point
size (see the example, page 68) Paul Beaujon wrote:'No more happy
compromise has been found between "old" and "modern" styles; it is
the first of the "transitional" faces, and so cleverly does it mingle tradi¬
tion with precision of cutting that it seems at times to partake of almost
contradictory virtues. It is smart but not forward, old-fashioned but not
archaic.'2

England was not immediately affected by these changes in French
typography but, in William Caslon I, had found her first real type de¬
signer. Starting his foundry nearly twenty years after the appearance of
Grandjean's new type Caslon issued his first broadside specimen sheet
in 1734. It is said that when it appeared'his reputation was made.'3

While in France the use of old-face types was gradually being dis¬
continued, in this country William Caslon I's old-face design gained
steadily in popularity. But although type design in England was not
at once affected by the changes on the Continent an influence had been
at work from towards the close of the seventeenth century which even¬
tually affected it profoundly: a new style of writing—the round hand
—was developed during that period.The old-face design of Aldus was,
as we have seen, based on the hands of the humanists—written with
broad-nibbed pens held at an angle of approximately 300 to the direc-

'In his Modèles des Caractères.

3D. B. Updike. Printing Types, Their History, Forms, and Use. Vol IL