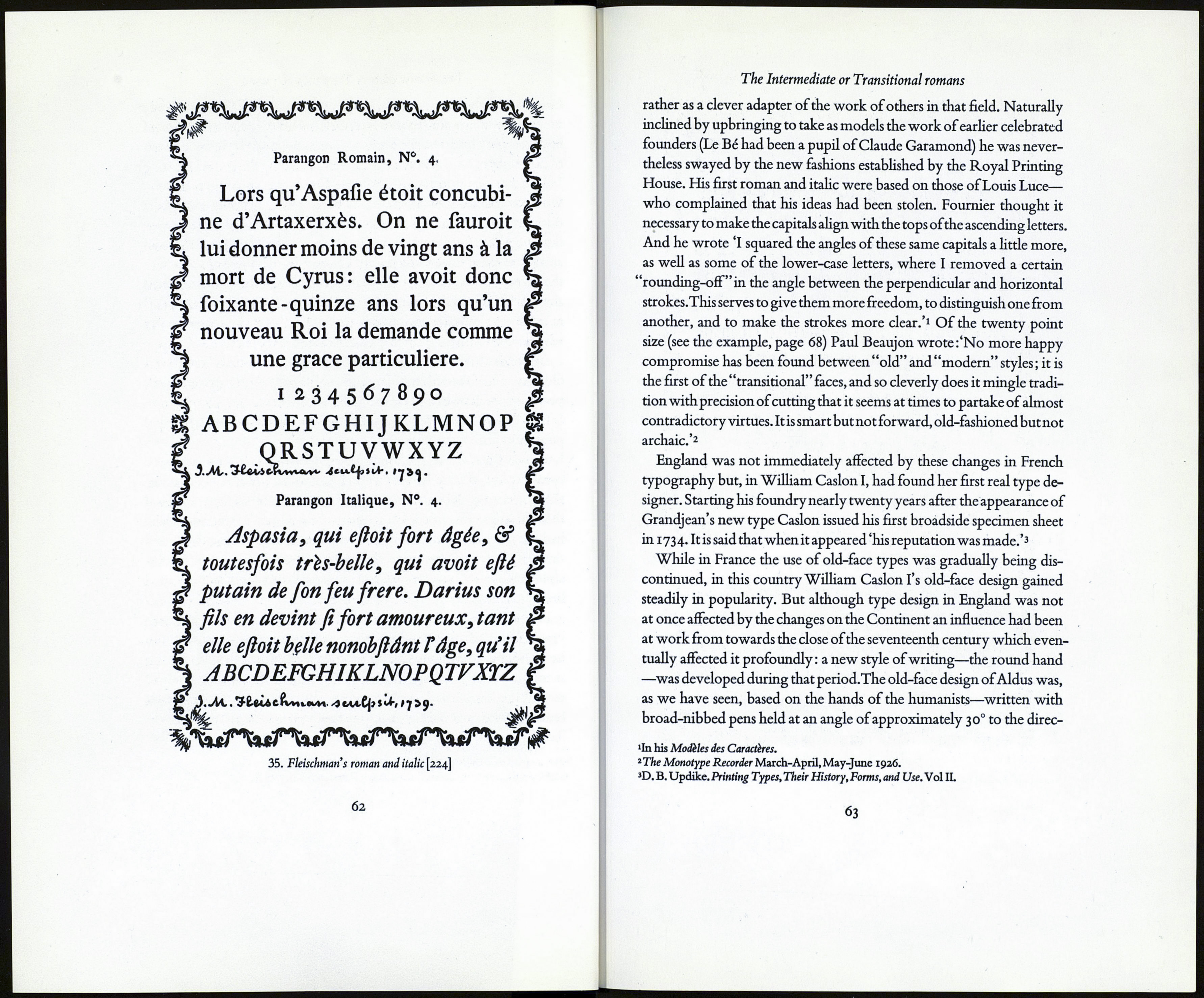 Grandjean, who cut the punches did not bind himself by the Com¬
mission's findings nor tie himself precisely to the designs accompany¬
ing the report, but wisely followed, to some extent at least, the dictates
of his own eye.

By 1702 the first sizes of the new type (romain du roi) were ready.
Our example from the book in which they were first used shows the
distinct change in the character of the design as compared with the old-
faces of Aldus and Garamond.There is a certain stiffness in the design
and sharpness in the cutting.This is because the shading is approaching
the vertical and the modelling, or difference between the thick strokes
and the thin strokes, is more pronounced.'The modern face is implicit
in this design' but the 'technique (of printing) was not yet sufficiendy
advanced to allow of the true modern face.'1

Grandjean's design was naturally copied by other typefounders, and
old face, which had been used on the Continent for the previous 200
years was, in France, superseded by the new letter.

Grandjean's 'work was continued by Jean Alexandre (his friend and
pupil) and finally completed by Louis Luce'2 (Alexandre's son-in-law).
Luce was the third of the royal typecutters and also worked on his
own account.The romans shown in his specimen of 1771 are remark¬
able for their condensation. Both Luce and Fournier le jeune 'derived
their taste for condensed romans from Fleischman,'3 a German, who
had cut 'an entirely new series of letters for the great foundry of the
Enschedés at Haarlem during the years 1730 to 1768 ... some twenty
alphabets all of which were of an elongated character, with thin hair¬
lines and thin serifs.'4

Pierre Simon Fournier (1712-1768) or Fournier le jeune, the cele¬
brated Parisian founder, whose father had been manager of the famous
Le Bé foundry, started work on his own account in 1737. Of his tre¬
mendous industry (he cut over eighty types in twenty-eight years), and
technical brilliance as a punch-cutter and founder, a wealth of evidence
remains in his published works. But although he was technically bril¬
liant he is not to be considered as an innovator of new type designs but