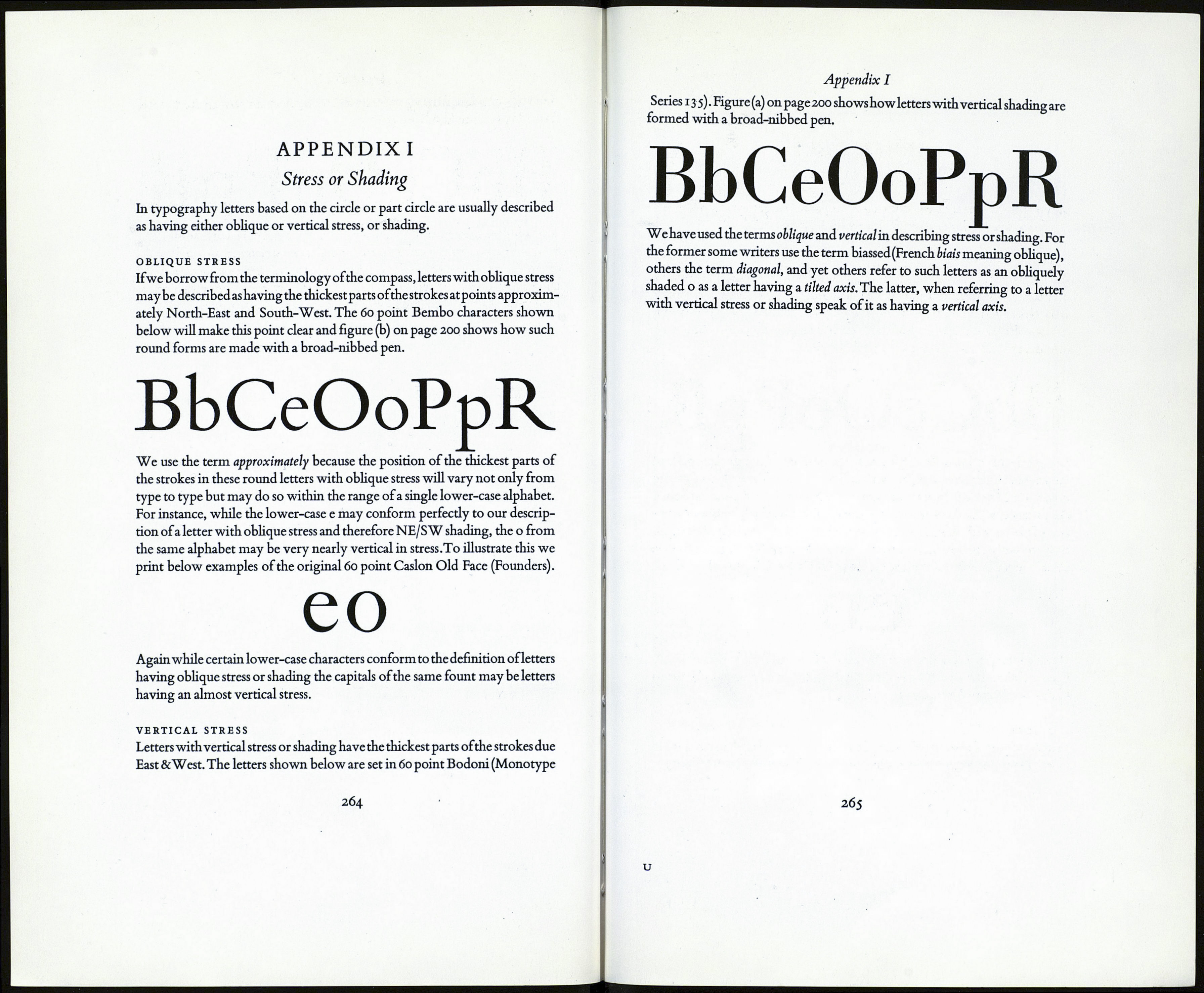 book (five leaves) the year later. By 1798 he had a Pica Greek to his credit.
A range of learned and foreign founts followed—Persian, English Telegu,
a Syriac, Hebrew in 1817 (the smallest Hebrew with points, in its day, in
England), a Small Pica Irish, a German Text and a Saxon, among others.

Figgins suffered, as did other founders of the time, by the complete revolu¬
tion of public taste in favour of modern-face types. He had founts of the new
design ready by 1815 and shows in the same specimen book examples of a
new style of jobbing face, the Antiques (i.e. Egyptians).

Reed should be consulted for an account of this founder's work and that of
his sons, Vincent Figgins II and James Figgins, to whom he relinquished his
foundry in 18 3 6, eight years before his death.They traded as V. & J. Figgins.

112. Two further designs in outline. They are from the Specimen of Printing Types
by Blake and Stephenson (successors to MrW. Caslon, of London) Letter-
Founders, Sheffield, circa i833.TheW. Caslon referred to on the title page of
this specimen was William Caslon ГѴ to whom reference is made in the des¬
criptive notes to illustration No 105, page 260. [192]

Notes on the illustrations of clarendon types

& Co, or Thorowgood and Besley. In 1845 the foundry registered a design

called Clarendon, an Egyptian with bracketed serifs attributed to Besley and

cut by a skilful punch-cutter, Benjamin Fox. Immediately the copyright

Thorowgood retired in 1849 and the foundry became known as Robert

Besley&Co. Our examples are taken from the latter's specimen book of 1854

where the pages from the 1848 W.Thorowgood & Co. specimen are repeated.

a common thing, the same formes being used for printing more than one

Notes on the illustrations of broad-nibbed pen writing

115 The only writing sheet designed, written, and completed for her pupils by
& the scribe, Mrs Irene Wellington, who was one of Edward Johnston's best
Ho- students. In a letter to the writer Mrs Wellington said 'I have not found time
ever to do that chart as I would like, nor to finish a new one which is planned'.
But despite Mrs Wellington's misgivings and her criticism of the 'unequal
& horrid tails to the y' the sheet demonstrates excellently many points about
writing with a quill or reed which students of typography, who have not as
yet had an opportunity to handle either instrument, should know.

In order to keep the sheet as nearly as possible same size (the original meas¬
ures 9 j£''or 252 millimetres over the line beginning with the small numeral 1
and ending with the skeleton lower-case m) we have printed it on three pages
despite the fact that the Footnote concerning the diagrams occupies only part of
a third page. # # ^ [198,200,201]

The examples ofcalligraphy on page 64 are from the hand of that ' unparalleled
genius as a scribe', Edward Johnston. This description of Johnston appears
in Sir Sydney Cockerell's Foreword to Priscilla Johnston's book on her father
published by Faber and Faber in 1959. The three words appear on a letter
dated 31 Jan 1913 written from Ditchling to the Reverend J. Clare Hudson
of Horncastle in reply to a request from the latter for broad-nibbed pens cut
ready for writing. Johnston sent a turkey's quill pen and a bamboo pen and
wrote that certain types of steel nibs 'are v. fair but no steel pen can compare
with a sharply cut cane or quill (tho' the steel pens will do if a person cannot
cut his own with a true and sharp nib)'.

Notes on the illustrations
of miscellaneous display types

117. The first example of a miscellaneous display face is Bifur from the Deberny
& Peignot foundry. It was designed by A. M. Cassandre. The second speci¬
men was cut by the Klingspor foundry which, alas, no longer exists: it is
Rudolf Koch's Neuland. Both are tidings. The last showing is Ludwig and
Mayer's Koloss designed by Professor J. Erbar. All are of the 1920's. [206]