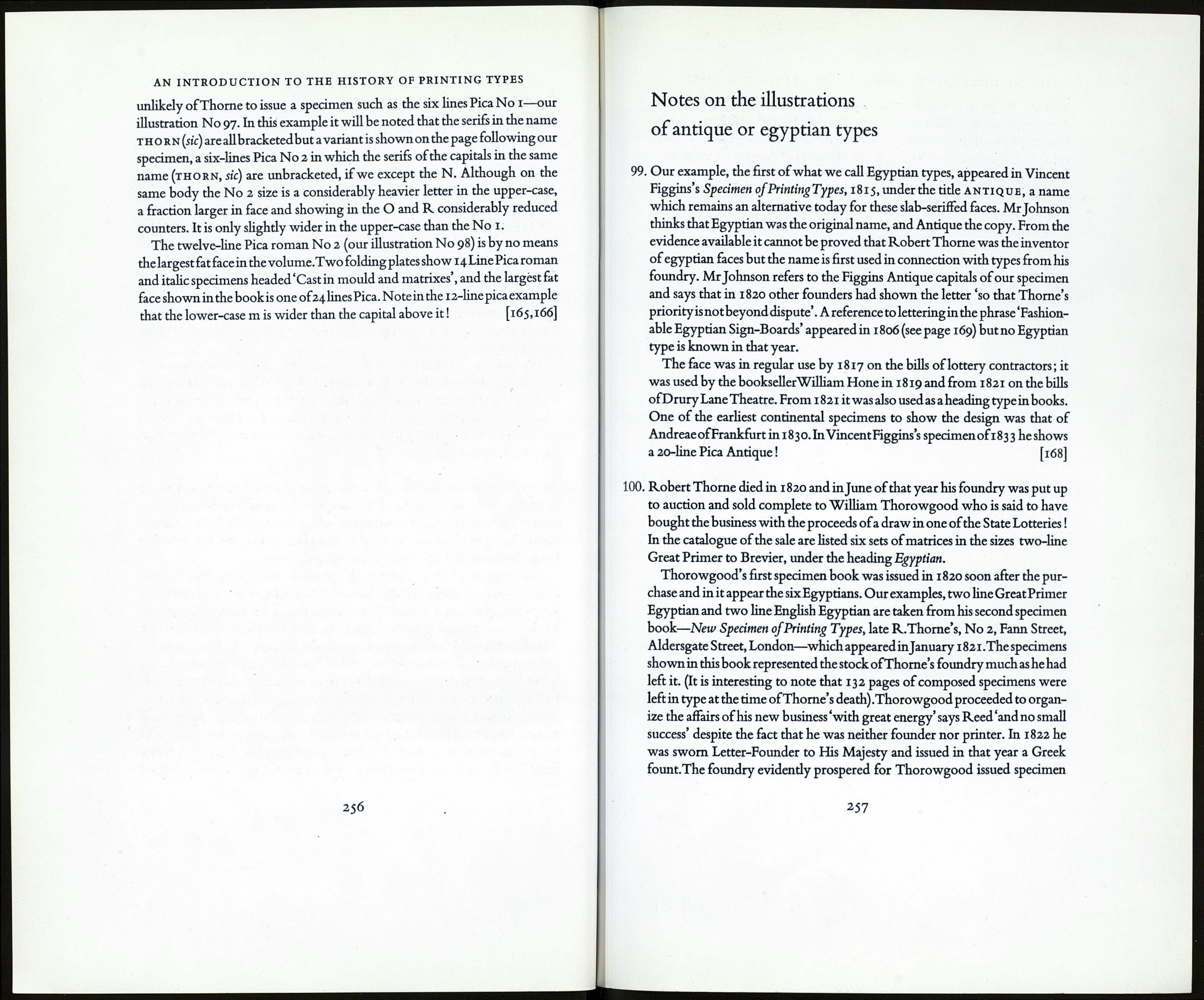 Notes on the illustrations of fat faces

94. From one of the two undated specimen books issued by Tho. CottreU, Letter
Founder. London, circa i7Ó5.These letters are referred to on page 161 where,
it wül be noted, Nicolette Gray regards them as the forerunners of the Fat
faces. But Mr Johnson writes that the lottery handbüls of the early nineteenth
century Alústrate the development of the design from the Bold faces, that is,
the thickened versions of the normal book types.

CottreU was apprenticed to the first Caslon, later working in the foundry
at ChisweU Street as a dresser. During his time withWilliam Caslon I he made
himself expert not only in his own department but in aU those appertaining
to typefounding—even the operation of punch-cutting which was practised
secredy by his master and his master's son.

In 1757, after a dispute with their employer, CottreU and Joseph Jackson,
another workman of Caslon's, were dismissed from the foundry. At first the
two worked in partnership but in i759jacksonleft the business. Reed wrote:
'CottreU's first fount was an Enghsh roman, which, though it wül compare
neither with the performance of his late master, nor with the then new faces
of BaskerviUe, was yet a production of considerable merit for a self-trained
hand'. After Jackson's departure CottreU pressed on with a series of romans,
the smaUest a Brevier. He cut the Engrossing which Rowe Mores refers to
as Base Secretary .The same writer mentions his poster letters (four-line to
twelve-line), probably cast in sand, saying that CottreU was the first to pro¬
duce such letters. His other founts include romans and italics based on those
of Caslon I; a Domesday; a Latin script and 29 varieties of printer's flowers
(SmaUPica).

For some reason CottreU's specimens—at least, those that survive—are un¬
dated. He died in 1785. Nine years later his foundry became the property of
Robert Thorne.What happened to the business from 1785 to 1794 remains
a mystery. [l6o\

95. The decorated and shaded types of the eighteenth century were intended for
use in books. Large letters were used towards the end ofthat century, and
according to Rowe Mores, Thomas CottreU was the first to produce such
types—'some uncommon founts of proscription, or posting letter of great
bulk and dimensions...' But apart from CottreU little material of this kind
was produced until the nineteenth century. From its first decade, types were

produced designed specificaUy for use on posters and hüls, that is, for the pur¬
poses of advertisement.

The first of these advertising types were the fat faces.which the writers of
the day referred to contemptuously. Hansard, for example, wrote of them as
'typographical monstrosities' and of the 'fofly of fat-faced preposterous dis¬
proportions'. Mr Johnson has said that 'In the early years of the nineteenth
century, the State lotteries were highly popular, and the bills issued by the
various contractors who organized the sale of tickets are interesting docu¬
ments for the history of jobbing types. From the year 1806 onwards, especi-
aUy on the bills of one of the chief contractors, T. Bish, fat faces are generaUy
used'. He refers also to the use of fat face types on the büls of Drury Lane
Theatre from 1807 and continues'Whatever the intentions of the original
founder, the smaUer sizes of the fat faces soon came into use for display in
books ... .The publishers of the more sensational books, such as reports of

murder trials or political trials-----found these exaggerated letters suited to

Continental founders soon foUowed England's lead and the Imprimerie
Nationale in Paris,writes Mr Johnson 'even took the—for them—unpreced¬
ented step of commissioning Thome, a foreigner, in 1818, to cut some fat
faces for their use as a new form of display type'. Our example, showing both
roman and italic fat face, is, in the original, printed in black on yeUow paper.

96. Double Pica No 2, roman and italic fat face from William Thorowgood's
New Specimen of Printing Types, late R.Thome's No 2, Fann Street, Aldersgate
Street, London 1821. Reed, writing of this specimen of Thorowgood's said
'His first specimen-book was issued a few months after the purchase (of
Thome's foundry in 1820). and a second foUowedinJanuary 1821 .which may
be taken as representing the contents of the foundry pretty much as Thome
left it ; although even in this short space of time some additions are apparent,
which formed no part of his predecessor's stock'.

97 Two pages from William Thorowgood's specimenissuedonthe ist January
& 1821 .This book contained the contents of Thome's foundry much as he had
"°- left it but the types on the pages we show are presumably some of Thorow¬
good's additions to the Thorne range. For an obvious reasonit would be most