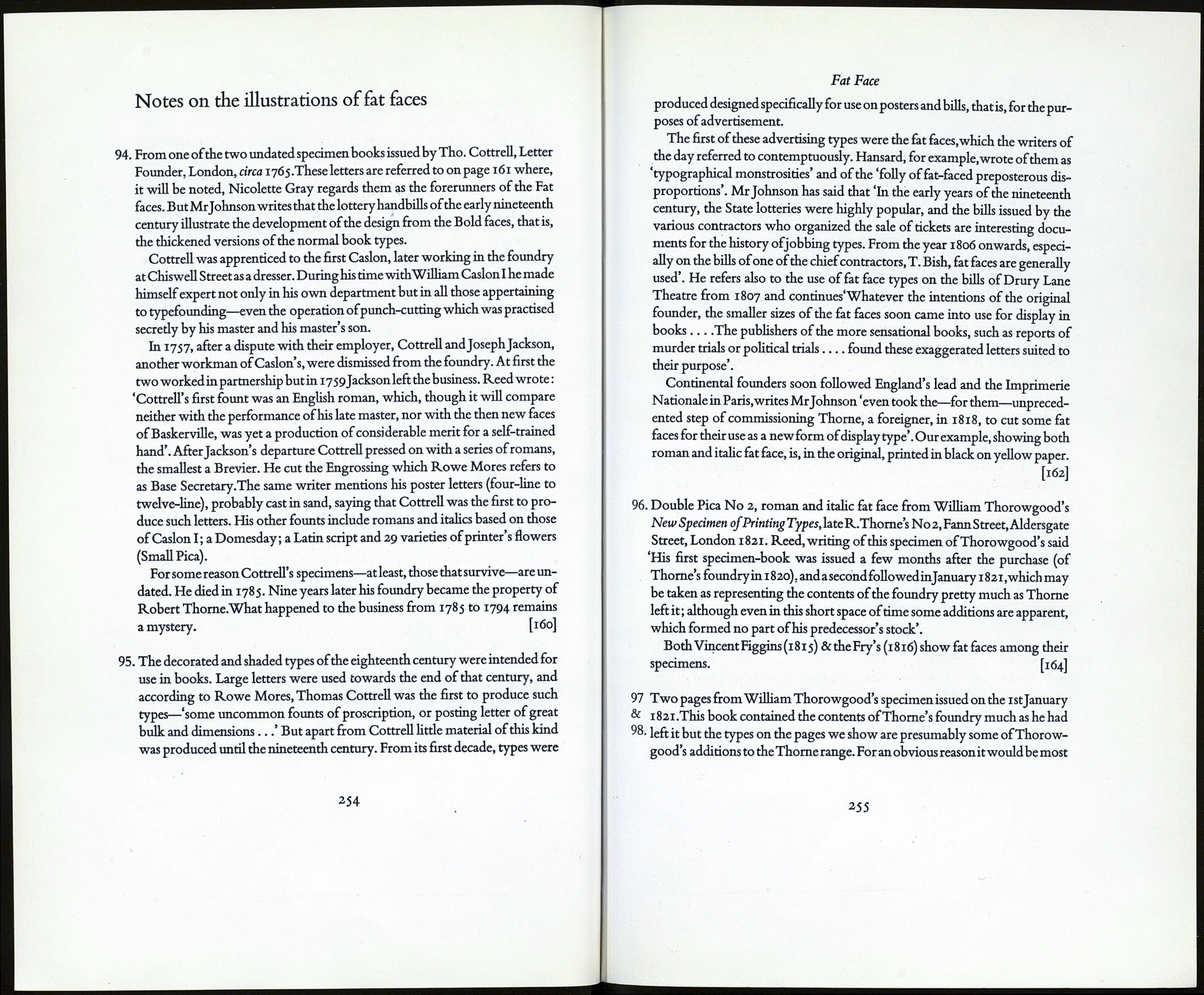 Notes on the illustrations of shaded types

90. Another page from the second volume of Founder's Manuel Typographique,
1766, showing two sizes of roman and two sizes of italic shaded capitals.
Fournier, in the first volume of the Manuel (1764) refers on pages 170,171 to
shaded letters. He wrote 'shaded letters are so caUed because the main strokes
are made in two parts, so that the stems appear as one thick and one thin line.
The hoUow between them is cut with a graver either on the punch or on the
type after it is cast'.
'The agreeable shaded letters produced by Fournier'wroteMrD.B.Updike
'may be looked at for the amusing and ingenious manner in which serifs on
the shaded italic and roman capitals in large sizes have, by a few strokes of the
graver, been made to end in a kind of "spray'.This is an exampleof a delight¬
ful effect achieved by the simplest means.They are not to be confounded with
his decorated capital letters.which are, as ornamental type-letters go, simple,
and, if sparingly used, most attractive. Both had considerable vogue at that
day and have been revived in ours.They were inspired by the lettering of
engraved tide-pages'.

We have already noted that Fournier cut nine decorated and shaded letters
(pagel 45) and that the largest of the latter were of approximately 84 point and
108 point body sizes.These he cut'expressly for posters and bdls'. [154]

91. Joseph Fry, an eminent Bristolian, bom in 1728, and William Pine, a printer,
started a foundry in that city in 1764. It was known as Fry and Pine's. Later
their manager Isaac Moore was admitted to the partnership. In 1768 the foun¬
dry was moved to London. Joseph Fry had two sons, Edmund and Henry,
whom he admitted to the foundry in 1782. Reed refers to Edmund as prob¬
ably the most learned letter-founder of his day. Luce his father he had been
educated for the medical profession, and had taken his degree but deafness
prevented himfrom pursuing that caUing.Whenitbecamenecessary to move
the foundry a second time in London and to divorce it from the printing side
of the business new premises were budt which became known as the Type
Street Foundry. Among the many activities of the Fry's and their partners
were the reproductions of the types ofWilliam Caslon I & John Baskervüle.
According to Reed, Dr Edmund Fry was one of the few founders 'who wit¬
nessed the then (circa 1800) entire abandonment of the time-honoured and
graceful characters of the first Caslon' with regret.

In his specimen of 1788 Edmund Fry shows two pages of tidings headed
Ornamented Two-line letters ranging from five-line pica to two-line brevier
which are not ornamented but are shaded letters.These pages are repeated
in the Fry and Steele specimen of 1795. In the same founders' specimen of
Metal Cast Ornaments curiously adjusted to paper, of 1794, only one decorated
capital is shown. rr ,,51

92. In 1794 Edmund Fry took Isaac Steele into partnership and in the foUowing
year issued the specimen from which our example is taken. It is typical of
many tide-pages of the period 1770-1810 not only in its arrangement but
in its use of shaded types for the important lines.

For an account of the Fry's and in particular of Dr Edmund Fry—of his
great learning ; his important phdological work Pantographia ; his rich coUec-
tion of punches and matrices of'learned' languages ; his exceUence as a cutter
of oriental punches ; his design of a raised type for the blind, among his many
other activities—the reader should refer to Talbot Baines Reed, in the new,
revised and enlarged edition.

In 1824 Fry changed the name of his business appropriately to the Polyglot
Foundry. In 1828, after 46 years' continuous labour he sold the entire contents
to William Thorowgood of Farm Street, to which foundry aU the material
was removed in 1829. rI5g"|

93. Both the Canon Italic Open and the Two-lines Enghsh Open are from the
1816 specimen book ofWilliam Caslon III. Both types are bold modem-face
letters with the addition of shading & are typical of the work of many founders
of that period. Us9]