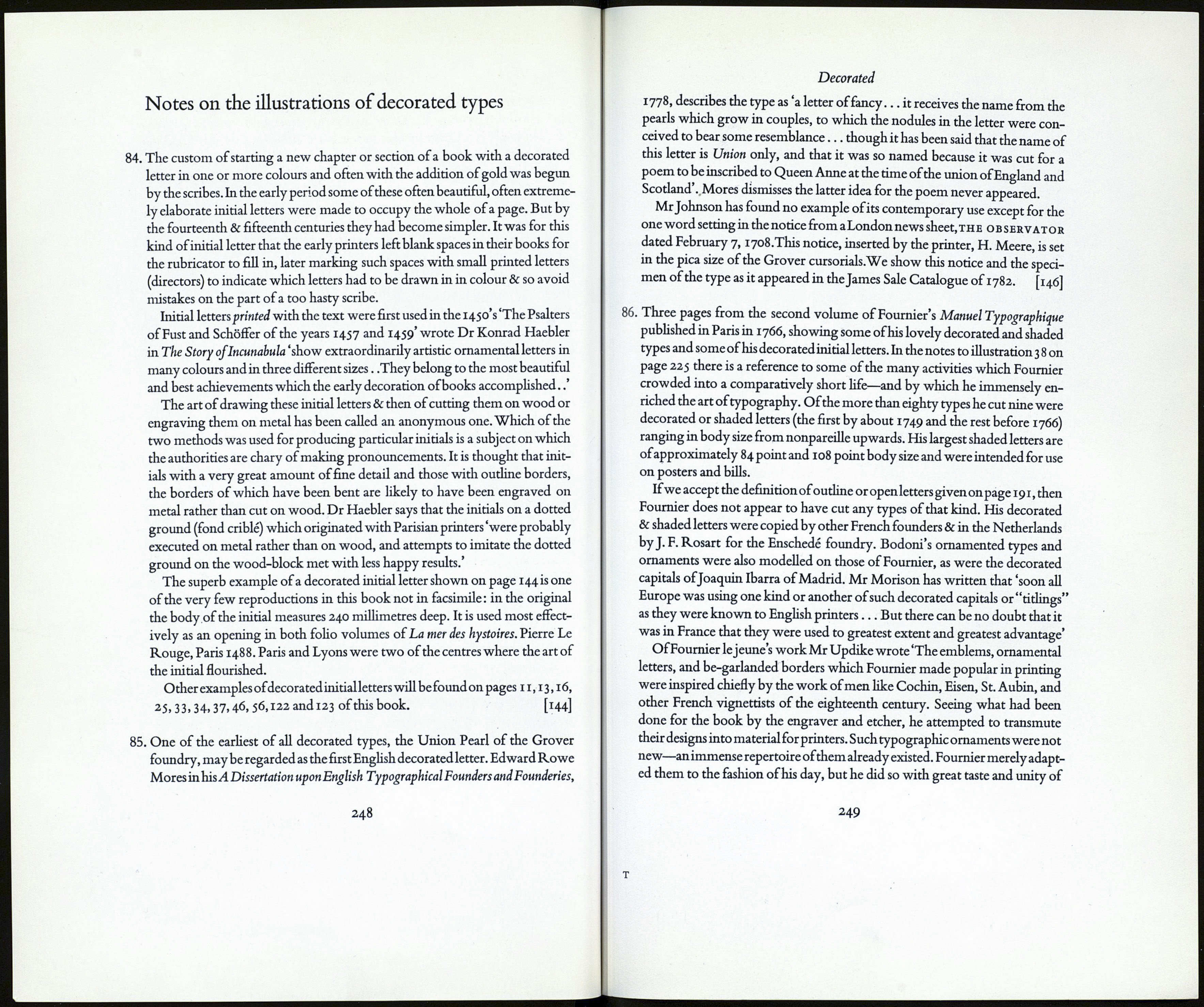 letters for the use of the blind, but his plans are said to have failed through lack
of money to develop them'.

After passing through several hands Moreau's types were sold in 1787 to
the Imprimerie Royale and made their last appearance, apart from specimen
books, on paper money in 1792.

In order to give Moreau's title-page the space it needs it is shown out of
order, i.e. following, instead of preceding, the page headed Epistre.

80. Though some of Pierre Moreau's books are fairly weU known, seventeenth
century Latin scripts in England are a rarity.'It must be admitted',writes Mr
Morison in his article on script types in The Fleuron 'that though Enghsh script
types were decidedly inferior in design to those made abroad, they were
nevertheless early in use. Here I may not delay to discuss the use of Enghsh
secretary hands which are to be found very early in type.The first script other
than these that I have been able to discover in use in England ... is... of the
same general character as Moreau's, & there can scarcely have been in England
at that time a craftsman capable of cutting so fine a character. As far as my
information goes it was first used in the certificates granted to Nonconformist
preachers under the First Declaration of Indulgence by Charles II in 1672'
Mr Morison says that he does not know the name of the printer of these
hcences but thinks that they may have been handled by Moses Pitt, a notable
London bookseUer of the day. [13 8]

81. Part of a page of an Ichabod Dawks's News-Letter, January 3,1698, printed
in the Enghsh No 2 size of the Grover cursorials.This type was not changed
throughout the Ufe of the newsletter (which was pubhshed every other day,
Sunday excepted), the first issue appearing about June 1696. None are known
after December 1716. Rowe Mores described these cursorials as flimsy types
imitating a pseudo Italian handwriting. They are in fact says Mr Johnson,
based on an inferior Italian hand, showing some gothic survivals. He thinks
it probable that 'these first cursorials were cut at the instigation of Dawks
and for the purpose of reproducing more or less in facsimüe the manuscript
newsletter which was handed about in the coffee-houses'—and records the
use of these cursorials by other printers. See ülustration 85, page 146.

The Grover foundry possessed six sizes of these cursorials. In that confusing
compdation, the sale catalogue of the (John) James foundry ofjune 1782 five
of them are shown : Double Pica, Enghsh, Enghsh No 2, Pica, and SmaU Pica
under the heading scriptorial. The design varies, often considerably, with
the changes in body size. [139]

82.'When we reach the generation of Fournier and Luce, Fleischman and Rosart,
the Latin scripts of the continental countries appear in great numbers'writes
Mr Johnson.'Even German type-cutters were influenced by this flood of

scripts and Latin scripts began to appear in Teutonic specimens___and (in

Italy)... that prolific type designer G.B. Bodoni... naturaUy copied the
French & produced a score of scripts, of no great merit and with bewildering
tides'.

But in England no Latin scripts were designed for over seventy years after
the cutting of the Grover cursorials (neither William Caslon I, his son, nor
John Baskervüle produced a Latin script). It was not until about 1774 that
Thomas CottreU, a pupü of William Caslon I, who had started his own foun¬
dry in 1757 introduced a new fashion in script types. Mr Johnson says that
CottreU 'was influenced partly by the French, but introduced an innovation
which was in turn copied by the continental founders. He attempted to pro¬
duce the iUusion of actual script by fitting his letters with exactness (our ex¬
ample is of his Double Pica Script).This excess of ingenuity was particularly
associated with the Enghsh founders, and the type was called Anglaise by its
imitators in France, the Didots and others'. [141]

83. Enghsh founders foUowed CottreU and designed close fitting scripts in his
style.These were stül in part based on the true Italian hand, but eventuaUy
scripts of this kind were influenced by the 'modem' cult in type design. They
began to show greater differentiations in modelling, or in the gradation from
thick to thin, and, Mr Johnson observes/increased ingenuity in imitating a
current round hand.Then we get the typical Anglaise, admired and copied
by the Didots, the script of the nineteenth century'. Our example of Firmin
Didot's Anglaise is from Caractères d'écriture, Gravés, Imprimés par Firmin
Didot, Paris 1809. • 1^42]