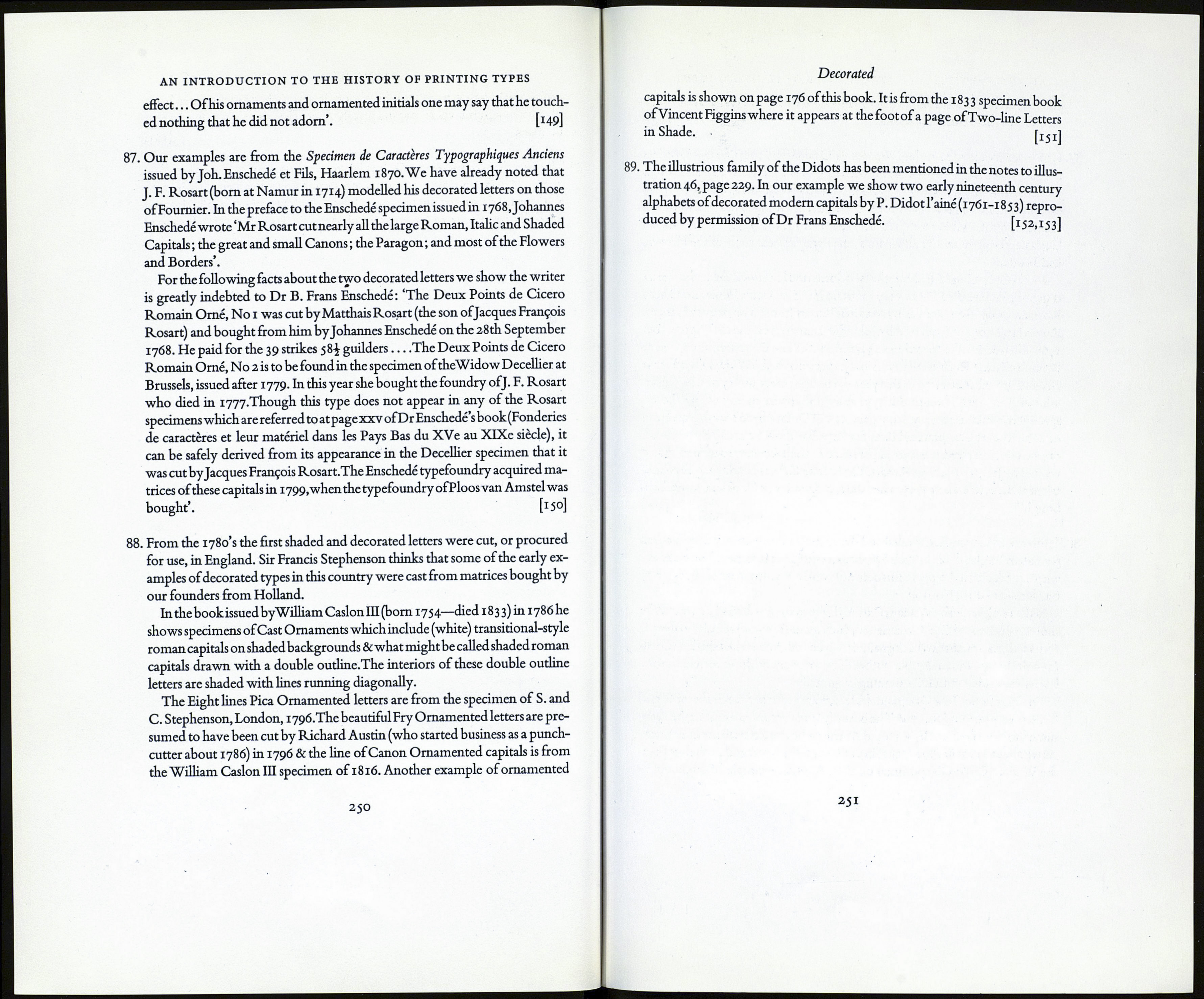 Notes on the illustrations of decorated types

84. The custom of starting a new chapter or section of a book with a decorated
letter in one or more colours and often with the addition of gold was begun
by the scribes. In the early period some of these often beautiful, often extreme¬
ly elaborate initial letters were made to occupy the whole of a page. But by
the fourteenth & fifteenth centuries they had become simpler. It was for this
kind of initial letter that the early printers left blank spaces in their books for
the rubricator to fui in, later marking such spaces with smafl printed letters
(directors) to indicate which letters had to be drawn in in colour & so avoid
mistakes on the part of a too hasty scribe.

Initial letters printed with the text were first used in the 1450's 'The Psalters
of Fust and Schöffer of the years 1457 and 1459' wrote Dr Konrad Haebler
in The Story of Incunabula 'show extraordinarily artistic ornamental letters in
many colours and in three different sizes. .They belong to the most beautiful
and best achievements which the early decoration of books accomphshed..'

The art of drawing these initial letters & then of cutting them on wood or
engraving them on metal has been caUed an anonymous one. Which of the
two methods was used for producing particular initials is a subject on which
the authorities are chary of making pronouncements. It is thought that init¬
ials with a very great amount of fine detail and those with outline borders,
the borders of which have been bent are likely to have been engraved on
metal rather than cut on wood. Dr Haebler says that the initials on a dotted
ground (fond criblé) which originated with Parisian printers 'were probably
executed on metal rather than on wood, and attempts to imitate the dotted
ground on the wood-block met with less happy results.'

The superb example of a decorated initial letter shown on page 144 is one
of the very few reproductions in this book not in facsimüe: in the original
the body of the initial measures 240 mülimetres deep. It is used most effect¬
ively as an opening in both folio volumes of La mer des hystoires. Pierre Le
Rouge, Paris 1488. Paris and Lyons were two of the centres where the art of
the initial flourished.

85. One of the earliest of aU decorated types, the Union Pearl of the Grover
foundry, may be regarded as the first Enghsh decorated letter. Edward Rowe
Mores in his Л Dissertation upon English Typographical Founders and Founderies,

1778, describes the type as 'a letter of fancy... it receives the name from the
pearls which grow in couples, to which the nodules in the letter were con¬
ceived to bear some resemblance... though it has been said that the name of
this letter is Union only, and that it was so named because it was cut for a
poem to be inscribed to Queen Anne at the time of the union of England and
Scotland'. Mores dismisses the latter idea for the poem never appeared.

Mr Johnson has found no example of its contemporary use except for the
one word setting in the notice from aLondon news sheet.THE observator
dated February 7,1708.TIÜS notice, inserted by the printer, H. Meere, is set
in the pica size of the Grover cursorials.We show this notice and the speci¬
men of the type as it appeared in the James Sale Catalogue of 1782. [146]

86. Three pages from the second volume of Fournier's Manuel Typographique
pubhshed in Paris in 1766, showing some of his lovely decorated and shaded
types and some of his decorated initial letters. In the notes to iUustration 3 8 on
page 225 there is a reference to some of the many activities which Founder
crowded into a comparatively short hfe—and by which he immensely en¬
riched the art of typography. Of the more than eighty types he cut nine were
decorated or shaded letters (the first by about 1749 and the rest before 1766)
ranging in body size from nonpareüle upwards. His largest shaded letters are
of approximately 84 point and 108 point body size and were intended for use
on posters and büls.

If we accept the definition of outline or open letters given on page 191, then
Fournier does not appear to have cut any types ofthat kind. His decorated
& shaded letters were copied by other French founders & in the Netherlands
by J. F. Rosari for the Enschedé foundry. Bodoni's ornamented types and
ornaments were also modeUed on those of Fournier, as were the decorated
capitals of Joaquin Ibarra of Madrid. Mr Morison has written that 'soon aU
Europe was using one kind or another of such decorated capitals or "tidings"
as they were known to Enghsh printers... But there can be no doubt that it
was in France that they were used to greatest extent and greatest advantage'
Of Fournier le jeune's work Mr Updike wrote 'The emblems, ornamental
letters, and be-garlanded borders which Founder made popular in printing
were inspired chiefly by the work of men like Cochin, Eisen, St. Aubin, and
other French vignettists of the eighteenth century. Seeing what had been
done for the book by the engraver and etcher, he attempted to transmute
their designs into material for printers. Such typographic ornaments were not
new—animmense repertoire of them already existed. Fournier merely adapt¬
ed them to the fashion of his day, but he did so with great taste and unity of