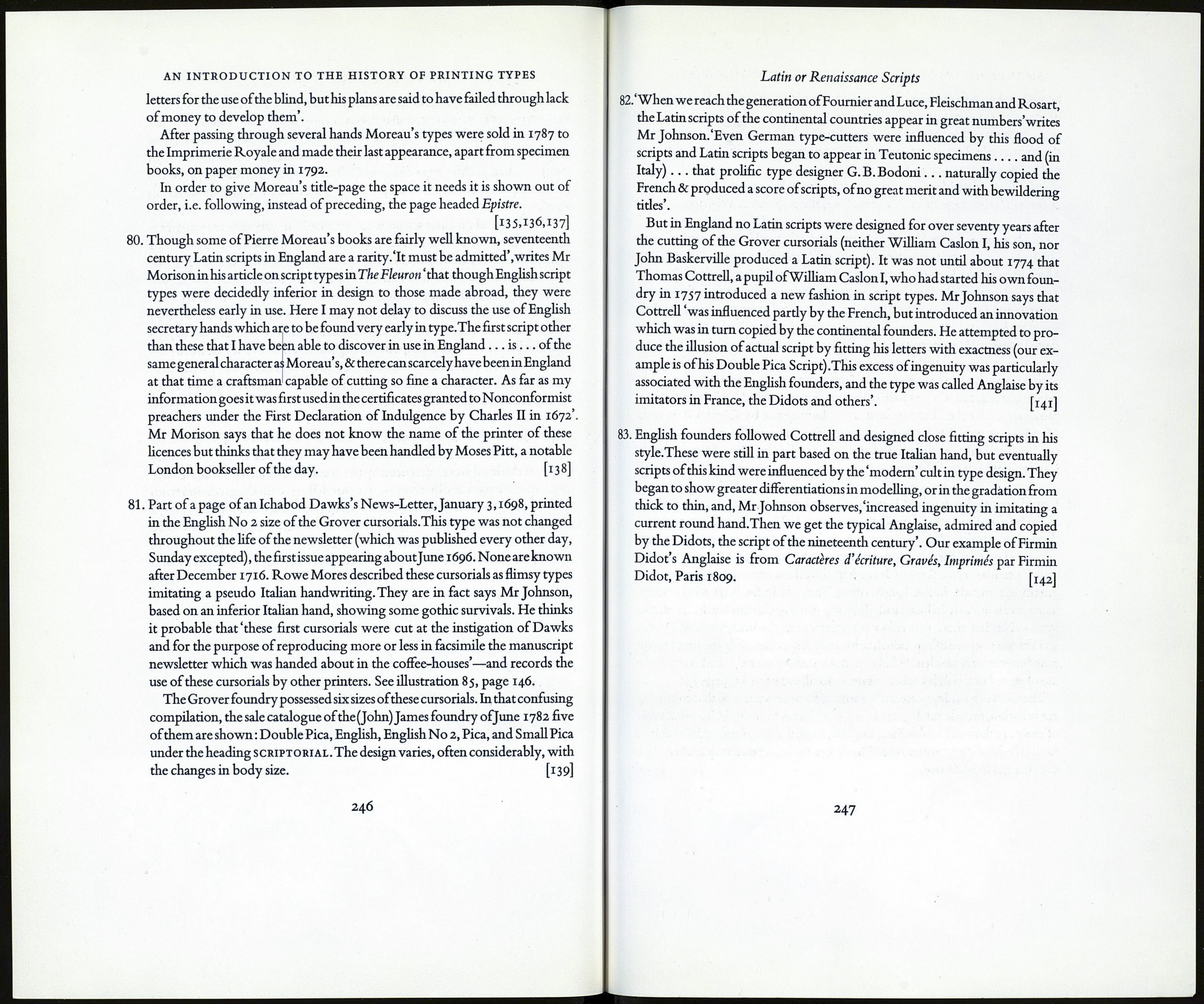 i782,whence they had come from the Grover Foundry (established about
1674 by James and Thomas Grover). [124]

73. From A Specimen of Printing Types by Tho. CottreU, Letter Founder, London,
undated.This fine specimen of engrossing.which Mr Johnson has caUed our
last Enghsh gothic script was cut circa 1765 for William Richardson, a law
printer who issued a specimen of the 'New Printing Type in Imitation of the
Law Hand'. Luce the German Kanzleischrift (see ülustration 66 page 118) and
the contemporary French ronde, CottreU's legal script is partiaUy romanized,
many of the capitals, and the lower-case h and r having the roman forms.

Students wül note the extraordinary examples of word division in this
CottreU page. [125]

of Latin or Renaissance scripts

74 Our examples are facing pages (printed from wood blocks) from the beautiful
& writing manual of the Venetian master, Vespasiano Amphiareo (born at

75. Ferrara in 1501), a teacher of calligraphy for thirty years. Printed by Gabriel
GioUto&pubUshed in Venice in the year 1554, this work, the only one which
Amphiareo appears to have completed, went into many editions. He claimed
the invention of the CanceUeresca bastarda hand: from it the second group
of scripts—the latin or renaissance—are derived. A comparison with fllustra-
tions 26, 27 and 28 show that the hand is a less formal and rounder style of
writing than that of Arrighi. [126,128]

76. Lines from a four page specimen Caractères d'écriture Gravés Imprimés par
Firmin Didot, Paris 1809 .This script is ' a descendant of civüité which is lar gely
gothic... (and) is frequendy found as a decorative type in French books of
the first half of the nineteenth century'. [130]

77. From Founder le jeune's Modèles des Caractères, Paris 1742. This script was
also caUed financière because it was employed in the (French) Ministry of
Finance. See text, page 127. We show theLettres Ornees specimen because it is
not included in all copies of the Modèles. It is in the form of a slip measuring
ЗІ" X 4-i" pasted to the edge of the Caractère de Finance specimen, which isitself
printed on a short page, i.e. a page measuring only j\" in width. [132,133]

78 From La Belle Esclave by Claude de l'Estoüle printed by Pierre Moreau, Paris
& 1643. Moreau, a Parisian writing-master, began printing books from engrav-
79. ed plates but later turned his attention to typefounding. He cut the bâtarde
ordinaire or itahenne scripts shown in our examples (based on the style of
contemporary handwriting) designing them for use in bookwork. Fournier
says that Moreau dedicated the first proofs of his new types to Louis XIII in
1642, who gave him the post of Printer in Ordinary to the King by way of
encouragement. In the six years from 1643 Moreau printed about a dozen
books set in three sizes ofhis bâtarde itahenne. On page 101 oiLaBelleEsclave
appears another script used as a heading to an extract from the Royal Privdege
which Mr Johnson describes as 'an upright script descended from civüité,
based on the hand known as Ronde'. Besides designing script types Mr D.B.
Updike records that Moreau 'has the distinction of having designed raised