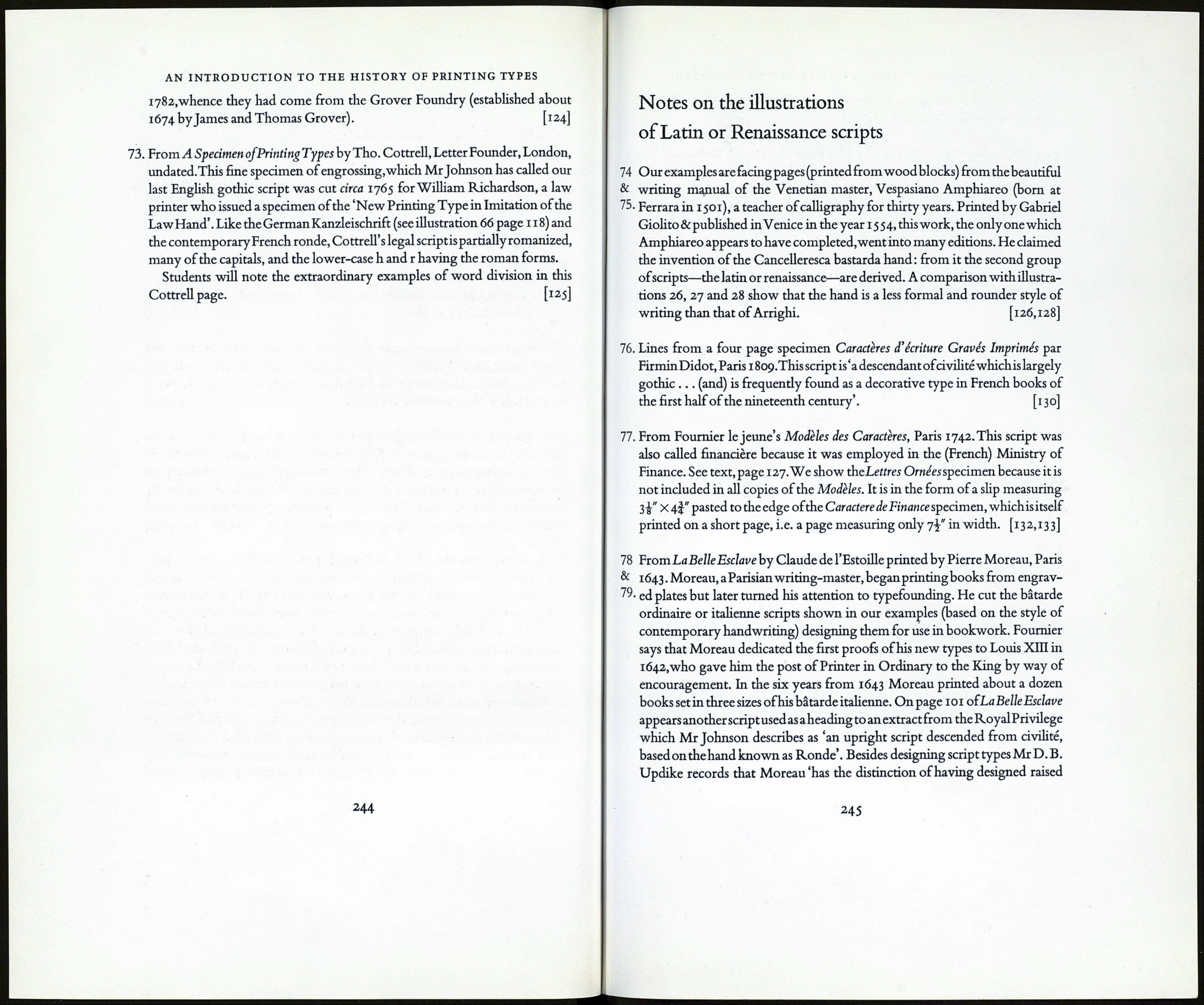 68. The latest script shown by the Enschedés, writes Mr Johnson,'the "Klein
Kanon", of unknown origin, has lost aU colour ; it corresponds among gothic
scripts to Didot's " Anglaise"among the Latin. It is like the Anglaise not only
in colour, but also in the attempt to conceal the fact that it is type by the close
fitting of the connecting strokes. Again, like Anglaise among the Latin scripts,
it remained the standard script throughout the nineteenth century'. Our speci¬
men is reproduced by permission of Dr Frans Enschedé. [120]

69. From P. Galtheri Alexandreidos libri decern printed by Robert Granj on at Lyons
in 15 5 8, in a gothic script he had designed which was popularly caUed civüité,
a name derived from the titles of two books on good manners printed in the
new typein the years 1559 and 1560 respectively. Granjon caUed his new type
'lettres françaises' and based it on the contemporary current script. He printed

about twenty books in it between the years 1557&1562. Not gready popular
in France the type was nevertheless used in that country occasionaUy at all
periods : examples are shown in specimen books of the eighteenth century &
a book was printed in the middle of the nineteenth century in civilité. Besides
books treating of manners the script was used for books on the art of writing.
It was thought, remarks Mr Johnson 'to be an advantage that chddren should
learn to read from a book printed in a type resembling the ordinary current
script'.

Granj on's type was copied despite the fact that he had been granted a
monopoly for ten years in 1557 by Henri II. Granjon himself supplied other
printers—notably Christopher Plantin at Antwerp, who had three civilité's
cut by Granjon as well as others by Flemish typefounders (the French design
is better than the rather restless Flemish). There are longish passages set in
civüité in the preface toPlantin's famous Polyglot Bible (1569-1573). And
there are instances on record of one of Granjon's civüité's actuaUy being used
in this country in the 1570's. [121]

70. The earliest English writing book, that of John Baüdon, published in 1571,
shows a script based on the Elizabethan current hand which he caUs the secret¬
ary hand (a gothic script employed as the normal handwriting of commercial
circles of the time). 'It was', says MrJohnson.'a hand used throughout Europe,
with national peculiarities, in Italy as weU as in the countries north of the Alps.
In Italy it was called "lettera francese"or "lettera mercantesca"... In France
and the Netherlands it was known as civüité... A genuine English script was
apparendy not cut until towards the end of the century'.

This type (one of at least three) was first used in the colophon of a book print¬
ed in 1576 (but it was not used for the text of books as were the civüité types
on the Continent). After that it appears in various forms of ephemera : official
& semi-official notices, circulars, marriage & wine licences, the recognizances
entered into by victuaUers, and on circular letters demanding loans—as in the
second year of the reign of James I (1604).

Our example shows part of an interesting proclamation of the thirty-fifth
year of Elizabeth's reign (1593) printed in Secretary No 1. [122]

Secretary No 2, larger in face and more upright is 'not known from any type
specimen, either English or foreign' writes Mr Johnson. It is found on circular
letters issued in the third year of the reign of James I (1605) and was used on
other ephemera (licences and notices). Some school books of the day show a
specimen of the hand, e.g. Edmund Coote's The English Schoolmaster—in the
later editions of 1636,1662 and 1673.

71. Script types have often been used with music. Our example is from John
Barnard's The First Book of Selected Church Musick (CoUected out of divers
approved authors) printed by Edward Griffin in 1641. Barnard was a canon
of St. Paul's Cathedral. Mr Johnson, writing of this work said 'There is still a
third fount of secretary, of a stül larger size and of more handsome design.
This was used for the words in a music book of 1641.. .The type appears in
no other book from the same press of those preserved in the British Museum,
nor have I found it anywhere else. Barnard's book is a handsome (folio) pro¬
duction decorated with some fine calligraphic initials and taüpieces' .Very few,
if any, complete sets (six parts) of Barnard's work are extant because of de¬
struction or mutilation by CromweU's men. [123]

72. In England, in addition to the secretary hands there was another gothic script
of considerable antiquity, a legal, upright script caUed court hand, the design
of which says Mr Johnson 'remained uniform for several centuries, and in the
writing books of the caüigraphers of the seventeenth century there are a num¬
ber of fine specimens of the script. .which appears to be confined to England'.
Though it was used in legal documents as a written hand or printed from en¬
graved plates it does not appear to have been often used in type form.When
the use of the court hand for legal documents was abolished in 173 3 its place
was taken by a script known as engrossing. Our specimen shows two sizes of
court hand in type form from the Sale Catalogue of the James Foundry, June