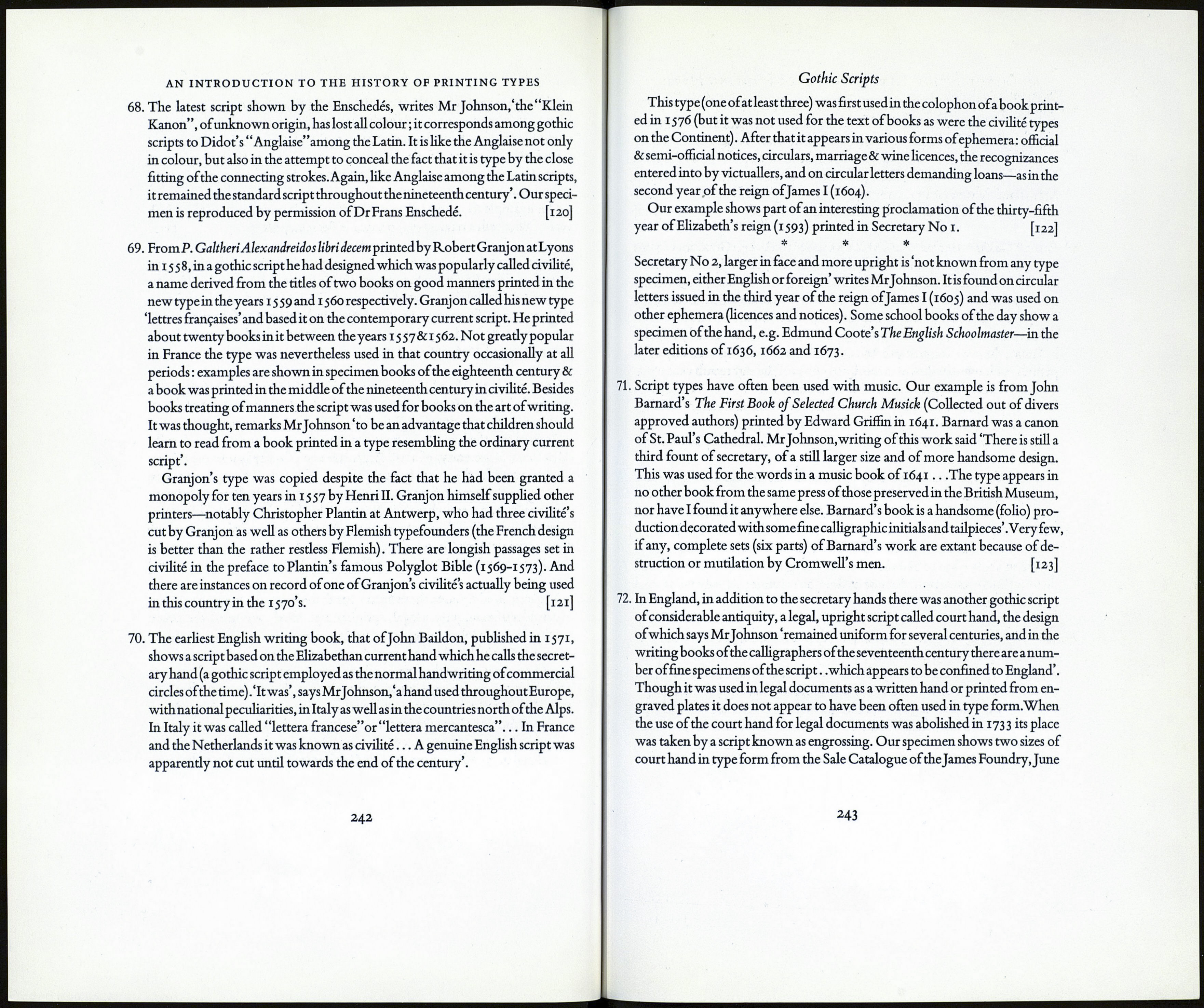 Notes on the illustrations of gothic scripts

63. Among examples of various hands in the second part of Arrighi's beautiful
writing manual, Il modo de temperare le Penne (Vertice 1523) is one entided
'Lettera da Bolle'.This form of gothic script was used for the writing of papal

Bulls (edicts or mandates) in the sixteenth century. Mr Johnson describes it
'as an upright, round, gothic hand, which in the lower-case has some resemb¬
lance to Schwabacher (see page 11), or to the later French hand called Ronde
(seepage 130).The form was established by tradition and most of the Italian
caüigraphers, who published their work, display a specimen. [112]

64. Italian caüigraphers of the first part of the sixteenth century showed a variety
of gothic scripts in their writing manuals, for despite the efforts of the human¬
ists (who were responsible for the Renaissance hands), conservative business¬
men of the time preferred such scripts to the more legible humanistic hands
displayed in the same writing books. Our example is one of a number of
gothic scripts used by businessmen shown in the writing manual Libro nuovo

d'imparare a scrivere tutte sorti lettere___published by the celebrated writing

master G. B. Palatino at Rome in 1540. In Italy one such variety of gothic
script was translated into type but was not much used, and from the 1560's
up to the time of Bodoni the Italians appear to have ceased experimenting
with either gothic or Latin scripts. [114]

65. In our example the text isa form, printed on a single sheet of vellum, granting
a licence to marriage. Mr Johnson, who was the first to record the cutting of
the hand as a type says of this form that it is set in a type which is 'a faithful
transcript of the "lettera da bolle".. .The word Collegium at the head is setin
a line of curious, rather ugly, initials,which again can be paralleled in contem¬
porary writing books.The initial С (mutilated unfortunately) includes a
woodcut of St. Peter, which certainly looks like work of the sixteenth century.
The sheet... .was probably printed about 1550, and the printer would no
doubt be the official church typographer, Antonio Biado. It seems likely that
a search in Roman archives would bring to light other specimens of the use
of this remarkable type'.

Readers will find three-quarters of the text of this form among the ex¬
amples of gothic script types : that is all our page would accommodate. But
by turning to the back of the book the whole form may be seen (very slighdy
reduced in size) reproduced as an endpaper. [116]

66. Though the Italians appear to have ceased experimenting with script types
from about the 1560's up to the time of Giovanni Battista Bodoni, interesting
experiments were made in Germany, in France, in the Netherlands and in
England, script types of both varieties being cut. In Germany during the six¬
teenth century the specimen books of the writing masters not only offered
an ordinary gothic script (currentschrift) but showed specimens of a more
formal hand used in the German Chanceries (Kanzleischriften). Some of the
latter remarks Mr Johnson 'are very like Fraktur, while others are even more
fanciful. .Two of these varieties (ofKanzleischriften—some Kanzleischriften
sloped to the left, some to the right, & some have been described as tortured)
were cut as types, the two earliest gothic scripts in Germany'.

Our example is from the German version of Donato Gianotti's history of
VeniceprintedbyHansKdianatNeuberg(ontheDanube)ini557.Thewhole
text is set in the earlier of the two scripts. Notice that some of the down strokes
in this type, which Mr Johnson has described as one of the best scripts ever
designed, are bent backwards, though it may be described as an upright letter
with capitals which are Fraktur. Гц8]

67. In sixteenth century Germany not only were the varieties of Kanzleischriften
(the formal hands used in the German Chanceries) employed as types but
a more usual form of script type (Schreibschrift) was used for book (with
Schwabacher, whichit was dark enough to accompany), &newspaper (Berlin,
1626) printing. After about 1567 no further examples of these Schreibschrifts
have been found by Mr Johnson until about a hundred years later when they
begin to appear in the specimen sheets of German typefounders.'Perhaps', he
writes 'the German printers used their scripts more in the modem fashion for
ephemeral publications, since remarkably few books have been recorded set
in script types'.

Of our three examples of Schreibschriften, reproduced by kind permission
of Dr Frans Enschedé, the first is that shown by the Jean Henry Stubenvoll
foundry, Frankfurt, in 1713, whichhowever appeared originally on the speci¬
men of Reinhard Voskens of about i66o.The second is an Enschedé letter
dated 1772 and the third was shown by John Frederic Unger, Berlin, in 1793.
The latter, though lighter and simpler than some Schreibschrifts of the mid-
sixteenth century has not changed much in design. Examples 67b and с illus¬
trate the development of German cursive handwriting during the eighteenth
century. [119]