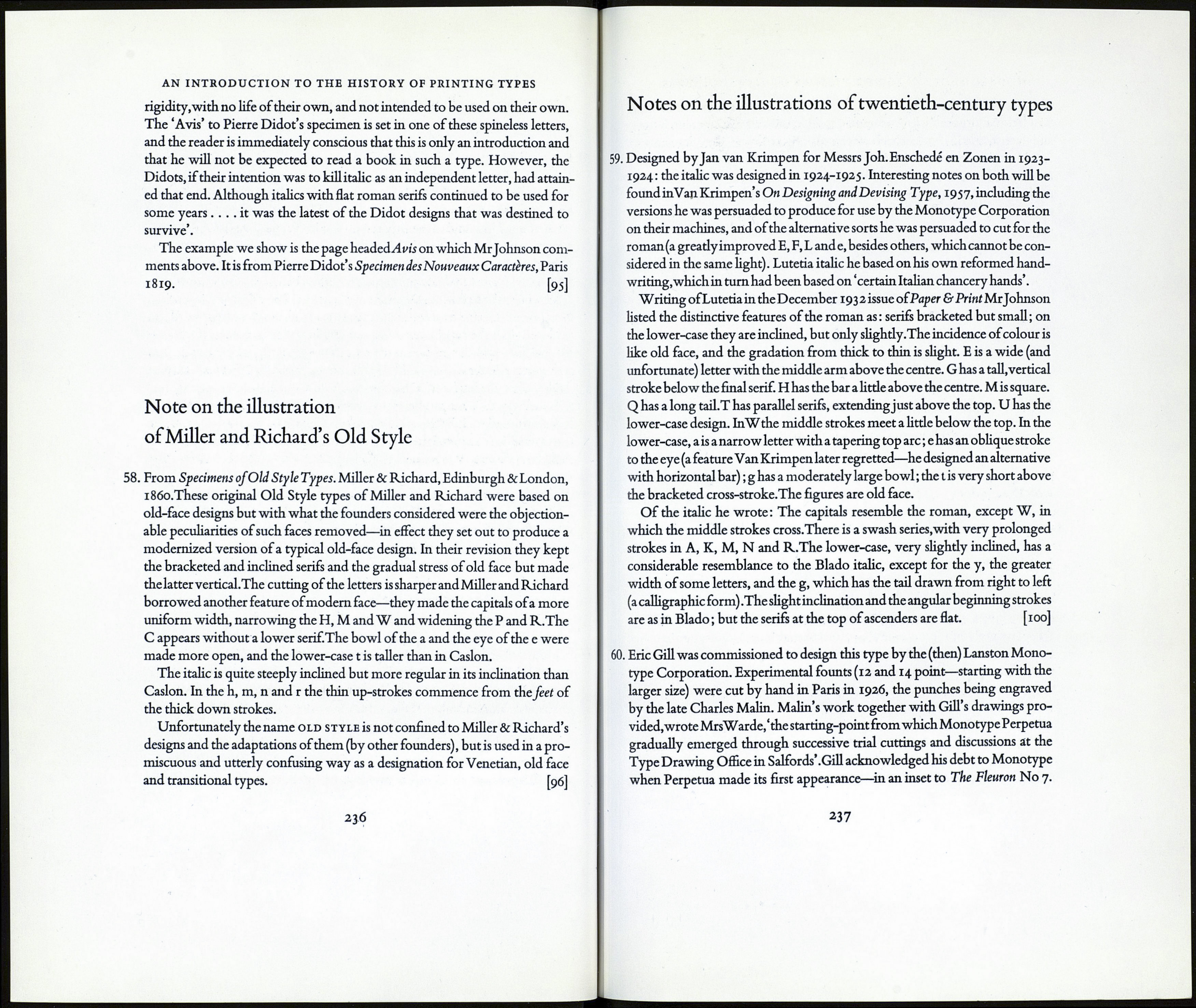 from his Essai d'une Nouvelle Typographie.....Paris 1771, is shown in our

illustration, No 36 on page 66. Luce said of his italic that he had purposely
simplified its shape ; reduced thenumber of angles ; made it narrower ; made
the connecting lines lighter & reduced the number of letters with tails (kerns).

54. From Founder's Modèles des Cararfères, Paris 1742, the introduction to which
is set almost completely (ten and a half pages of his twelve page Л vii) in the
Gros Romain or 18 point size of his italic, within, for this book, very simply
bordered pages. Notes on Fournier's italic will be found on page 89 and some
of his own interesting ideas on the design of italic type are to be read in the
page from his Avis which we show as an illustration. Basing his italic on the
formal hands of the engravers he tookinto account all the changes in the second¬
ary type introduced by Grandjean, Alexandre & Luce (the latter complained
that Founder had copied his types, proofs of which had been published in
1732) and 'carried the idea of conformity with roman further than any earlier
designer'. Though his italic was popular with European printers during the
middle of the eighteenth century it was soon superseded by the italics of the
Didots, cut to mate with their fully developed modern-face romans. [92]

55. Paragraphs from thepreface to W. Hunter's Anatomia Uteri Humani Gravidi, a
magnificent folio (paper size 25^x18$ inches) printed by John Baskerville,
Birmingham 1774. It is in Latin and English and is illustrated with over thirty
large, superbly printed plates by various engravers—both text and plates are
on a very heavy laid paper (Baskerville appears to have printed few of his
books on wove paper) .The italic is Baskerville's Great Primer size.

The design of italic types in England during the eighteenth century follow¬
ed a course, says Mr Johnson, which was similar to that of their development
in France and they 'met the same end'. But, he continues 'There is one excep¬
tion to be noted : roman serifs never appeared on an English italic......As

in the case of the modern-face roman, the beginning of the revolution (in the
design of italic type faces) is to be traced to John Baskerville. His italic has re¬
ceived much less praise than his roman ; it has been described as pinched and
wiry'. He summarizes the changes Baskerville made in designing his italic as :
It is more evenly sloped than the old face; it has the rounded a, the m and
the n shaped as in Grandjean's type—and the straight shanked h—copied from
the same source—but not Grandjean's v—a letter absent from English cur¬
sives ; the g and s are other letters, he says.which bring the Baskerville lower¬
case into close harmony with the roman ; & he notes the inconsistently retain-

ed calligraphic capitals К and N, and adds 'Baskerville's italic influenced the
design of cursives in England for the next half-century, until the introduc¬
tion of the modern face'.

How far Baskerville's influence extended as a designer of roman and italic
types may be seen by reference to the descriptive note for illustration, No 42
on page 227. [93]

56. From his Specimen of Printing Types, London 1803 .Thome's activities and his
gradual development as the founder responsible for sponsoring the full mod¬
ern face in England are briefly described in the note to illustration 49, page 230.
His specimens of the new modern-face romans introduced about the year
1800 were, writes Mr Johnson/accompanied by italics which are in several
ways parallel to the later work of the Didots in France.The serifs of the upper¬
case and of the ascenders of the lower-case are flat and unbracketed ; cursive
beginning strokes are still retained, as in all English italics, but have quite lost
the quality of flowing pen-strokes.The mechanical regularity of the slope
adds to the lifelessness of Thome's design... the tendency to over-modelling,
characteristic of nineteenth-century types, is already in evidence.The other
London founders rapidly followed Thome's example. As the English found¬
ers missed the stage of cursives with roman serifs, they arrived at the modem
italic even before their French colleagues'. [94]

57. Born in 1764, Firmin, the youngest son of François Ambroise Didot (1730-
1804) designed a modem-face italic at the age of nineteen which his brother
Pierre Didot l'ainé used to print his Epttre sur les progrès de l'imprimerie issued
in 1784. From the time of the appearance of the Didot's modern face in that
year, Firmin Didot continued to cut types with ever greater degrees of model¬
ling. Besides this increasing contrast between the thick strokes and the thin
strokes, in the Didot italics the foot serifs of the p and q have disappeared ; the
serifs at the tops of the lower-case letters are roman serifs &, unlike Fournier's,
are not bracketed, but flat both above and below and thus made to harmonize
with those of the Didot modern-face romans. Further, the slope of Firmin
Didot's italics was mechanically regular and in colour they were lighter than
Fournier's letter. Bodoni, and the German founder ErichWalbaum, followed
the Didots in designing their italics. By 1825 the modem style had become
popular in Germany.

Then the Didots changed the design of their italic. They dispensed with
the roman serifs and, says Mr Johnson 'designed the lifeless italics which were
ultimately to prevail in the nineteenth century .... cursives of mechanical