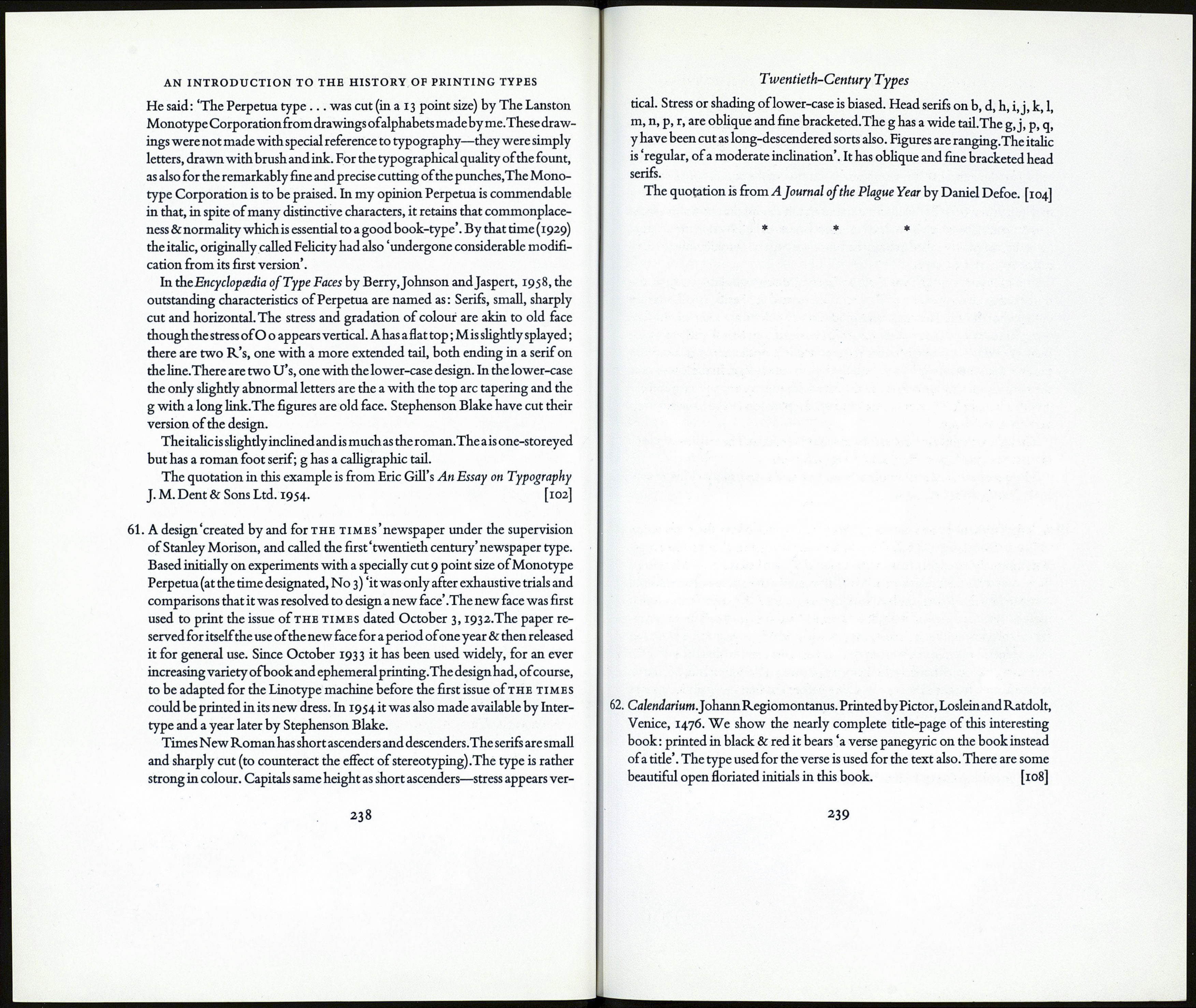 rigidity, with no life of their own, and not intended to be used on their own.
The 'Avis' to Pierre Didot's specimen is set in one of these spineless letters,
and the reader is immediately conscious that this is only an introduction and
that he will not be expected to read a book in such a type. However, the
Didots, if their intention was to killitalic as an independent letter, had attain¬
ed that end. Although italics with flat roman serifs continued to be used for
some years.... it was the latest of the Didot designs that was destined to
survive'.

The example we show is the page headed A vis on which Mr Johnson com¬
ments above. It is from Pierre Didot's Specimen des Nouveaux Caractères, Paris
1819. [95]

Note on the illustration

of Miller and Richard's Old Style

58. From Specimens of Old Style Types. Miller & Richard, Edinburgh & London,
i86o.These original Old Style types of Miller and Pvichard were based on
old-face designs but with what the founders considered were the objection¬
able peculiarities of such faces removed—in effect they set out to produce a
modernized version of a typical old-face design. In their revision they kept
the bracketed and inclined serifs and the gradual stress of old face but made
the latter vertical.The cutting of the letters is sharper and Miller and Richard
borrowed another feature of modern face—they made the capitals of a more
uniform width, narrowing the H, M and W and widening the P and R.The
С appears without a lower serif. The bowl of the a and the eye of the e were
made more open, and the lower-case t is taller than in Caslon.

The italic is quite steeply inclined but more regular in its inclination than
Caslon. In the h, m, n and r the thin up-strokes commence from the feet of
the thick down strokes.

Unfortunately the name old style is not confined to Miller & Richard's
designs and the adaptations of them (by other founders), but is used in a pro¬
miscuous and utterly confusing way as a designation for Venetian, old face
and transitional types. [96]

Notes on the illustrations of twentieth-century types

59. Designed by Jan van Krimpen for Messrs Joh.Enschedé en Zonen in 1923-
1924 : the italic was designed in 1924-1925. Interesting notes on both will be
found inVanKrimpen's On Designing and Devising Type, 1957, including the
versions he was persuaded to produce for use by the Monotype Corporation
on their machines, and of the alternative sorts he was persuaded to cut for the
roman (a gready improved E, F, L and e, besides others, which cannot be con¬
sidered in the same light). Lutetia italic he based on his own reformed hand¬
writing, which in turn had been based on 'certain Italian chancery hands'.

Writing of Lutetia in the December 1932 issue ofPaper & Print Mr Johnson
Usted the distinctive features of the roman as : serifs bracketed but small; on
the lower-case they are inclined, but only slighdy .The incidence of colour is
like old face, and the gradation from thick to thin is slight. E is a wide (and
unfortunate) letter with the middle arm above the centre. G has a tall,vertical
stroke below the final serif. H has the bar a little above the centre. M is square.
Q has a long taü.T has parallel serifs, extending just above the top. U has the
lower-case design. InWthe middle strokes meet a little below the top. In the
lower-case, a is a narrow letter with a tapering top arc ; e has an oblique stroke
to the eye (a feature Van Krimpen later regretted—he designed an alternative
with horizontal bar) ; g has a moderately large bowl ; the t is very short above
the bracketed cross-stroke.The figures are old face.

Of the italic he wrote: The capitals resemble the roman, except W, in
which the middle strokes cross.There is a swash series.with very prolonged
strokes in A, K, M, N and R.The lower-case, very slighdy inclined, has a
considerable resemblance to the Biado italic, except for the y, the greater
width of some letters, and the g, which has the tail drawn from right to left
(a calligraphic form) .The slight inclination and the angular beginning strokes
are as in Biado ; but the serifs at the top of ascenders are flat. [100]

60. Eric GUI was commissioned to design this type by the (then) Lanston Mono¬
type Corporation. Experimental founts (12 and 14 point—starting with the
larger size) were cut by hand in Paris in 1926, the punches being engraved
by the late Charles Malin. Malin's work together with Gill's drawings pro¬
vided, wrote MrsWarde.'thestarting-pointfromwhichMonotypePerpema
gradually emerged through successive trial cuttings and discussions it the
Type Drawing Office in Salfords'.Gill acknowledged his debt to Monotype
when Perpetua made its first appearance—in an inset to The Fleuron No 7.