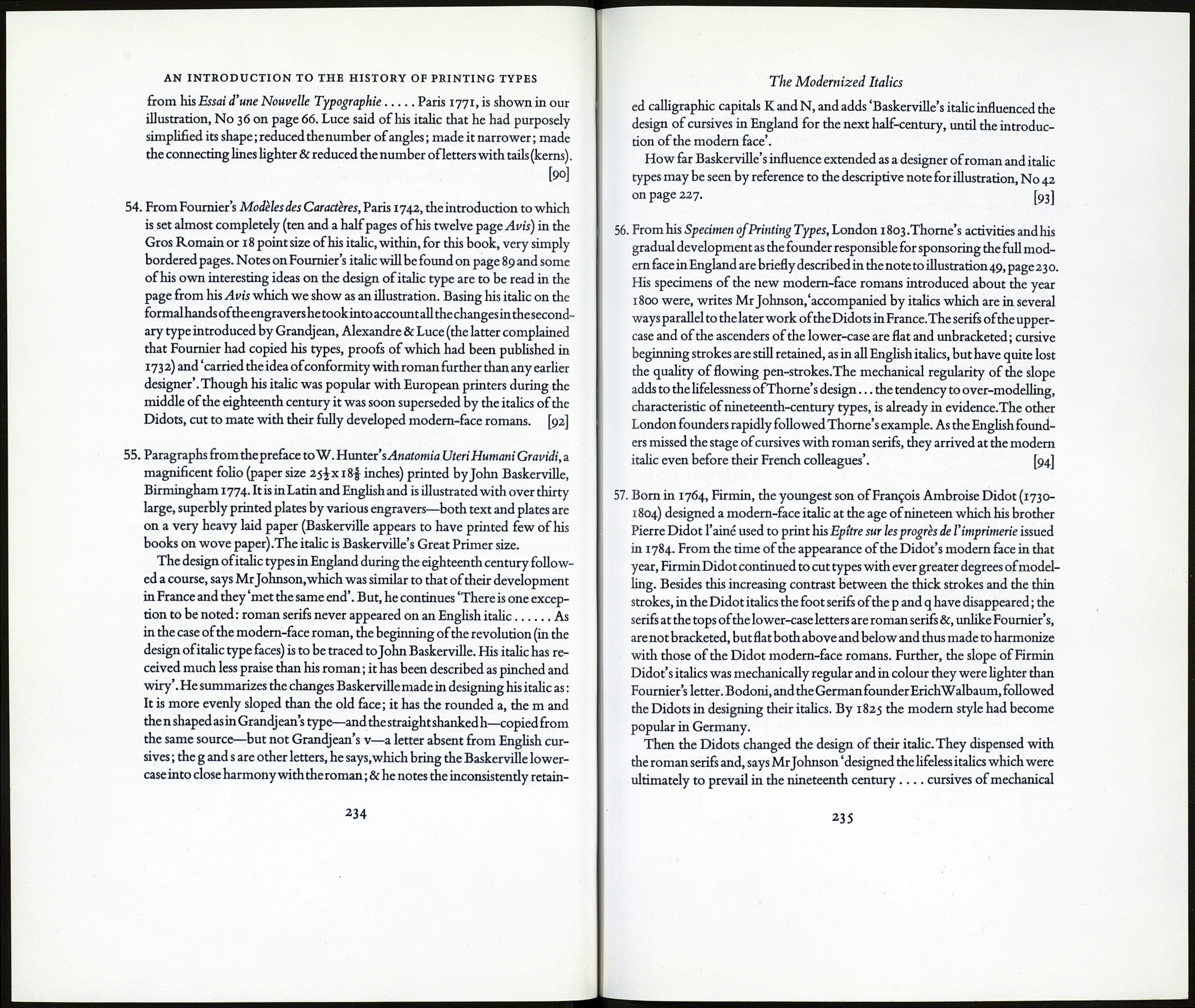 Mr Updike has an interesting chapter on the origin of pseudo-classical
types which he traces back, typographically, to beginning with the romain
du roi, and, among other things to the growing taste throughout Europe 'for
a lighter and more delicate style of typography ; sometimes arrived at by ac¬
tually cutting a lighter letter, sometimes by greater leading of the type'.
Another influence on the development of these types and of the way in which
they were arranged, was the worship during the early nineteenth century of
the antique'to the men of those days (something which was) brilliantly and
thrillinglynew'.

The printers who used these modem-face types set their tide-pages wholly
or almost wholly in different sizes of letter-spaced, widely leaded lines of
roman capitals, with no roman or italic lower-case, and often without orna¬
ment. It is in the later work of the Didots that we reach the quintessence of
the so-called classical in type face design. [84.85]

Notes on the illustrations of the modernized italics

51. During the course of the eighteenth century the design of italic types was
radically changed.The beginning of these changes dates from towards the end
of the sixteenth century when italic types were being cast on the same body
as the romans : of course, attempts had been made since before the middle of
that century to regularize the slope of both the upper- and the lower-case.

'The reform' (of italic),writes Mr Johnson,'if it may be so called, begins
with Phihppe Grandj ean' s ' ' romain du roi",with the first step in the evolution
of the modern-face roman. But already in the first half of the seventeenth
century there is one peculiar italic which may be recorded, as being in some
ways a forerunner of later developments.. .The most striking peculiarity of
the type is its condensation, and in order to achieve the condensation the de¬
signer has romanised some of his letters ; notably the m and n, in which the
shoulders are squared up.Theaalsoisarounderletter.thoughcondensed,than
the typical old-face a.'The founder of this unusual italic is unknown.When
the importation of Dutch types into this country was in full swing, that is,
roughlyinthe seventyyears(i650-i72o) preceding William Caslonl.thisitalic
was freely used in England. Our fine example of it is from the introduction
to the second edition of Philip Cluverius's Germania Antiqua, printed by the
Elzeviers at Leyden in 1631. [86]

52. While the romanizing of the unusually condensed italic described under (51)
above may simply have happened as part of the process of condensation, with
Grandjean's italic for his 'romain du roi' we find, writes Mr Johnson.'a de¬
liberate attempt to make the secondary type conform to the roman. He de¬
signed his a, m and n like those letters in the Elzevier fount ; one effect of these
forms was to remove some of the irregularity of slope from the lower case.
In the upper-case he also gave a more consistent slope to his letters .. That
Grandjean.when designing his cursive, had in mind the roman, is shown by
the fact that he introduced the straight shanked h, a form new in italic. His v
too was new, at least in typography, and remained a form peculiar to the
eighteenth century'. Our example of Grandjean's italic, the Corps 20 size, is
fromLes Caractères de l'Imprimerie Nationale by Florian le Roy. The volume
was printed in 1955. [88]

53. This example shows the italic of Louis Luce, Corps 20 size, printed by mod¬
em methods on a smooth-surfaced paper .The Petit Parangon size of his italic