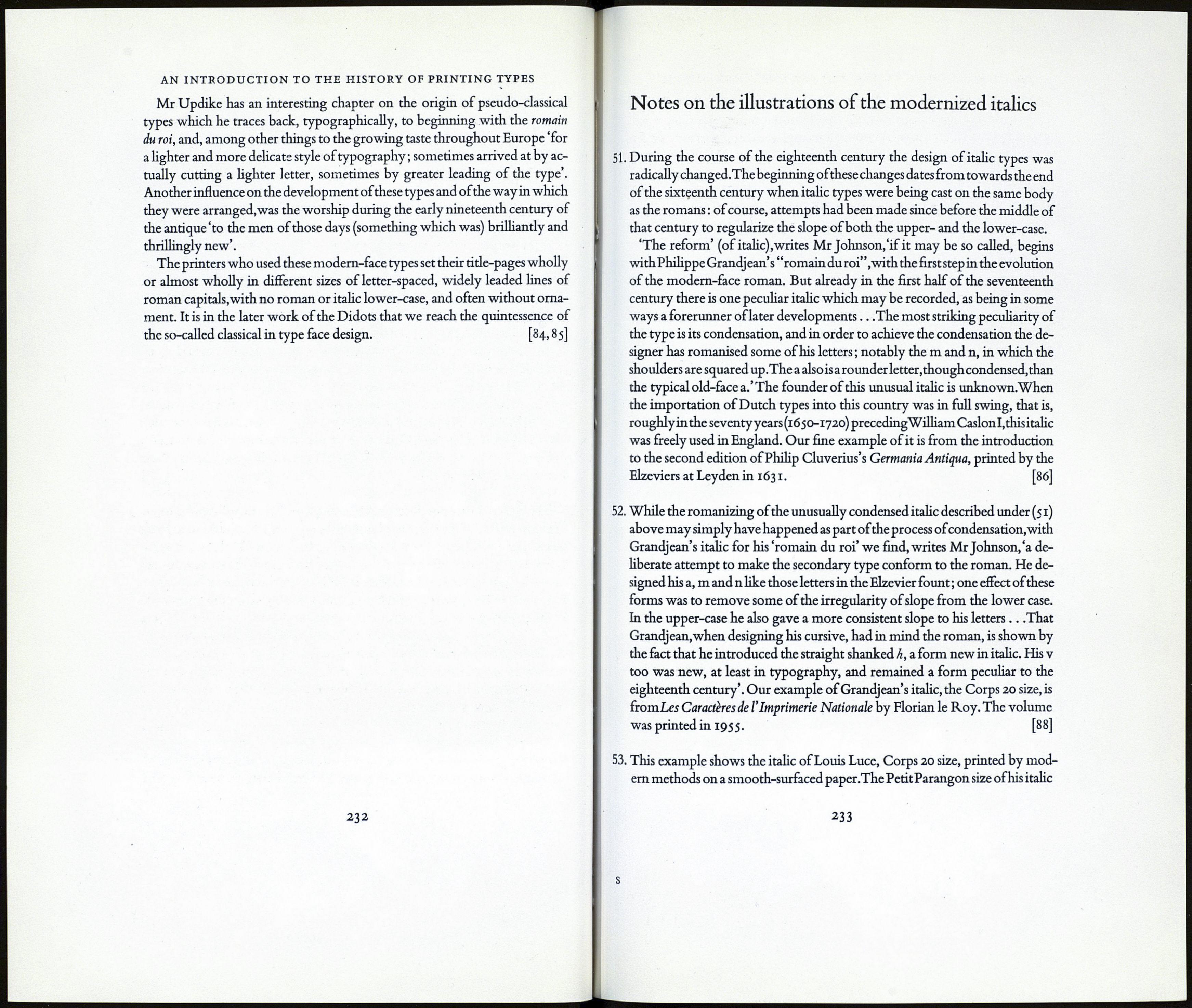 the prospectus issued in 1784 (see illustration No 46), Firmin Didot proceed¬
ed to cut types with ever greater degrees of modelling. He had cut types from
the age of nineteen ôc Mrjohnson remarks that 'His delight at his own skill
in cutting fine hair-lines led him on to an over-modelling of his types.which
became a European fashion and the hall-mark of what are called classical
types.. .The full flower of the Didot modern face can be seen in the Virgil
of 1798 & the famous Louvre editions.These books won universal, or almost
universal, praise, (& despite sharp criticism by some of his countrymen)...
The Didot modern face remained the standard letter in France, and for the

mass of books is still the normal design in use today.....and most of the

European typographers (of his day) were seduced by Didot'. Of these Bodoni
was the most famous. [80,81]

48. Page from the first of the two volumes of the Manuale Tipografico. Giovanni
Battista Bodoni, Parma 1818, completed (with the help of his foreman) and
published, after his death in 1813, by his widow. Bodoni was born at Saluzzo
in 1740, and was the son of a printer. For a time he worked in his father's press
and then struck out on his own. His work has been divided into two periods
by D.B.Updike: (1) when he employed old face or transitional types and
used decorations somewhat profusely, and (2) when he depended on his own
type-designs & unadorned typography for his effects. During the first period,
that is up to about 1780 he was greatly influenced by French printing and
especially by the work of Fournier le jeune and some of his early books are
'so far from his later style' says Mr Updike 'that it is at first sight difficult to
believe that he printed them'. But, writes Mrjohnson 'By 1787 he had cut
types like the early Didot modern faces... & his name is especially associated
with the fully developed modern face (students will note the bracketed serifs
of some of his larger sizes of capitals). This was because he was the most fa¬
mous printer in Europe in his day, although as a designer of roman types he
was never anything but an imitator of the French. His Manuale Tipografico
.... is the most sumptuous display of modern-face types in existence'. The
two quarto volumes, printed on a very beautiful smooth wove paper run to
over 500 pages & contain an enormous range of types, including exotics, and
over a thousand decorative border units, besides rules, typographic signs, etc.

49. From Robert Thome's Specimen of Printing Types, London 1803 (the last this
founder issued) .Thorne took over the foundry of Thomas Cottrell, to whom
he had been apprenticed, nine years after the latter's death in 178 5. His speci-

men book of 1794 shows 'elegantly shaped large letters' (from five- to nine-
teen-line) much of which material was, it has been surmised, based on Cottrell
models; and ordinary sized types for which Thome probably made use at
first of Cottrell's specimen book as the latter had left it.'It appears to have
been no uncommon practice in the trade', says Mrjohnson 'to make use of
a predecessor's book, corrected on the title-page in pen and ink.The St. Bride
(Library) copy of Cottrell's specimen is thus altered to the name of a broker ;
and the specimens of the Type Street Foundry (Edmund Fry) are many of
them similarly corrected to adapt them for the frequently changing style of
that firm'.

But in Thome's specimen of 1798 none of these types (except for the large
letters) remain. His new types according to Reed'more closely resembling
the beautiful faces of Jackson and Figgins. His specimen of 1798—the year
in which the full flower of the Didot modem face appeared—is indeed one
of the most elegant of which that famous decade can boast. For lightness,
grace, and uniformity, the series of romans & italics... excels that of almost
all his competitors'.

But soon all these were to be swept away, for Thome, together with other
English founders, was very soon compelled to abandon the production of
types of that kind because of the sudden public demand for types in the
' modern' style.Thome, in his specimen of 1803, in which he showed the new
letter, referred to them as Improved Printing Types and did not share the re¬
gret of his fellow founders at being forced to abandon what they regarded
as better founts ('the... entire abandonment of the time-honoured & grace¬
ful characters of the first Caslon'—among others) and indeed appears to have
enjoyed his success with the new face. In Thome's letter of 1800 (the date of
its cutting) writes Mrjohnson 'we have an undoubted modern face—which
... appears to be the first to answer (in England) the definition of modem
face which we have given (see descriptive note, illustration No 46, page 229).
So far as the evidence of the type specimen books goes.Thorne appears to
be the founder who was responsible for sponsoring the full modem face in
England'. [83]

. An example of a title-page in the so-called classical style from J. V. Millengen's

G. B. Bodoni's death. Itis one of the very few illustrations in this book which
is not in facsimile as regards size. The page size of this large folio volume
measures 21 inches deep by 14^ inches wide. The actual width of the second
line of the setting is 260 millimetres.