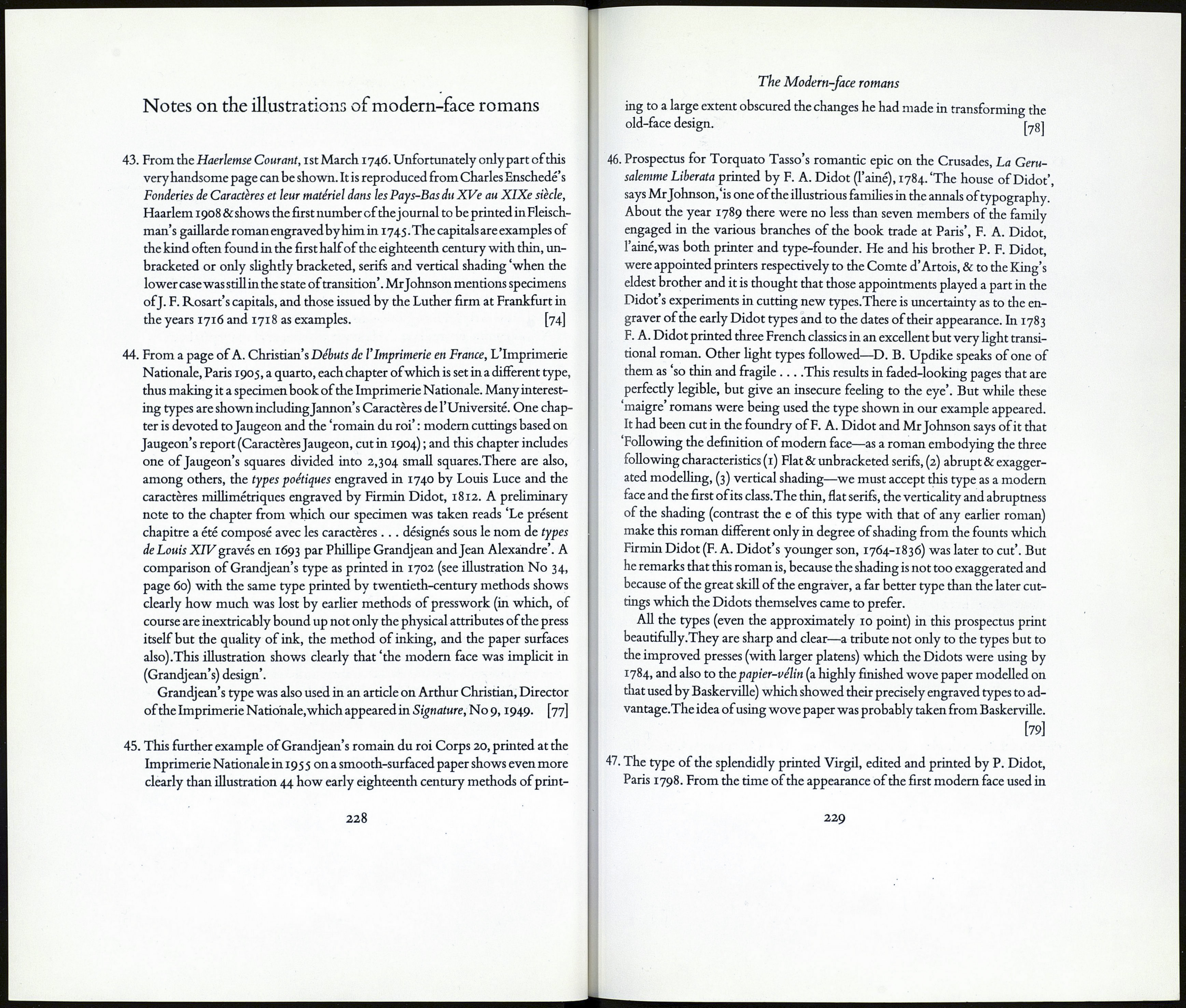 Beaujon.'He lived long enough to see his establishment the foremost and the
richest of privately-owned foundries in Europe, & when he died, at fifty-six,
he had made more changes in typography & set a more distinctive personal
mark on the printed book than anyone else of his day'. [68]

39. From Fournier le jeune's Manuel Typographique,Vo\ 2. Paris 1766.TI1ÌS I2pt
ordinary roman of Founder's is a somewhat condensed letter. It has flat bot¬
tom serifs to the b, d, u (after Grandjean), but the top serifs are not flat and
the shading is not vertical (see c, e). Despite the condensation & other changes
and the fact that there is more 'modernity' about the upper-case Mr Johnson
feels that 'on the whole the type impresses one rather as an old face. Both

type) may be looked at as an example of a transitional roman of the eighteenth
century'. [69]

40. Fournier's Manuel Typographique,ViLUs 1764/1766, was published in two vol¬
umes—it was to have been a work of four volumes but 'the author did not
live to finish it'.The first, which appeared in 1764, is a text book, devoted to
instruction in the whole art of type-founding : to complete it Fournier in¬
serted at the end of the book sixteen beautifully engraved plates showing the
instruments used by the type-founder. The second volume published two
years later, is filled with an extraordinary range of type specimens, each page
enclosed within a border. Our example is from the first volume, the body of
which is set in Fournier's very condensed Cicero(i2pt) Poétique. Mrjohnson

writes that '-----the idea of his "poétique", a condensed letter intended for

the printing of the long verses of the French Alexandrine without breaking
into a second line, was derived (both in style and name) from Luce'. Fournier
also cut a type which he called 'ceil serré', a less condensed face with shorter
descenders than the poétique type. [70]

41. From Alphabets in All the Hands by George Shelley, London ? 1710. (Engrav¬
ed by George Bickham) one of several writing books published in London
early in the eighteenth century. MrsWarde, in an article on the Baskerville
types, wrote in 1927: 'Shelley of London had published a writing book ...
in which the thickness of stroke in the roman alphabet came almost direcdy
up-and-down.The serifs, too, were at a sharper angle than any printer could
afford to press upon his soft paper, and the whole lower-case exhibited a
magnificent breadth of proportion only made possible by this increased
sharpness of outline'. [71]

42. From the Virgil, the first book printed by John Baskerville, Birmingham
1757. Baskerville, a former writing master became a type-founder (he started
work on his types in 1750) and printer. He was an admirer of the work of
his contemporary William Caslon, but in designing his types followed the
style of calligraphy fashionable in his day & produced letters which diverged
from the old-face design in several particulars. Mrjohnson has summarized
them thus : His types are rather more modelled & their shading rather more
vertical than that of the Caslon letters, (see the e). As a result of the greater
modelling the counters of the round letters are larger & the type as a whole
is lighter. But the serifs are still inclined & bracketed, nor are the thin lines
excessively thin : therefore the roman has in general much more the appear¬
ance of old face than of modem face. He notes the Q with its new tail, the
curly-tailed (in some sizes) R, the lower-case g in which the tail is not quite
closed, and the w (capital and lower-case) without a central serif.

Despite the fact that no English founder offered to buy the contents of
Baskerville's foundry on his death in 1775 (it was sold practically in its en¬
tirety to Beaumarchais at Paris in 1790: the original punches and matrices
were returned to this country in 1953, a gift from Charles Peignot to Cam¬
bridge University Press where Baskerville was for a time appointed Printer)
the leading type-founders in this country (the Fry foundry, Alexander
Wilson, William Martin, Vincent Figgins and William Caslon III copied his
types. Mrjohnson says that 'The last quarter of the eighteenth century might
well be described as the Baskerville period in English printing, both on ac¬
count of the number of Baskerville designs which had been put on the mar¬
ket and because his formula for book-production (his spaced capitals, leaded
pages and almost complete absence of ornament—traits which appeared
later in the books of the so-called classical printers) had been widely adopt¬
ed. Some of Baskerville's volumes are magnificent examples of printing and
arrangement—it was as a printer rather than as a designer of types that his
influence is said to have made itself felt on the Continent particularly on
Didot and Bodoni—but others are marred by his extraordinary spacing of
capitals, examples of which may be found in his folio Bible of 1763 partic¬
ularly in the openings to the Books of Ruth and of Job.

For an excellent account of John Baskerville students should refer to the
new, revised and enlarged edition of Talbot Baines Reed's A History of the
Old English Letter Foundries by A. F. Johnson. [72]