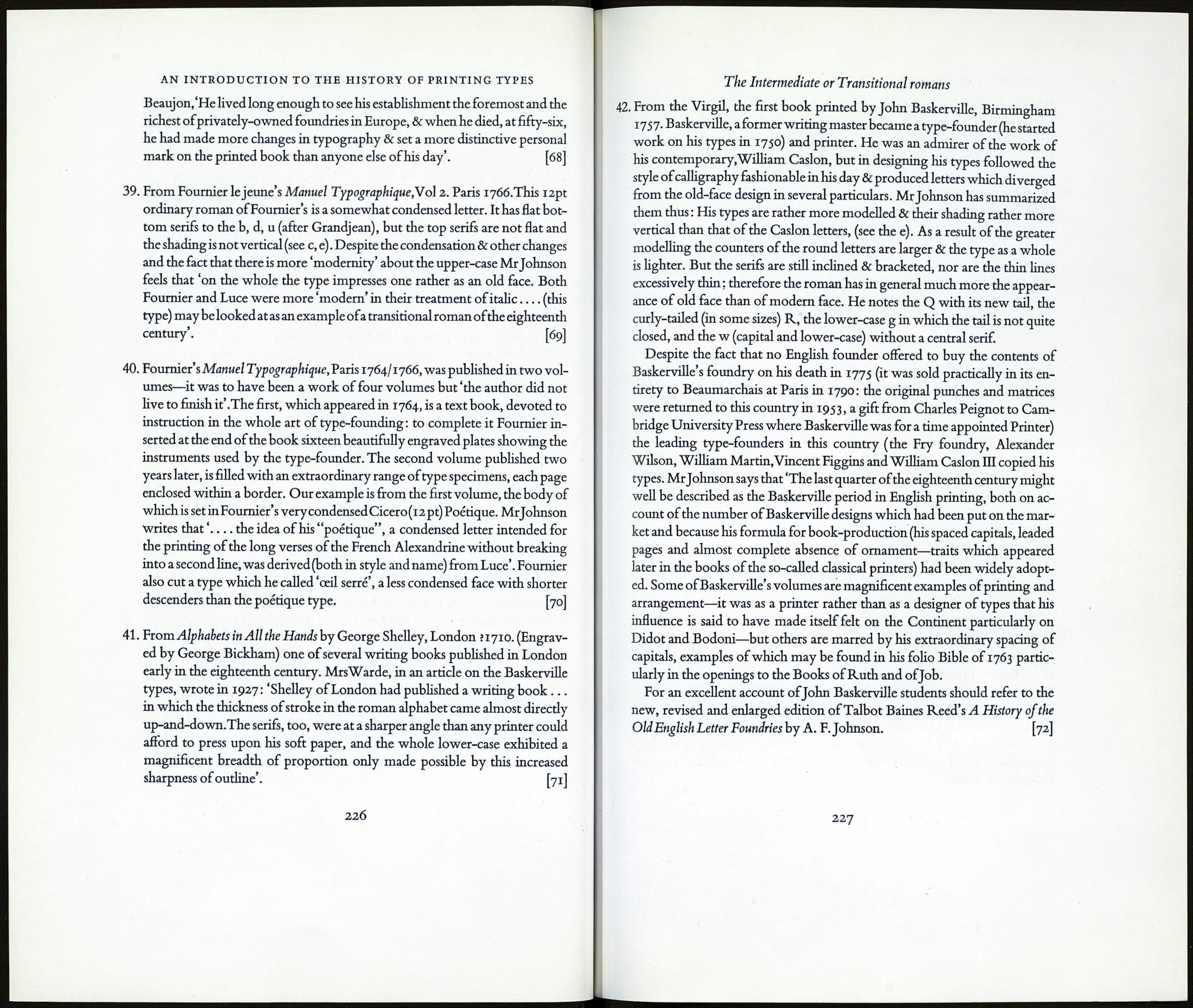 of intermediate or transitional romans

33. From the facsimile of the Espreuve de Caractères of Jean Jannon, originally
issued at Sedan in 1621 (The facsimile is edited & has an introduction by Paul
Beaujon, Paris 1927). Jannon's roman was based on Garamond, and his types,
acquired by the Imprimerie Royale in 1642 who called them their 'carac¬
tères de l'université' were, after a period of use, left lying unused for more
than 200 years and then in 1845 labelled by their owners as 'Garamond 1540'
These Jannon types have been widely copied in our own time & the resulting
designs sold under the name of'Garamond'. Paul Beaujon's brilliant, pains¬
taking enquiries cleared up the muddle which for so long enwrapped the
names and works of Claude Garamond and Jean Jannon. [58]

34. Médailles sur les principaux événements du règne de Louis le Grand. A Paris de
l'Imprimerie Royale 1702. The new type eut for Louis XIV by Philippe
Grandjean for the exclusive use of the Royal Printing House foreshadows
the style which we know as modem. Mr Johnson has listed the distinctive
features of this face (cut finally in 21 sizes of roman and italic—the best of
which were employed in the Médailles) as : Flat, unbracketed serifs. On as¬
cenders of lower-case the serifs run across to the right as well as the left.
Shading more vertical and modelling rather more than in old face. On left
of 1 there is a small flick, at one time usual in gothic faces. He thinks that this
and the cross-serifs may have been distinguishing marks.There are no hair-
lines.The modernness of the design is more evident when used with modern
methods of printing—early eighteenth century mediods almost make it ap¬
pear an old face.The 'romains du roi' were widely copied despite the fact that
type-founders were forbidden to do so. Grandjean died in 1714 and work on
his types was continued by his friend and pupil, Alexandre. [60]

35. Two of the types cut byjohann Michel Fleischman from the specimen issued
byjoh. Enschedé et Fils, Haarlem 1870. Both 'Louis Luce & Fournier derived
their taste for condensed romans from Fleischman', a German who worked
in Holland. He was with the Enschedé foundry for eighteen years. Johan
Enschedé praises Fleischman considerably in the preface to his specimen of
1768 and says that 'Seventy different founts engraved by Fleischman enrich
this foundry, including Greeks, Latins, Arabian, Malay, Black-letter and
Scripts'.

The Intermediate or Transitional romani

But D. B. Updike wrote 'His (Fleischman's) types are singularly devoid of
style, & usually show a drift toward the thinner.weaker typography which
was coming in Holland as everywhere else. But Fleischman's work was much
the fashion in the eighteenth century

Of this founder's work Mr Johnson writes that 'he has been accused of
taking all the life out of his types, an accusation which is certainly well found¬
ed in the case of his italics'.The handwritten notes on our example are by
William Blades. [62]

Alexandre's son-in-law, worked at the Imprimerie Royale and completed
the range of the 'romains du roi' by cutting the smallest size, perle. But he
also worked on his own account. In his specimen of 1771 he shows a number
of romans remarkable for their condensation & explains in what particulars
(serif treatment & condensation) they differ from the 'romains du roi'. Luce
complained that his ideas (he had, he said, published proofs of his types in
1732) had been stolen—Fournier (a better designer) not only copied his orna¬
ments but his roman and italic also. [66]

37. So that the reader may be better able to judge the qualities of the roman
designed by Luce this example is set in his Corps 20 and printed by modern
methods. It is reproduced by courtesy of M. Amoult of the Imprimerie
Nationale. [67]

38. From Fournier's splendid volume Modèles des Caractères, Paris 1742. Paul
Beaujon refers to this type as the first of the transitional faces. Fournier ex¬
plains in his Modèles why he has modified certain features in designing his
types (lining capitals with tops of lower-case ascenders, squaring the angles
of capitals and of some lower-case letters). Fournier is to be regarded as a
brilliant adapter (and sensitive improver) of the designs of others rather than
as an innovator. Tremendously industrious, in a hide over a generation, he
not only published his observations regarding a point system of measuring
type bodies, cut over eighty types, including music types, besides a wealth
of flowers & ornaments, developed what we now refer to as the type family
(he offered printers six variations of the normal roman—light, bold, con¬
densed, etc all on the same body) and though not allowed to print his books,
with the exception of his Manuel—set up the formes for some of his speci¬
mens with what exciting effects in regard to the arrangement of his orna¬
ments and flowers students of his work will have observed, but, wrote Paul