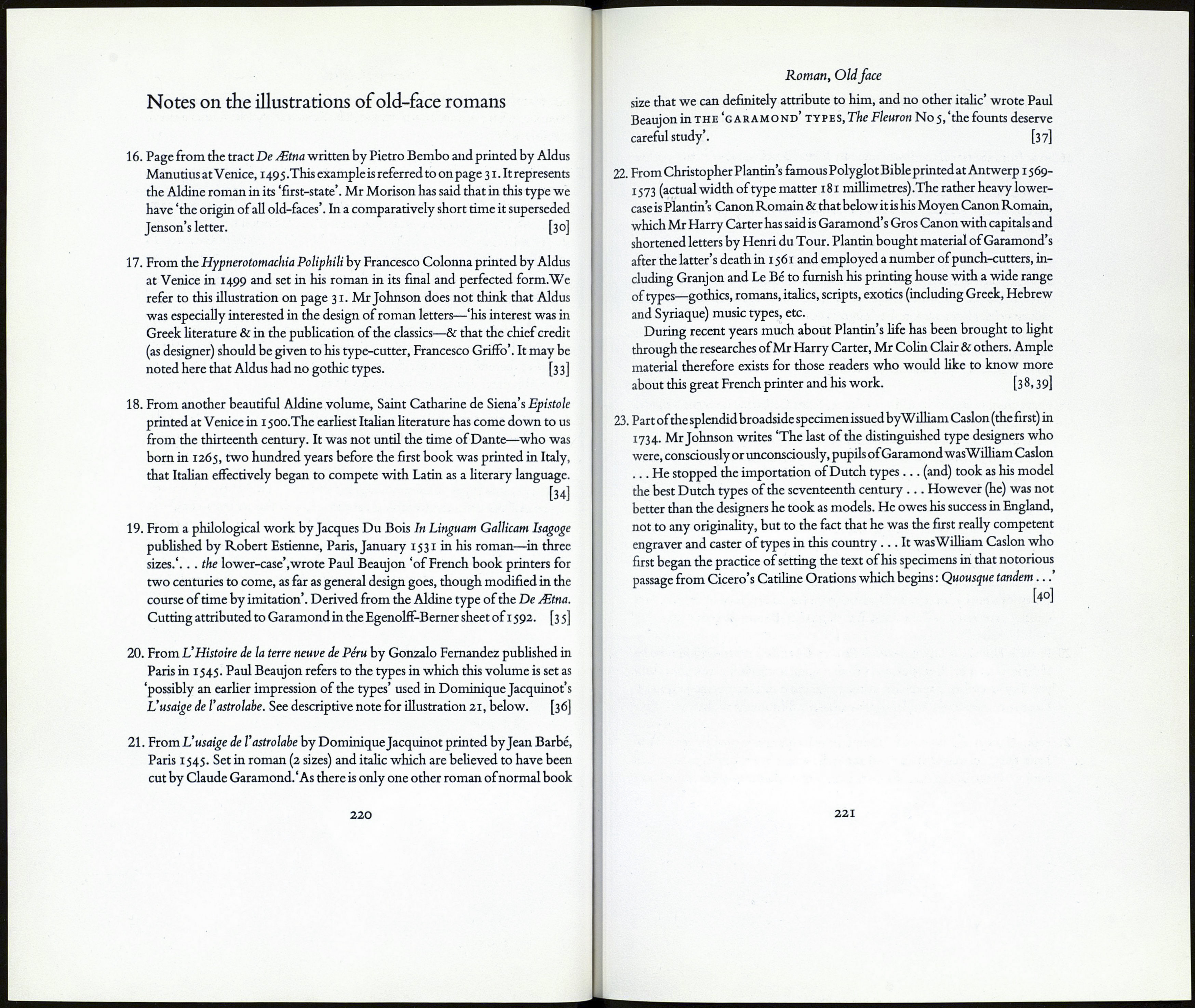 of calligraphy.The design of the letters and the competence of the engraving
and casting enable a composed page to reproduce a manuscript written in

ietterà anticha formata' (the most formal and handsome of the humanistic
book hands of the early period).This was clearly the intention, and it must
be allowed the intention was, for novices in the new art, brilliandy realized.
That it was chosen for re-cutting by St John Hornby, Robert Proctor, and
Sydney Cockerell, at the Ashendene Press, is proof enough of its outstanding
aesthetic value. It can, indeed, hardly be questioned that the Subiaco fount
is authentically humanistic'. Mr Morison concludes his article by saying that

'the Subiaco fount... is entitled to rank as the first humanistic or roman type'.
This book was also the first in which 'a real Greek type was used'. For
many years after this printers left blank spaces where Greek quotations ap¬
peared in Latin books.The Greek characters were filled in by hand. [23]

13. Part of a page from a handsome folio—Saint Augustine's De Civitate Dei—
printed by Johannes and Vindelinus de Spira at Venice in 1470.'Many roman
types of varying degrees of purity and attractiveness were used by Italian
printers of this period'wrote D.B. Updike, and.'It was reserved for John and
Wendelin de Spire to show a roman type which to-day appears roman to us.
In the fount used in the Venice editions of Cicero's Epistulœ ad Familiares and
Pliny's Historia Naturalis of John de Spire, printed in 1469, & the De Civitate
Dei printed in the next year by John and Wendelin de Spire, this very mod¬
ern quality can be clearly recognized'.The two lines immediately above the
initial have been written in in a contemporary hand—that is, a humanistic
or neo-caroline hand. [25]

14. From the De Prœparatione Evangelica of Eusebius printed by Nicolas Jenson
at Venice in i470.This fine, much-praised roman has been used as a model
by many printers and type designers including the Doves Press, and the late
Mr Bruce Rogers.who used it as a basis for his Montaigne & Centaur types.
Jenson's roman is marred by its over-large capitals which make for spotty
composition and some of his lower-case characters have been criticized also
but there is no doubt that they compose exceedingly well. [27]

15. From Appian's Roman History printed by Erhard Ratdolt at Venice in 1477
whence he had come from Augsburg.This printer's books are famous for
their fine borders and initial letters and are said to be the first with decorative
tide-pages. For an example of a part title-page printed by Ratdolt see illus¬
tration, No 62, page 108. What is presumed to be the only known example

from the fifteenth century of printing in gold ink (powdered gold being sub¬
stituted for the lampblack) appears in the dedication to the Doge in a volume
of Euclid's works printed by Ratdolt, Venice 1482. [28]