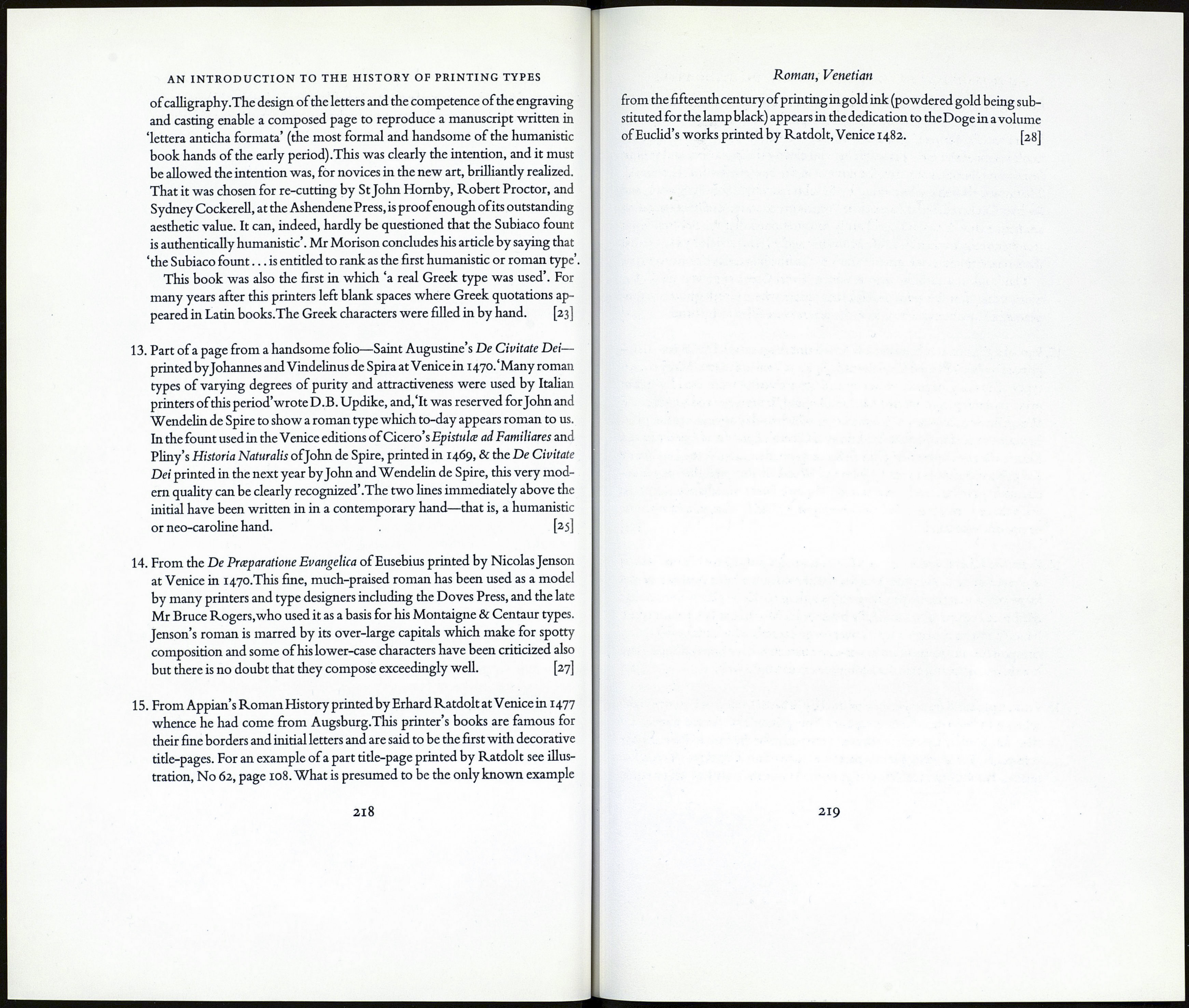 case he approached more nearly to the despised design, Schwabacher. But in
colour he went to the other extreme and by copying the lightness of roman
produced the pallidness which is the chief ground of complaint against him'

Notes on the illustrations of Venetian romans

10. From a manuscript, once at Quedlinburg, written in the Abbey of St Martin
of Tours in the early part of the 9th century. Sir Edward MaundeThompson
wrote of this MS that it 'shows the Carolingian reformed hand brought to
perfection'.The script of our example is the'consummate result' of Charle¬
magne's reform.When transcribing the works in which this hand had been
used the humanists of the Italian Renaissance,whose perseverance'had re¬
sulted in the re-discovery of numerous forgotten classical texts', modified it,
and the beautiful humanistic or neo-caroline hands thus developed from it
served the printers of fifteenth century Italy as splendid models for their types.
On page 20 we show an example of a humanistic hand. [18]

11. Part of a page of Cicero : Orationes in Verrem written on vellum by the scribe
Ioni. Venice, circa 1476. From the library of Sir Sydney Carlyle Cockerell.

The following note on Francesco Petrarca, by an anonymous hand, is ap¬
posite here. 'Petrarch, who was bom at Arezzo in 13 04, was one of the first of
the Renaissance scholars. By his studies of the classical authors he contributed
much to the revival of interest in the Greek and Roman world. He himself
wrote much in Latin & we owe to him the re-discovery of Cicero's Letters
and other classical texts.

'He was not only the first of the humanists but also one of the greatest
poets Italy has produced. It has been said of him that he has often been imi¬
tated but never equalled. Petrarch___lived at Avignon from 1313,where

his father was exiled from Florence for political reasons.The second half of
his life was spent in travel, study and political activity. He died at Arqua,
near Padua in 13 74'.

Over two hundred editions of the various works of Cicero alone were
produced in Italy before 1500 many of them by the printers of Venice who
surpassed the total output of all the other (Italian) cities combined. [20]

12. Lactantius' Opera printed by Conrad Sweynheym and Arnold Pannartz at
Subiaco, 1465, one of the first Latin books to be printed in Italy, and the first
book printed in that country to bear a date. It is in the type used by the same
printers for their edition of Cicero's De Oratore which came off the press
earlier in the same year. In an article in The Library June/September 1943,

writes :The Subiaco type presents the appearance of a truly handsome piece