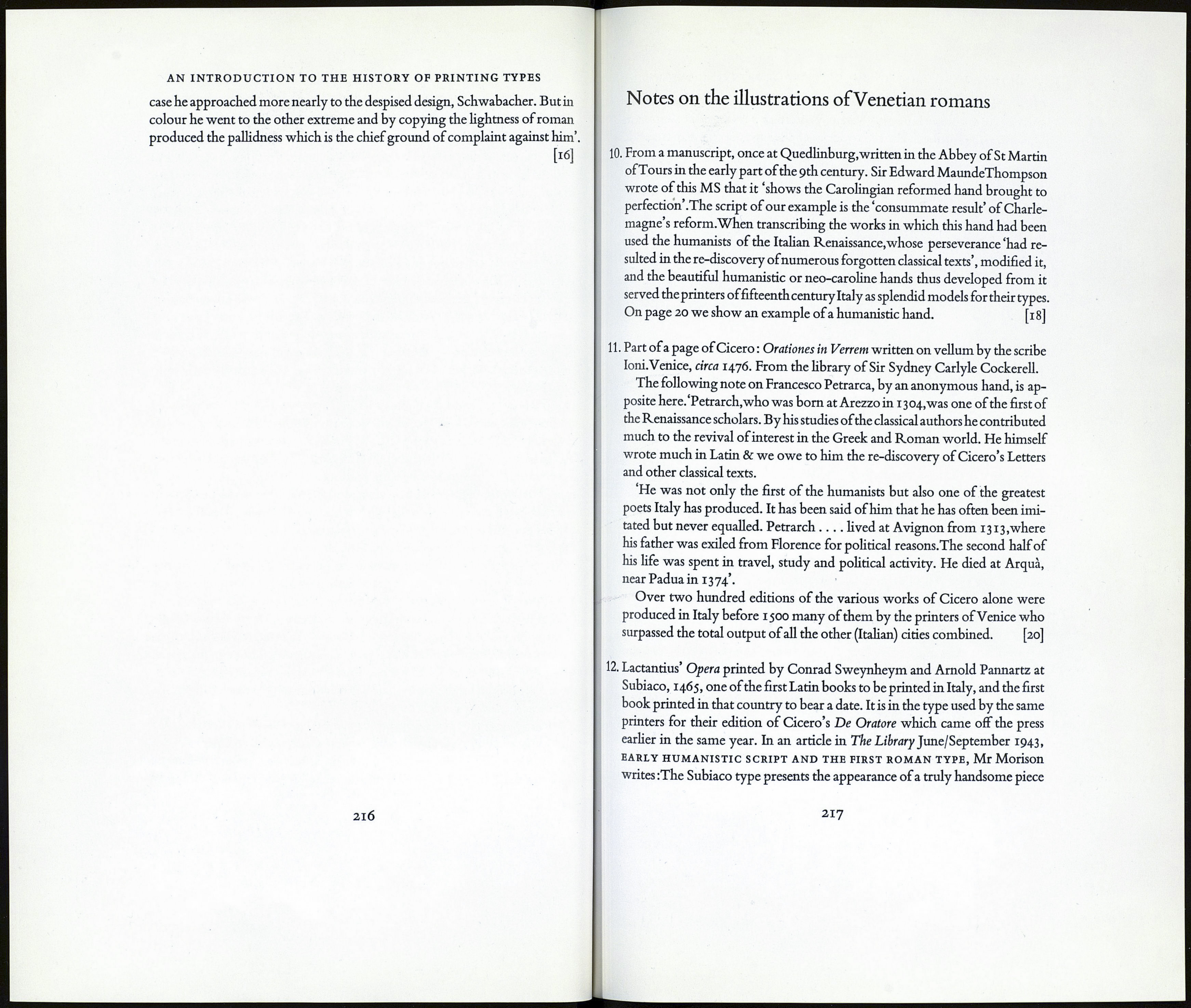 writing in 1959 said 'German printers of today have revived Schwabacher,
& it is now being used to a greater extent than at any time since the sixteenth
century'. Гц]

7. From a German passional by Jacobus de Voragine, Archbishop of Genoa,
printed by Ludwig Renchen at Cologne, 148 5.This is set in a type of the sec¬
ond definite group of Bastardas which has, says Mr Johnson 'in modern days
been given the name of the Upper-RJiine type from the district in which it
originated, and was principally used (in the Rhineland towns from Mainz
southwards with a few examples at Cologne. It was common at Basle ...).
The earliest founts... are found with Ludwig Renchen at Cologne (1484)
. . . In the lower-case the design differs from that of Schwabacher by the
presence of more looped ascenders ; in the upper-case the chief distinguishing
letter is the M ... In fact the M is the test letter, by the presence of which a
type is included in the group .. .This grouping is not altogether satisfactory
because ... the Upper-Pinne type is not essentially different in design from
Schwabacher... (it) is a convenient sub-group within the larger Schwabacher
group'. [13]

8. Writing of the third group of Bastardas Mr Johnson observes that it 'is a
genuine classification with some marked differences in design. It was of much
more local use than the others, and mainly confined to Wittenberg and the
neighbourhood, whence the name.The design appears first at Leipzig at the
press of Melchior Lotter ... m 1508. In the lower-case the distinguishing
characteristic is the shortness of the ascenders, resulting in a comparatively
large-faced type.. .Wittenberg letters vary little in size, they measure round
about 95mm. to 20 lines, that is to say, they are much the same size as the
medium sizes of Schwabacher & Upper-Rhine type.The fact that theWitten-
berg letter looks bigger is a matter of height of ascenders. For the same reason
a page in this letter has an unusually close-set appearance'. Of the capitals the
M should be noted. Printers at Magdeburg, Erfurt, Dresden, Berlin, Breslau,
& in Copenhagen (from 1559) had the type of which there were two copies.
Our example is part of a letter, dated 1510, from the press of Melchior Lotter
at Leipzig. [I5]

9. From a work by Albrecht Duerer on the proportions of the human figure.
Printed at Nuremberg in i528.This 'fourth Bastarda group is the last to ap¬
pear in type'.writes Mr Johnson 'but historically the most important... a
hand called Fraktur, meaning broken, was in use before 1450, and (there are)

instances of earlier uses.. In modern days it has been called "Deutsch". Cert¬
ainly no type hasabetter claim to be called "The GermanLetter". Duerer was
certainly closely connected with the originators.....but there is no evi¬
dence that any of the designs are due to him. In design Fraktur is a narrow and
pointed letter.. .There is a marked difference from Schwabacher in the width
of the letters & also in the serif formation of the ascenders. In Schwabacher
the b, for example, if not looped, ends blundy, but in Fraktur the ascender
runs up to a point.The upper-case is essentially a calligraphic letter, further
removed from early gothic thanis Schwabacher.The loose ends of the capitals
have been aptly called by the Germans "Schnörkel", elephants' trunks....
these and... the pointed ascenders in the lower-case (make for) a spiky and
restless design ... decidedly inferior to Schwabacher.Two reasons may be
given for the ultimate defeat of the better design by Fraktur. Just as the
Rotundas had driven Fere-humanisticas out of the printing offices, because
they were more economical of space, so again the narrower Fraktur appealed
to the printer's pocket. . . (and) the printers after 1550 actually seemed to
have preferred the fussiness of the new letter'.

'Between 1513 and 1524 eight varieties... were cut... In 1522 appeared
the first Fraktur in the design which became traditional, that of Hieronymus
Andreae of Nuremberg, designed by Neudörffer (the writing master : the
text in our example is in this type). In spite of these eight designs it was quite
a generation before Fraktur became a serious rival to Schwabacher as a text
type (but) when Sigismund Feyerabend at Frankfurt in 1560 printed the
German Bible in Fraktur, Schwabacher was doomed. By that date Frankfurt
had become the centre of the German book trade... & Fraktur had become
the fashionable type for books in the German language.

'Even before it became the normal text type, Fraktur had won popularity
as a heading type.The type-designers (and woodcutters) exaggerated the

Schnörkel of the upper-case for the purpose of decorating tide pages.....

(allowing German 17th century printers to produce the very worst title-pages
in the history of the book) .The lower-case was subjected to various experi¬
ments in condensation and in enlarging... However, the design in general
was not radically altered, and the best founders of the 18th century-----ob¬
served the original tradition ... (and) it was not until we reach Unger that
any serious attack was made on the letter'.

Johann Friedrich Unger (1753-1804) who began as a woodcutter, later
becoming a printer and typefounder in Berlin, was a friend of Firmin Didot.
He decided to reform Fraktur. He did, says Mr Johnson 'make a Fraktur as
legible as any hitherto cut; in fact, by smoothing out the angles of the lower-