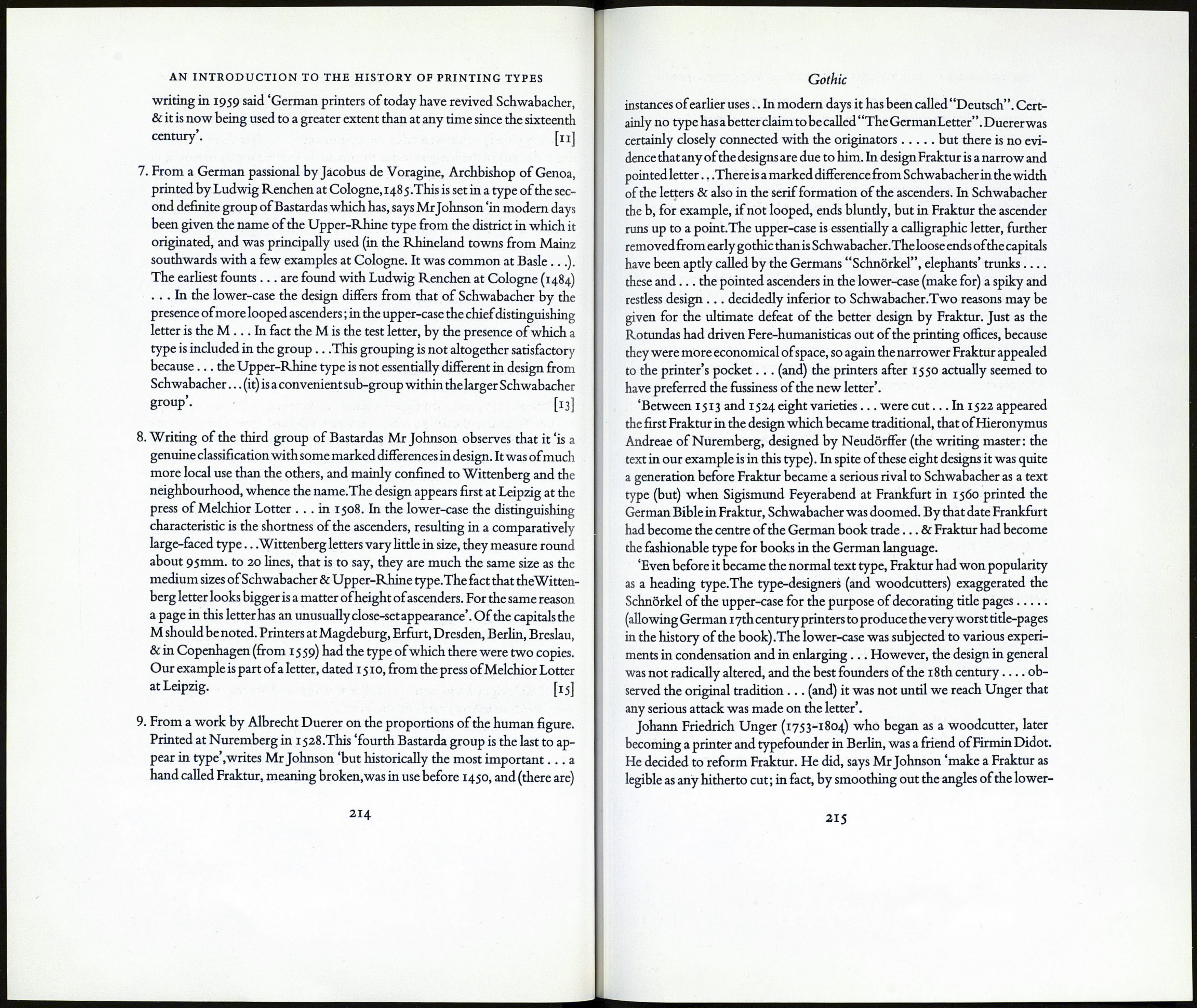 less formal designs is the Durandus type of Peter SchöfFer of 1459.TI1ÌS is a
rounder & more open letter with decenders like roman, but with neither the
serifs of roman nor the feet of Textura ; the descenders and the strokes which
end on the line, including the long s, end bluntly ; the a is open as in roman ;
the g has sometimes an open tail, but more often is shaped like the figure 8 ;
the d is found in two varieties, one like roman & the other like the rounded
gothic; ligatures of the round forms such as b & d with e and о are a charac-
teristic.The effect of the increased height of the ascenders and length of the
decenders is to add to the amount of white on the page & to impart a lighter
appearance in comparison with Textura. There is a greater differentiation
of letters and therefore increased legibility. On the other hand it still has not
the full roundness of roman. Its upper case varies considerably, and in some
cases is almost purely roman. The letter shares some characteristics of the
Renaissance and others of the Middle Ages (hence the names).. .The hand
is gothic but with considerable roman tendencies. It was the formal book-
hand of the earlier Italian humanists of the fourteenth century, and in parti¬
cular of Petrarch.....The history of the group is a short one, for after one

generation it was superseded by the Rotundas. But between 1459 and 1485
some of the finest incunables were printed in types of this class'.The French
name for this group is 'lettre de somme '. [9]

5. Page from a splendid missale speciale printed by Georg Reyser at Wurzburg
in i495.Text set in Rotunda (the Italian form of Textura) & printed in black
and orange. In the page we show, the following words and initials are in
colour—Quando cor/pus christi accipit in manus di/cat P—Et dicat ter D—
Qn/sumit dicat C.'In contrast with Textura', Mr Johnson writes,'Rotunda
is full of curves, e.g. the b, c, d, e, h, o, p, etc.The feet of Textura have in part
disappeared... In contrast with Fere-humanistica it is without the tendency
to roman, the a is closed, and the ascenders and descenders are shorter . ..
Towards the end of the fifteenth centuryits larger sizes vied with Textura for
use as heading types and in liturgical works, while the smaller sizes took the
place of the Fere-humanisticas, and finally became the stock type in Europe
for theological, legal and scholastic texts.Though round, Rotunda was not
so broad as Fere-humanistica & was thus more economical.There are many
fine books printed in Rotunda, but it suffered degradation by the end of the
(fifteenth) century ...' [10]

GENERAL NOTE ON THE VERNACULAR TYPES OR BASTARDAS

Unlike the three groups of gothic types described above the four which come
under the heading of the Bastardas are based on bastard scripts. Mr Johnson
describes a bastard script as 'current or cursive, written quickly and without
the deliberation of the texturas, Fere-humanisticas or Rotundas. It is further
characterized by its descenders running down to points... while the ascenders
are frequendy looped. A typical letter is the a, which like our italic a is one-
storeyed ... the g has the tail open.The earliest founts of this group are the
small types of the Mainz Indulgences of 1454 and 1455'.

'... die gothic Bastardas, were confined to the countries north of the Alps,
and the chief variety outside Germany was the national French hand, the
'lettre bâtarde which... passed out of use about the middle of the sixteenth
century ; but in Germany the Bastarda has remained the national type, at first
in the variety known as Schwabacher, and afterwards in the more familiar
Fraktur'. Mr Morisonhas described the Bastardas as 'scripts answering to the
need for a speedy letter appropriate for the copying of books or documents
of minor value or importance'.

6. From a slim volume by Conradus Celtes, printed by Friedrich Kreusner at
Nuremberg, circa 1487 in a type (first used 2 years earlier) which became 'the
most popular German type for books in the vernacular & received the name

Bastarda characteristics, the closed, one-storeyed a, the pointed descenders
to (long) s and f ; the tail of the g is open ; the b, d and h are sometimes looped
and sometimes not.The design of the upper-case as well as that of the lower¬
case is fixed, with few variations. In all the earlier gothic founts the variations
among majuscules are so numerous as to defy classification.The upper-case
was a separate fount, often revealing litde attempt at harmony with the lower¬
case. But with these later Bastardas we can take account of the capitals also
in defining groups... (note in Schwabacher the M, A and S)... Finally in
colour, throughout its history, the letter was essentially black.. There were
roughly only three sizes of Schwabacher'.

'Of the three German Bastardas which preceded Fraktur, Schwabacher
was easily the most widespread. In Nuremberg, where it originated, it is all
but universal. Schwabacher, together with its variant the Upper-Rnine type,
remained the standard German text type down to about 1550... In the sec¬
ond half of the century it declined into its ultimate position as a secondary
type, used in much the same way as italic was used with roman'. Mr Johnson