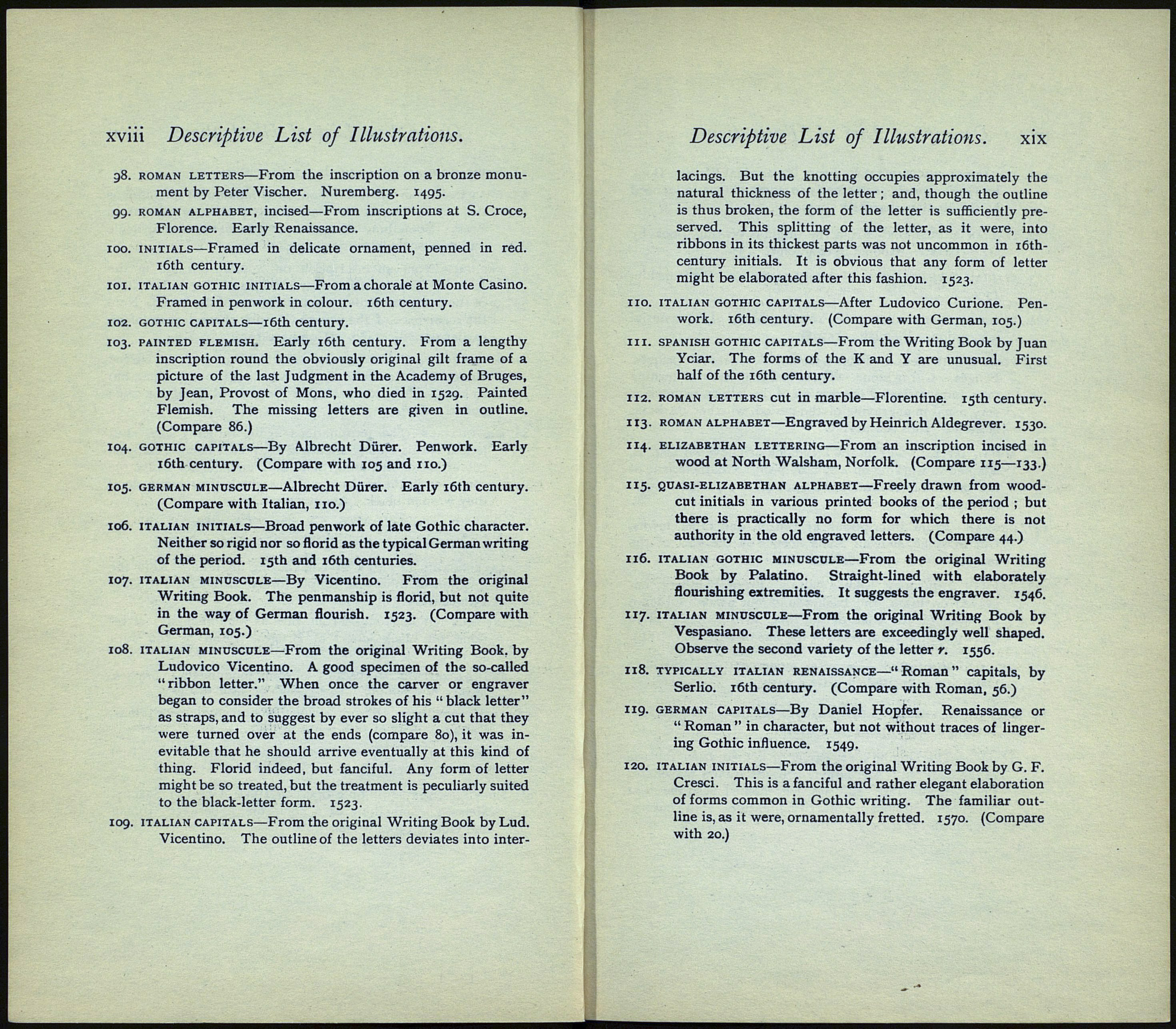 inscription round the obviously original gilt frame of a
picture of the last Judgment in the Academy of Bruges,
by Jean, Provost of Mons, who died in 1529. Painted
Flemish. The missing letters are given in outline.
(Compare 86.)

(Compare with Italian, no.)

Neither so rigid nor so florid as the typical German writing
of the period. 15th and 16th centuries.

107. Italian minuscule—By Vicentino. From the original

Writing Book. The penmanship is florid, but not quite
in the way of German flourish. 1523. (Compare with
German, 105.)

Ludovico Vicentino. A good specimen of the so-called
"ribbon letter." When once the carver or engraver
began to consider the broad strokes of his " black letter"
as straps, and to suggest by ever so slight a cut that they
were turned over at the ends (compare 80), it was in¬
evitable that he should arrive eventually at this kind of
thing. Florid indeed, but fanciful. Any form of letter
might be so treated, but the treatment is peculiarly suited
to the black-letter form. 1523.

Vicentino. The outline of the letters deviates into inter-

lacings. But the knotting occupies approximately the
natural thickness of the letter ; and, though the outline
is thus broken, the form of the letter is sufficiently pre¬
served. This splitting of the letter, as it were, into
ribbons in its thickest parts was not uncommon in 16th-
century initials. It is obvious that any form of letter
might be elaborated after this fashion. 1523.

in. Spanish gothic capitals—From the Writing Book by Juan
Yciar. The forms of the К and Y are unusual. First
half of the 16th century.

114. Elizabethan lettering—From an inscription incised in

cut initials in various printed books of the period ; but
there is practically no form for which there is not
authority in the old engraved letters. (Compare 44.)

Book by Palatino. Straight-lined with elaborately
flourishing extremities. It suggests the engraver. 1546.

Vespasiano. These letters are exceedingly well shaped.
Observe the second variety of the letter r. 1556.

" Roman " in character, but not without traces of linger¬
ing Gothic influence. 1549.

Cresci. This is a fanciful and rather elegant elaboration
of forms common in Gothic writing. The familiar out¬
line is, as it were, ornamentally fretted. 1570. (Compare
with 20.)