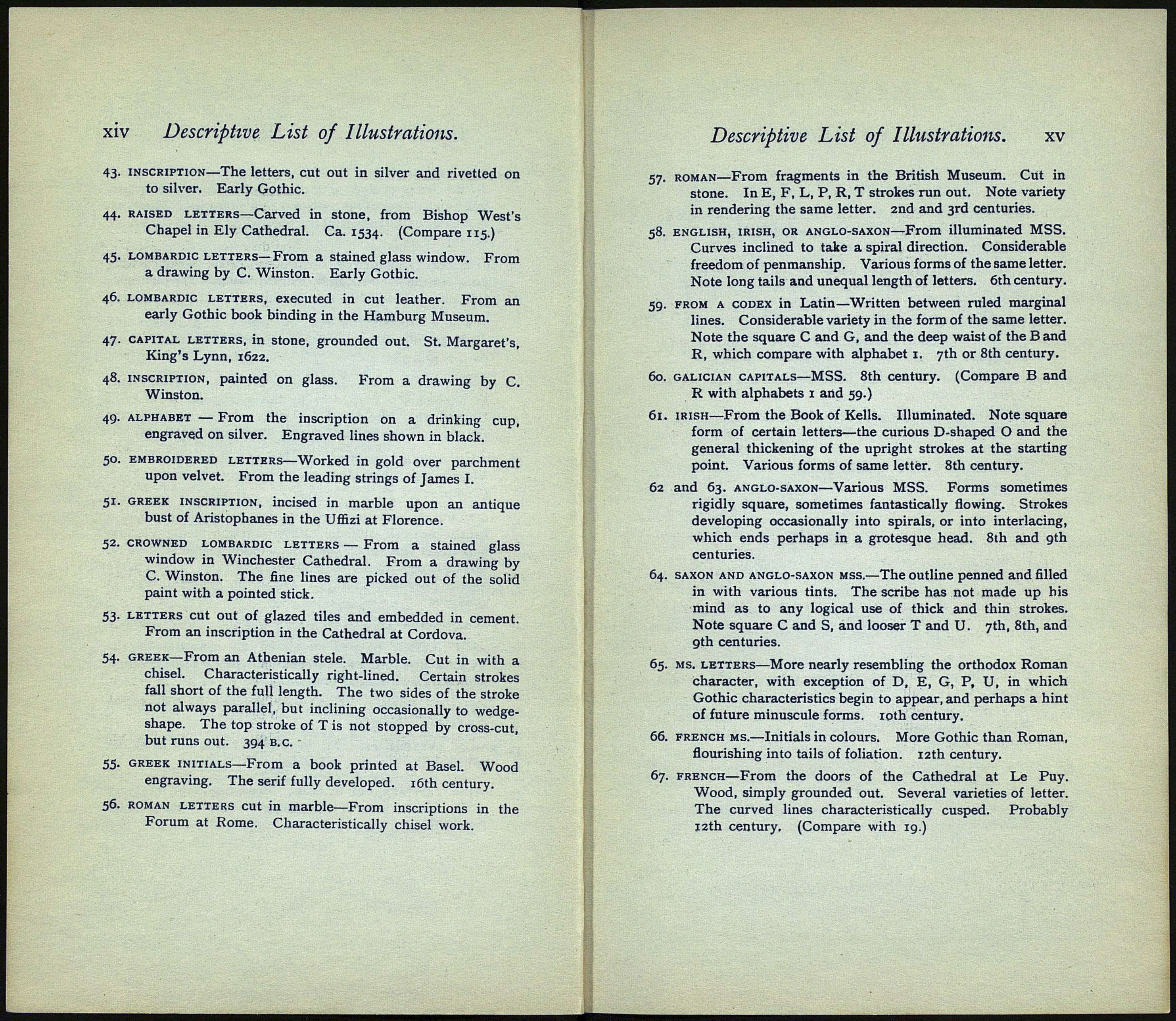 43- inscription—The letters, cut out in silver and rivetted on
to silver. Early Gothic.

46. lombardic letters, executed in cut leather. From an

48. inscription, painted on glass. From a drawing by C.

49. alphabet — From the inscription on a drinking cup,

50. embroidered letters—Worked in gold over parchment

upon velvet. From the leading strings of James I.

51. greek inscription, incised in marble upon an antique

bust of Aristophanes in the Uffizi at Florence.

window in Winchester Cathedral. From a drawing by
С Winston. The fine lines are picked out of the solid
paint with a pointed stick.

53. letters cut out of glazed tiles and embedded in cement.

From an inscription in the Cathedral at Cordova.

54. greek—From an Athenian stele. Marble. Cut in with a

chisel. Characteristically right-lined. Certain strokes
fall short of the full length. The two sides of the stroke
not always parallel, but inclining occasionally to wedge-
shape. The top stroke of T is not stopped by cross-cut,
but runs out. 394 b.c. -

56. roman letters cut in marble—From inscriptions in the

57. roman—From fragments in the British Museum. Cut in

59. from a codex in Latin—Written between ruled marginal

lines. Considerable variety in the form of the same letter.
Note the square С and G, and the deep waist of the В and
R, which compare with alphabet 1. 7th or 8th century.

form of certain letters—the curious D-shaped О and the
general thickening of the upright strokes at the starting
point. Various forms of same letter. 8th century.

in with various tints. The scribe has not made up his
mind as to any logical use of thick and thin strokes.
Note square С and S, and looser T and U. 7th, 8th, and
9th centuries.

character, with exception of D, E, G, P, U, in which
Gothic characteristics begin to appear, and perhaps a hint
of future minuscule forms. 10th century.

67. French—From the doors of the Cathedral at Le Puy.