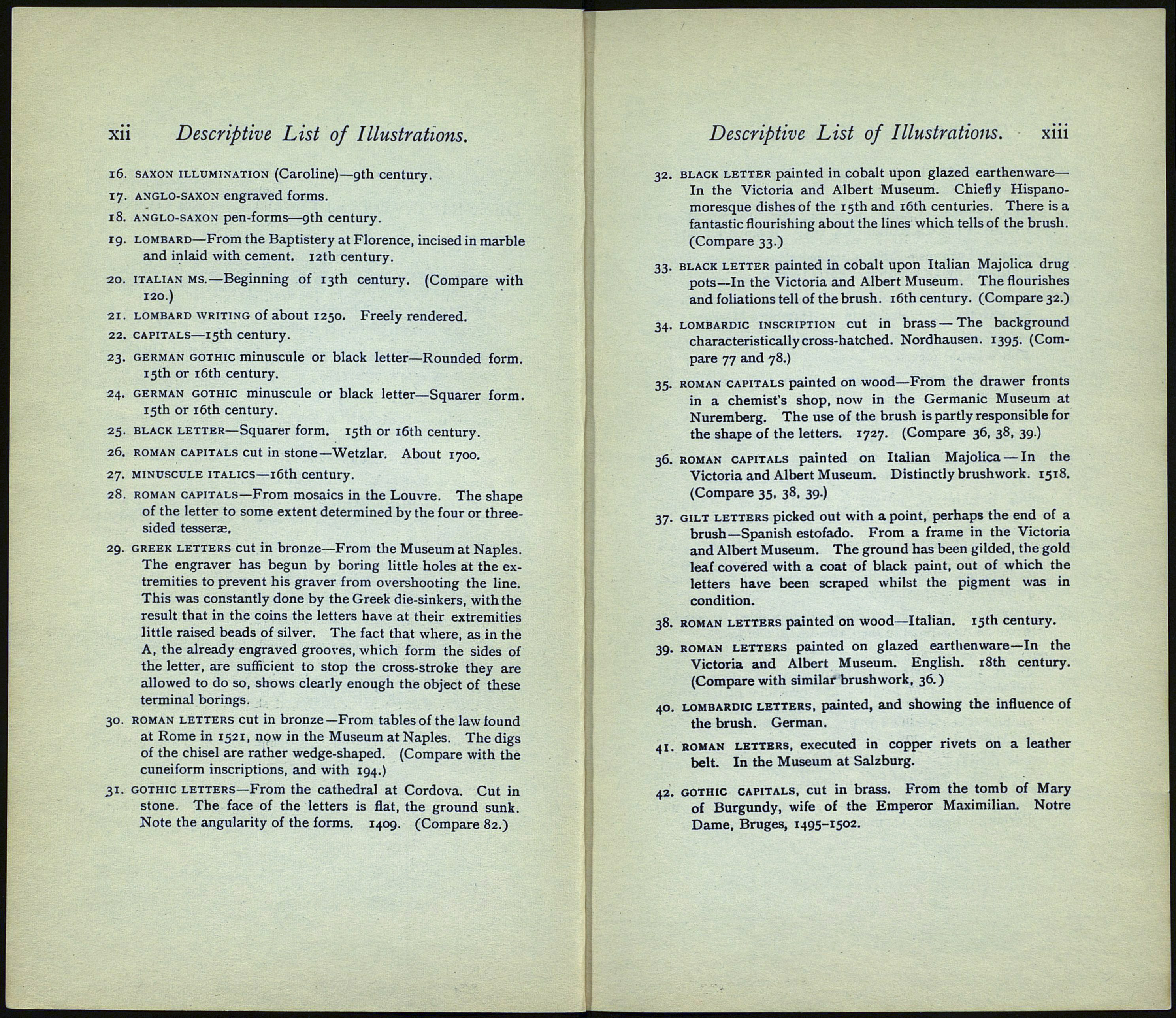 19. lombard—From the Baptistery at Florence, incised in marble

and inlaid with cement. 12th century.

28. roman capitals—From mosaics in the Louvre. The shape

of the letter to some extent determined by the four or three-
sided tesserae.

29. greek letters cut in bronze—From the Museum at Naples.

The engraver has begun by boring little holes at the ex¬
tremities to prevent his graver from overshooting the line.
This was constantly done by the Greek die-sinkers, with the
result that in the coins the letters have at their extremities
little raised beads of silver. The fact that where, as in the
A, the already engraved grooves, which form the sides of
the letter, are sufficient to stop the cross-stroke they are
allowed to do so, shows clearly enough the object of these
terminal borings.

30. roman letters cut in bronze— From tables of the law found

at Rome in 1521, now in the Museum at Naples. The digs
of the chisel are rather wedge-shaped. (Compare with the
cuneiform inscriptions, and with 194.)

31. gothic letters—From the cathedral at Cordova. Cut in

stone. The face of the letters is flat, the ground sunk.
Note the angularity of the forms. 1409. (Compare 82.)

In the Victoria and Albert Museum. Chiefly Hispano-
moresque dishes of the 15th and 16th centuries. There is a
fantastic flourishing about the lines which tells of the brush.
(Compare 33.)

pots—In the Victoria and Albert Museum. The flourishes
and foliations tell of the brush. 16th century. (Compare 32.)

36. roman capitals painted on Italian Majolica — In the

37. gilt letters picked out with a point, perhaps the end of a

brush—Spanish estofado. From a frame in the Victoria
and Albert Museum. The ground has been gilded, the gold
leaf covered with a coat of black paint, out of which the
letters have been scraped whilst the pigment was in
condition.

40. lombardic letters, painted, and showing the influence of

41. roman letters, executed in copper rivets on a leather

belt. In the Museum at Salzburg.

42. gothic capitals, cut in brass. From the tomb of Mary