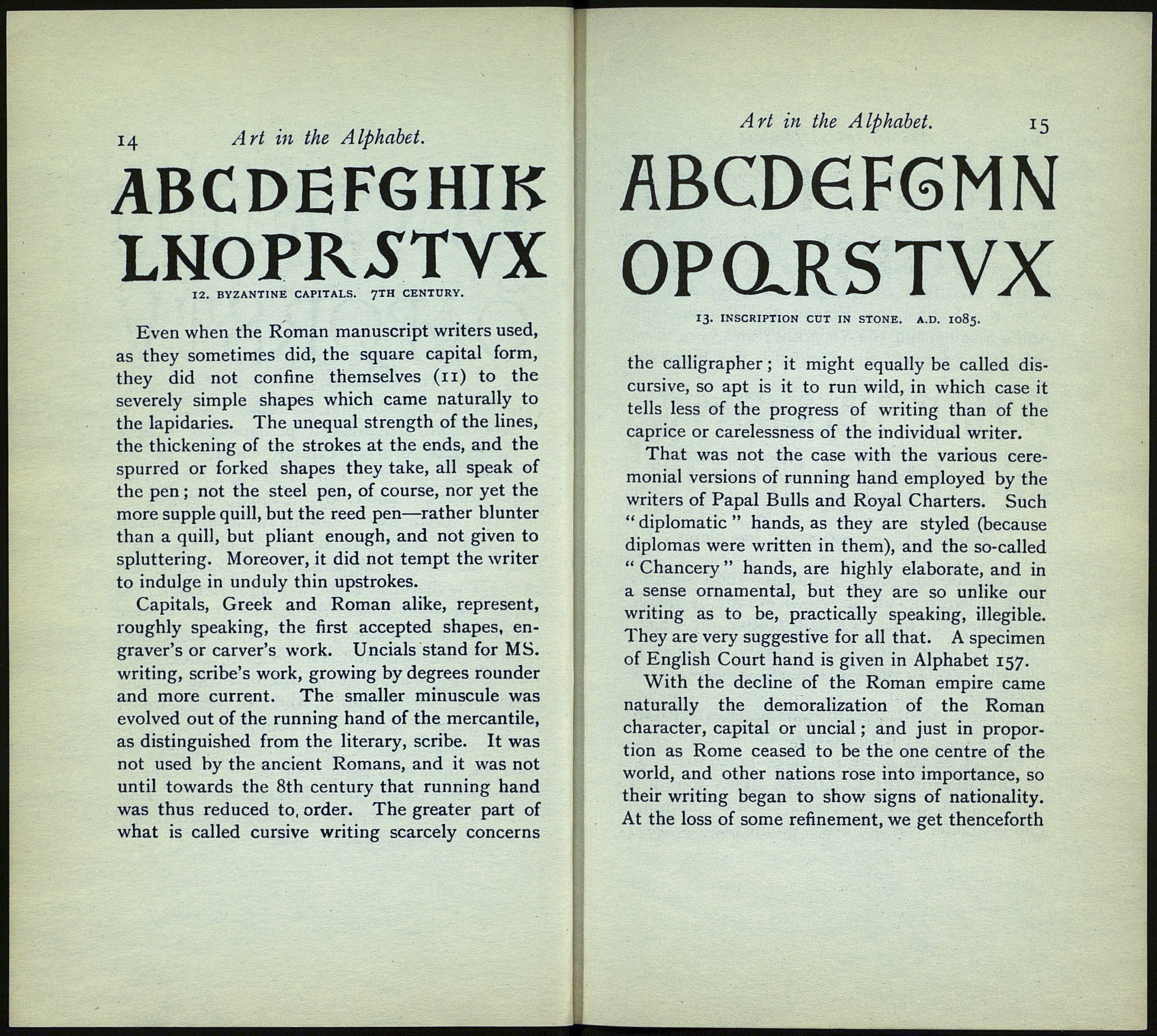 Even when the Roman manuscript writers used,
as they sometimes did, the square capital form,
they did not confine themselves (n) to the
severely simple shapes which came naturally to
the lapidaries. The unequal strength of the lines,
the thickening of the strokes at the ends, and the
spurred or forked shapes they take, all speak of
the pen ; not the steel pen, of course, nor yet the
more supple quill, but the reed pen—rather blunter
than a quill, but pliant enough, and not given to
spluttering. Moreover, it did not tempt the writer
to indulge in unduly thin upstrokes.

Capitals, Greek and Roman alike, represent,
roughly speaking, the first accepted shapes, en¬
graver's or carver's work. Uncials stand for MS.
writing, scribe's work, growing by degrees rounder
and more current. The smaller minuscule was
evolved out of the running hand of the mercantile,
as distinguished from the literary, scribe. It was
not used by the ancient Romans, and it was not
until towards the 8th century that running hand
was thus reduced to, order. The greater part of
what is called cursive writing scarcely concerns

the calligraphier ; it might equally be called dis¬
cursive, so apt is it to run wild, in which case it
tells less of the progress of writing than of the
caprice or carelessness of the individual writer.

That was not the case with the various cere¬
monial versions of running hand employed by the
writers of Papal Bulls and Royal Charters. Such
" diplomatic " hands, as they are styled (because
diplomas were written in them), and the so-called
" Chancery " hands, are highly elaborate, and in
a sense ornamental, but they are so unlike our
writing as to be, practically speaking, illegible.
They are very suggestive for all that. A specimen
of English Court hand is given in Alphabet 157.

With the decline of the Roman empire came
naturally the demoralization of the Roman
character, capital or uncial ; and just in propor¬
tion as Rome ceased to be the one centre of the
world, and other nations rose into importance, so
their writing began to show signs of nationality.
At the loss of some refinement, we get thenceforth