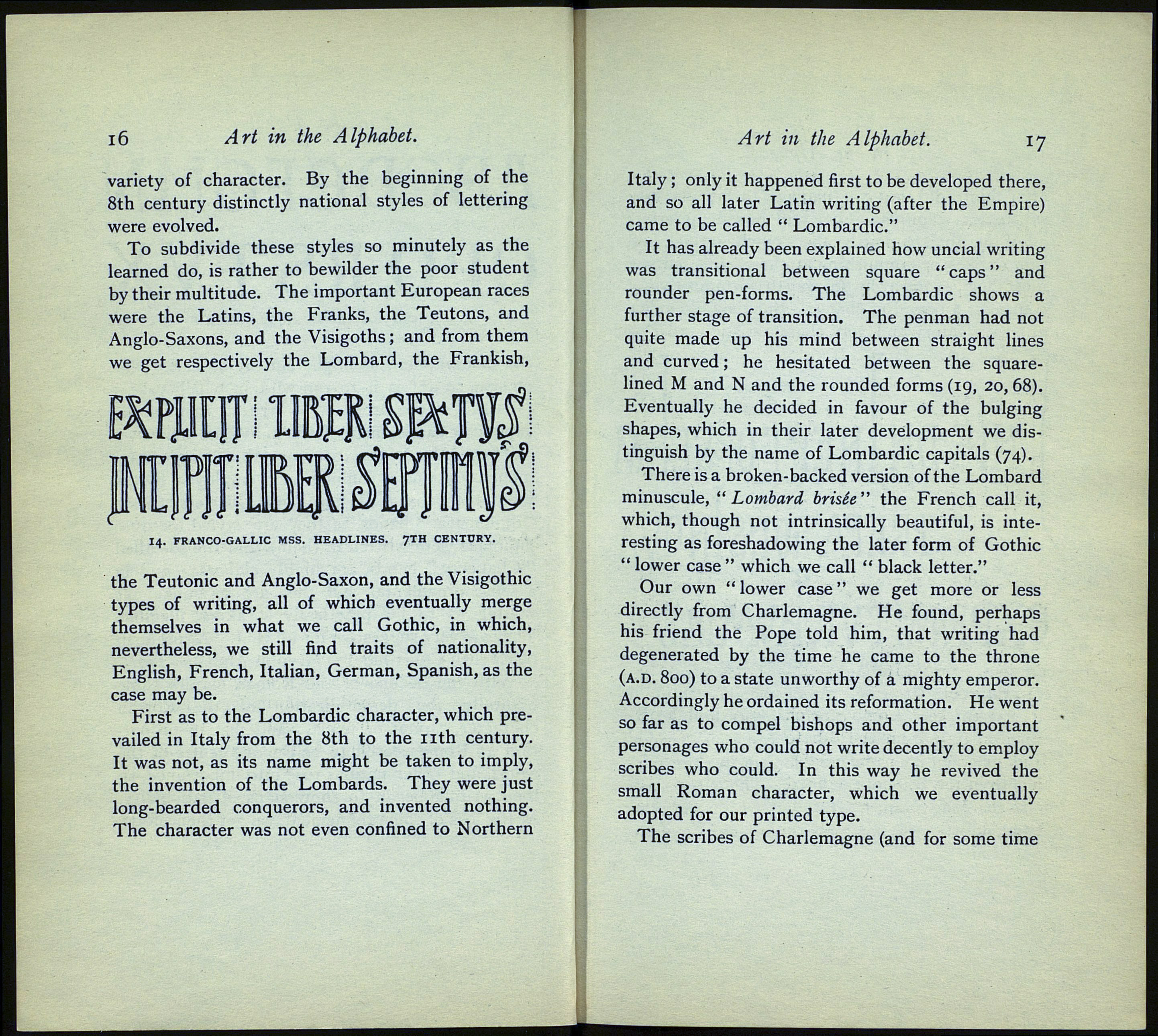 variety of character. By the beginning of the
8th century distinctly national styles of lettering
were evolved.

To subdivide these styles so minutely as the
learned do, is rather to bewilder the poor student
by their multitude. The important European races
were the Latins, the Franks, the Teutons, and
Anglo-Saxons, and the Visigoths ; and from them
we get respectively the Lombard, the Frankish,

the Teutonic and Anglo-Saxon, and the Visigothic
types of writing, all of which eventually merge
themselves in what we call Gothic, in which,
nevertheless, we still find traits of nationality,
English, French, Italian, German, Spanish, as the
case may be.

First as to the Lombardie character, which pre¬
vailed in Italy from the 8th to the nth century.
It was not, as its name might be taken to imply,
the invention of the Lombards. They were just
long-bearded conquerors, and invented nothing.
The character was not even confined to Northern

Italy ; only it happened first to be developed there,
and so all later Latin writing (after the Empire)
came to be called " Lombardie."

It has already been explained how uncial writing
was transitional between square "caps" and
rounder pen-forms. The Lombardie shows a
further stage of transition. The penman had not
quite made up his mind between straight lines
and curved ; he hesitated between the square-
lined M and N and the rounded forms (19, 20,68).
Eventually he decided in favour of the bulging
shapes, which in their later development we dis¬
tinguish by the name of Lombardie capitals (74).

There is a broken-backed version of the Lombard
minuscule, "Lombard brisée" the French call it,
which, though not intrinsically beautiful, is inte¬
resting as foreshadowing the later form of Gothic
" lower case " which we call " black letter."

Our own " lower case " we get more or less
directly from Charlemagne. He found, perhaps
his friend the Pope told him, that writing had
degenerated by the time he came to the throne
(a.D. 800) to a state unworthy of a mighty emperor.
Accordingly he ordained its reformation. He went
so far as to compel bishops and other important
personages who could not write decently to employ
scribes who could. In this way he revived the
small Roman character, which we eventually
adopted for our printed type.

The scribes of Charlemagne (and for some time