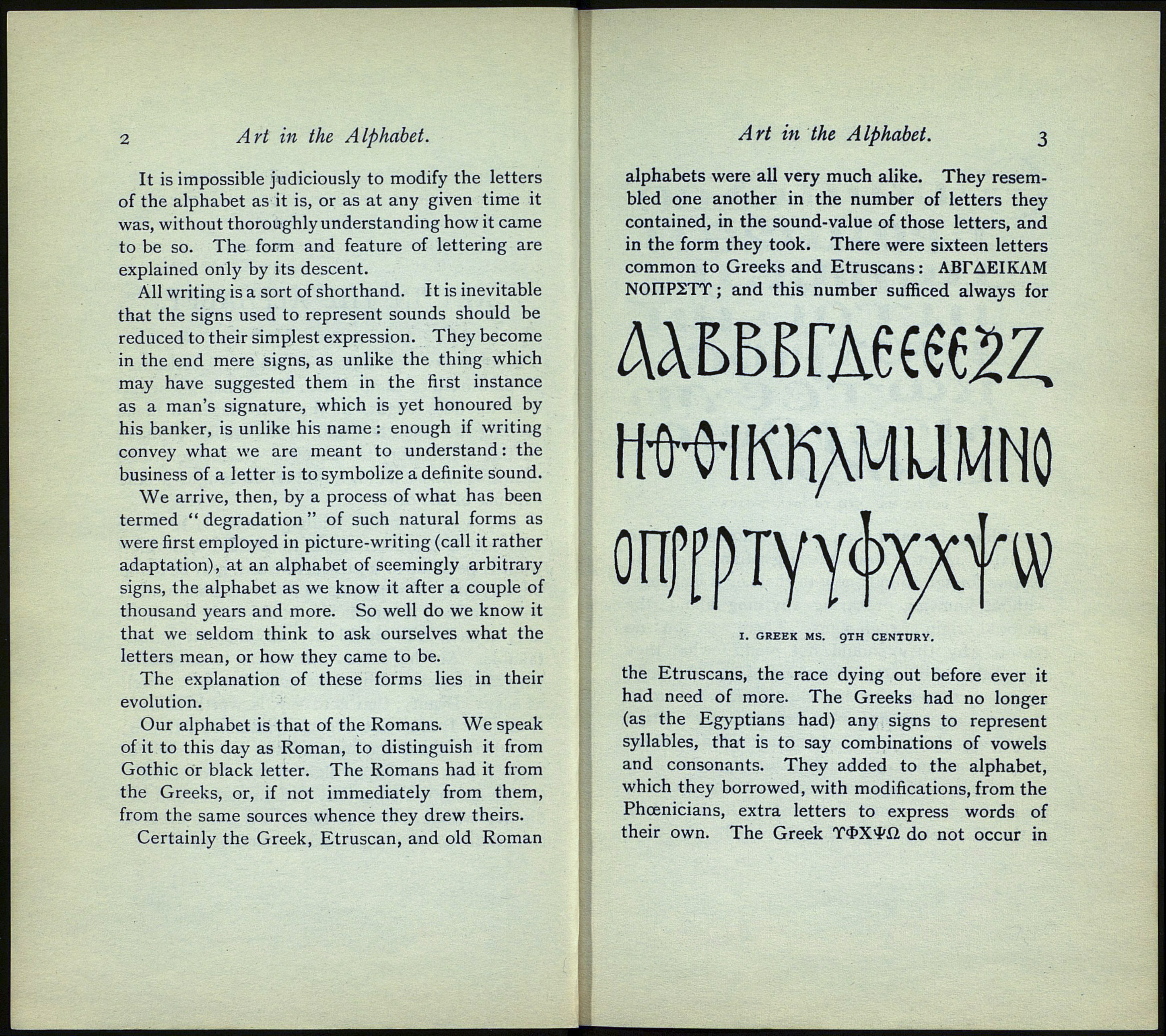 2 Art in the Alphabet.

It is impossible judiciously to modify the letters
of the alphabet as it is, or as at any given time it
was, without thoroughly understanding how it came
to be so. The form and feature of lettering are
explained only by its descent.

All writing is a sort of shorthand. It is inevitable
that the signs used to represent sounds should be
reduced to their simplest expression. They become
in the end mere signs, as unlike the thing which
may have suggested them in the first instance
as a man's signature, which is yet honoured by
his banker, is unlike his name : enough if writing
convey what we are meant to understand : the
business of a letter is to symbolize a definite sound.

We arrive, then, by a process of what has been
termed " degradation " of such natural forms as
were first employed in picture-writing (call it rather
adaptation), at an alphabet of seemingly arbitrary
signs, the alphabet as we know it after a couple of
thousand years and more. So well do we know it
that we seldom think to ask ourselves what the
letters mean, or how they came to be.

The explanation of these forms lies in their
evolution.

Our alphabet is that of the Romans. We speak
of it to this day as Roman, to distinguish it from
Gothic or black letter. The Romans had it from
the Greeks, or, if not immediately from them,
from the same sources whence they drew theirs.

Art in the Alphabet. 3

alphabets were all very much alike. They resem¬
bled one another in the number of letters they
contained, in the sound-value of those letters, and
in the form they took. There were sixteen letters
common to Greeks and Etruscans : АВГДЕІКЛМ
NOnPSTT; and this number sufficed always for

the Etruscans, the race dying out before ever it
had need of more. The Greeks had no longer
(as the Egyptians had) any signs to represent
syllables, that is to say combinations of vowels
and consonants. They added to the alphabet,
which they borrowed, with modifications, from the
Phoenicians, extra letters to express words of
their own. The Greek ТФХФІ2 do not occur in