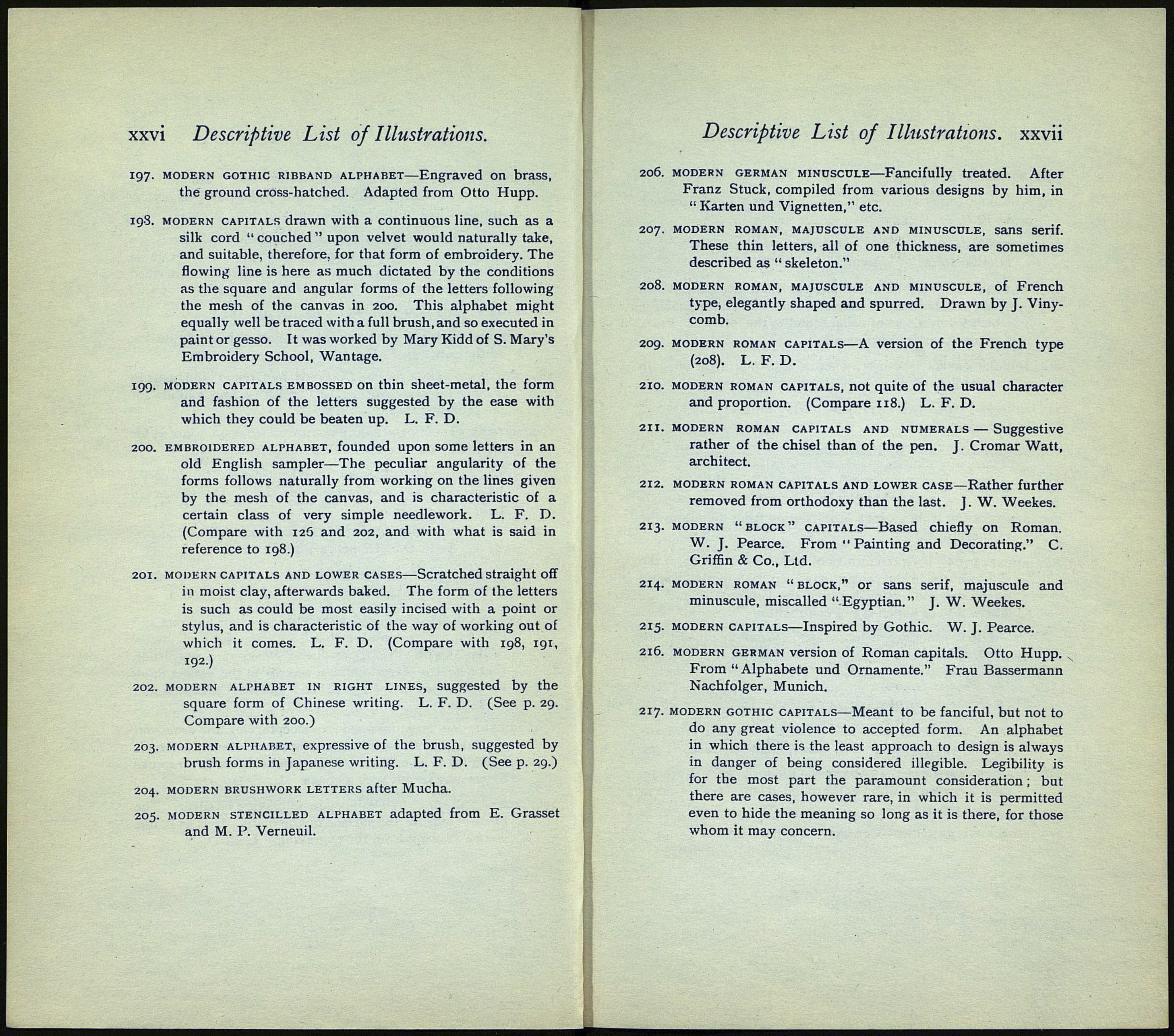 198. modern capitals drawn with a continuous line, such as a

silk cord " couched " upon velvet would naturally take,
and suitable, therefore, for that form of embroidery. The
flowing line is here as much dictated by the conditions
as the square and angular forms of the letters following
the mesh of the canvas in 200. This alphabet might
equally well be traced with a full brush, and so executed in
paint or gesso. It was worked by Mary Kidd of S. Mary's
Embroidery School, Wantage.

and fashion of the letters suggested by the ease with
which they could be beaten up. L. F. D.

200. embroidered alphabet, founded upon some letters in an

old English sampler—The peculiar angularity of the
forms follows naturally from working on the lines given
by the mesh of the canvas, and is characteristic of a
certain class of very simple needlework. L. F. D.
(Compare with 126 and 202, and with what is said in
reference to 198.)

in moist clay, afterwards baked. The form of the letters
is such as could be most easily incised with a point or
stylus, and is characteristic of the way of working out of
which it comes. L. F. D. (Compare with 198, 191,
192.)

202. modern alphabet in right lines, suggested by the

203. modern alphabet, expressive of the brush, suggested by

Franz Stuck, compiled from various designs by him, in
" Karten und Vignetten," etc.

These thin letters, all of one thickness, are sometimes
described as " skeleton."

210. modern roman capitals, not quite of the usual character

rather of the chisel than of the pen. J. Cromar Watt,
architect.

removed from orthodoxy than the last. J. W. Weekes.

217. modern gothic capitals—Meant to be fanciful, but not to

do any great violence to accepted form. An alphabet
in which there is the least approach to design is always
in danger of being considered illegible. Legibility is
for the most part the paramount consideration ; but
there are cases, however rare, in which it is permitted
even to hide the meaning so long as it is there, for those
whom it may concern.