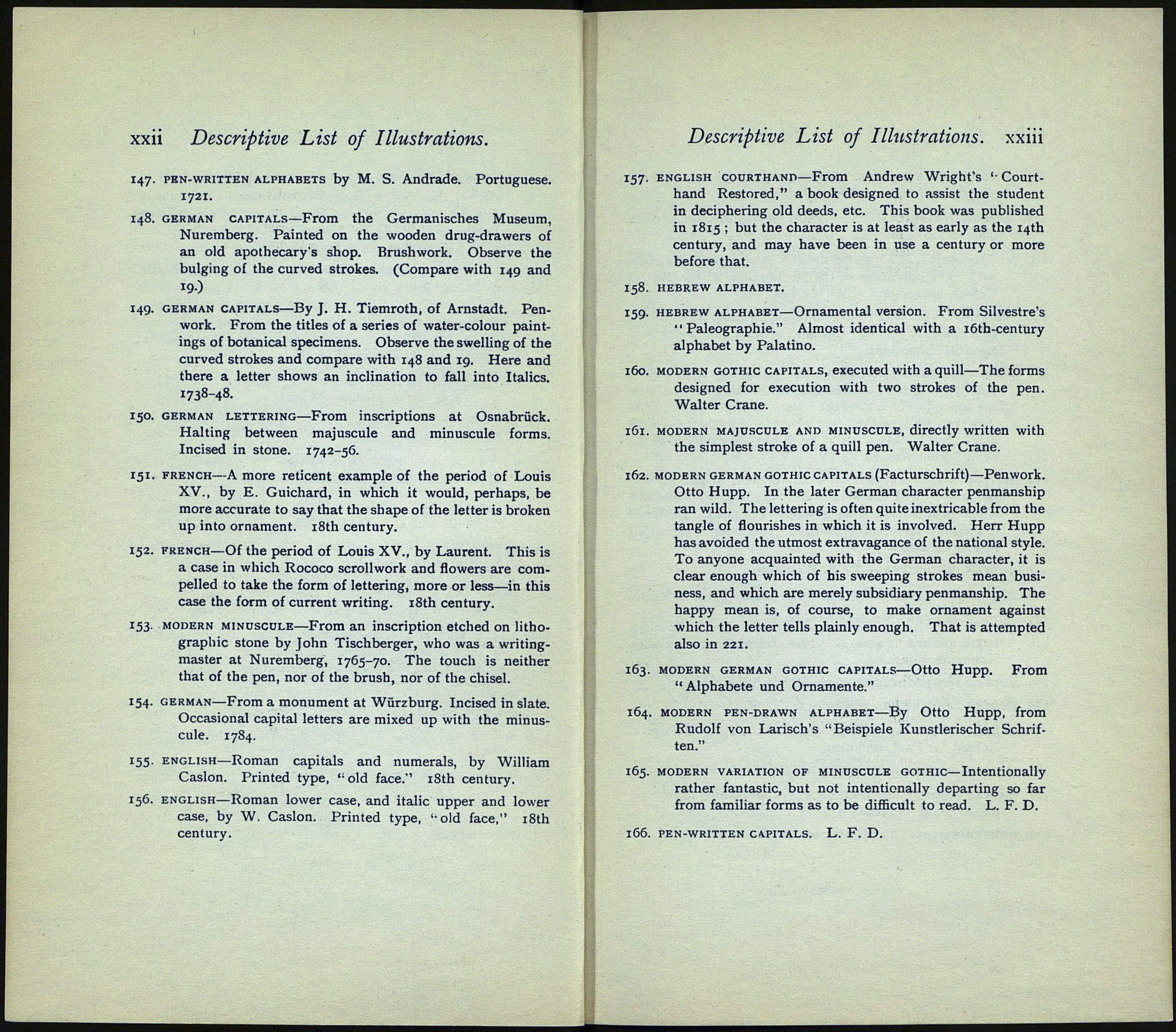 Nuremberg. Painted on the wooden drug-drawers of
an old apothecary's shop. Brushwork. Observe the
bulging of the curved strokes. (Compare with 149 and
19.)

work. From the titles of a series of water-colour paint¬
ings of botanical specimens. Observe the swelling of the
curved strokes and compare with 148 and 19. Here and
there a letter shows an inclination to fall into Italics.
1738-48.

Halting between majuscule and minuscule forms.
Incised in stone. 1742-56.

151. French—A more reticent example of the period of Louis

XV., by E. Guichard, in which it would, perhaps, be
more accurate to say that the shape of the letter is broken
up into ornament. 18th century.

a case in which Rococo scrollwork and flowers are com¬
pelled to take the form of lettering, more or less—in this
case the form of current writing. 18th century.

graphic stone by John Tischberger, who was a writing-
master at Nuremberg, 1765-70. The touch is neither
that of the pen, nor of the brush, nor of the chisel.

154. German—From a monument at Würzburg. Incised in slate.

Occasional capital letters are mixed up with the minus¬
cule. 1784.

155. English—Roman capitals and numerals, by William

hand Restored," a book designed to assist the student
in deciphering old deeds, etc. This book was published
in 1815 ; but the character is at least as early as the 14th
century, and may have been in use a century or more
before that.

"Paléographie." Almost identical with a 16th-century
alphabet by Palatino.

designed for execution with two strokes of the pen.
Walter Crane.

the simplest stroke of a quill pen. Walter Crane.

Otto Hupp. In the later German character penmanship
ran wild. The lettering is often quite inextricable from the
tangle of flourishes in which it is involved. Herr Hupp
has avoided the utmost extravagance of the national style.
To anyone acquainted with the German character, it is
clear enough which of his sweeping strokes mean busi¬
ness, and which are merely subsidiary penmanship. The
happy mean is, of course, to make ornament against
which the letter tells plainly enough. That is attempted
also in 221.

rather fantastic, but not intentionally departing so far
from familiar forms as to be difficult to read. L. F. D.