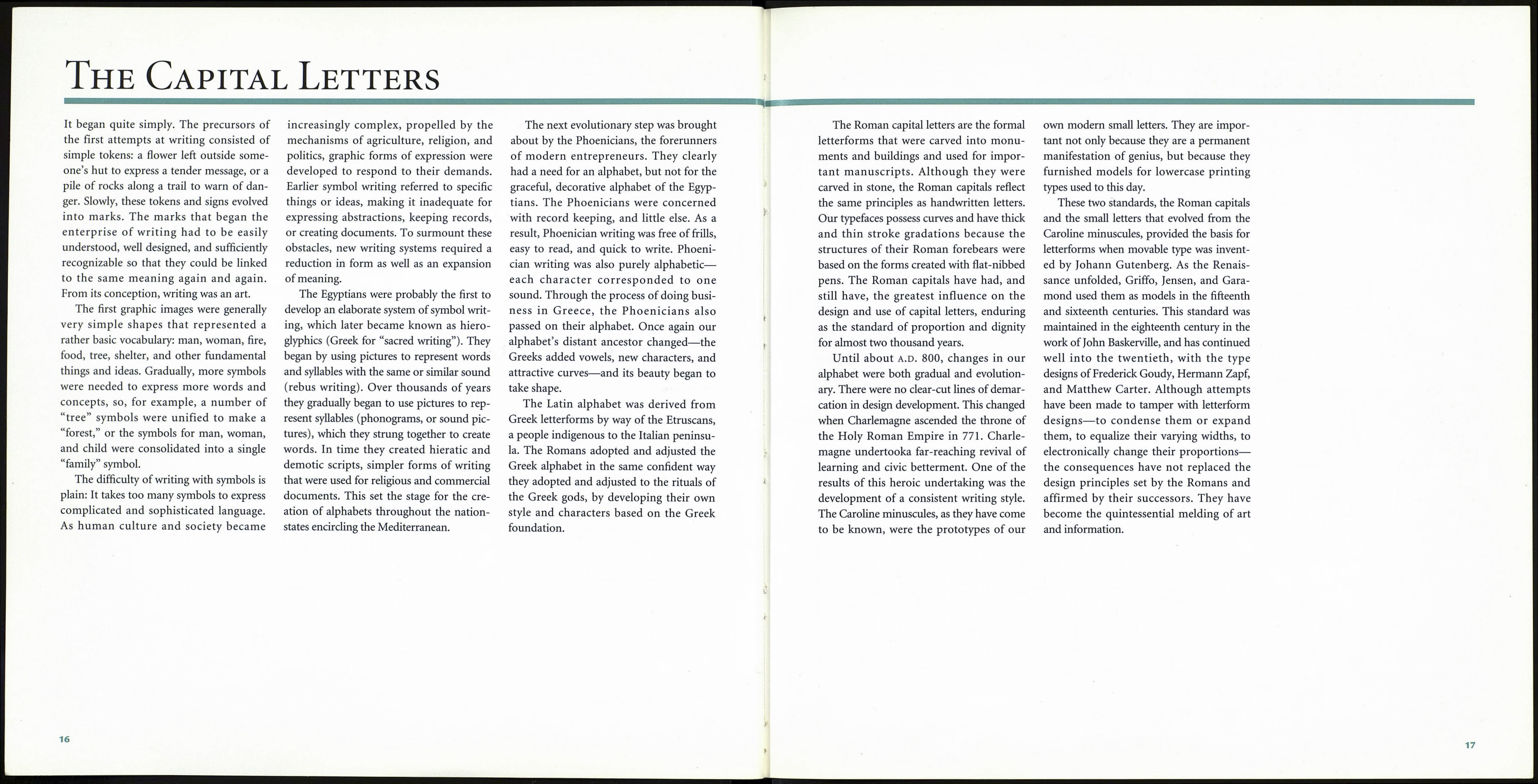 Arm: A horizontal stroke that is free on
one or both ends.

Ascenders: The parts of the letters b, d, f, h,
к, I, and t that extend above the height of
the lowercase x.

Baseline: The imaginary line on which
characters rest, descenders fall below the
baseline.

Bold or boldface: A heavier rendition of the
standard or roman version of a typeface.
Bowl: A curved stroke that encloses a
counter, except the lower portion of the
two-storied lowercase g, which is a loop.
Calligraphy: A writing style based on the
strokes created with a flat-nibbed pen or a
flat brush.

Cap line: An imaginary line that runs along
the top of a line of capital letters.
Characters: Individual letters, numerals,
punctuation marks, and other elements of
a typeface.

Condensed: Classification of a typestyle in
which the letters are narrower than normal.
Counter: Fully or partially enclosed space
within a letter.

Cross bar or cross stroke: The horizontal
stroke of the e, f, t, A, H, and T.

Descenders: The parts of the letters g, j, p,
q, and у that extend below the baseline.

Display type: Type that, by means of its
size or weight, is used to attract attention;
usually 14 points or larger.

Ear: The small stroke projecting from the
right side of the upper bowl of the lower¬
case g.

Em space: The square of a given point size
of type, which varies in size and width,
depending on the typeface’s proportions.

En space: Half the width of an em space.
Expanded: Classification of a typestyle in
which the letters are wider than normal.
Hairline: The thin stroke in a serif type¬
face design.

Headline: Usually the most prominent ele¬
ment of type in a piece of printing; that
which attracts the reader to read further or
summarizes at a glance the content of the
copy it accompanies.

Italic: Type in which the letters are
obliqued. Cursive typestyles are usually
italic, but not all italics are cursive.

Leg: The bottom diagonal on the uppercase
and lowercase k.

Ligature: Two or more characters linked
together as a single glyph.

Link: A stroke connecting the upper bowl
and lower loop of the lowercase g.

Light or lightface: A lighter rendition of a
standard or roman version of a typeface.
Lining figures: Numerals that are the same
height as the capitals in any given typeface
and align on the baseline. Also called
uppercase figures.

Loop: The lower portion of the lowercase g.
Lowercase: Small letters or minuscules.
Coined during the days of hot metal com¬
position, this term refers to the cases that
were used to hold the individual pieces of
type, which were arranged in two sections,
one higher than the other. The capitals
were kept in the upper part of the case and
the small letters were kept in the lower part
of the case.

Roman: Name generally applied to the
Latin alphabet as it is used in English and
European languages. Also used to identify
upright, as opposed to italic or cursive,
alphabet designs.

Script: Type designed to suggest writing
with a brush or pen.

Serif: A short, terminating stroke that is
usually perpendicular to the main stroke of
a character.

Shoulder: The curved stroke emerging
from a stem.

Small caps: Capital letters whose height is
approximately the x-height of the typeface.
Normally available in text designs only.
Spine: The main curved stroke of the capi¬
tal and lowercase S.

Spur: A small projection from a stroke.
Stem: A prominent vertical or diagonal
stroke.

Stress: The direction of thickening in a
curved stroke.

Tail: The part of the Q that differentiates it
from the O, or the diagonal stroke of the R
that distinguishes it from a P.

Terminal: The end of a stroke not termi¬
nating in a serif.

Text: The body copy in a book or on a
page, as opposed to the headline.

Typeface: One of the variations of styles in
a type family, such as roman, italic, bold,
ultra, condensed, expanded, outline, con¬
tour, and so on.

Type family: A range of typeface designs
that are all variations on one basic style of
alphabet. The usual components of a type
family are roman and italic, combined
with variations of weight (light to extra
bold). Type families can also include varia¬
tions in the width of the letterforms (con¬
densed or expanded).

Uppercase: Capitals; see lowercase.
Uppercase figures: See lining figures.
x-height: The height of a typeface’s lower¬
case characters, excluding ascenders and
descenders. So named because it is based
on the height of the lowercase x.