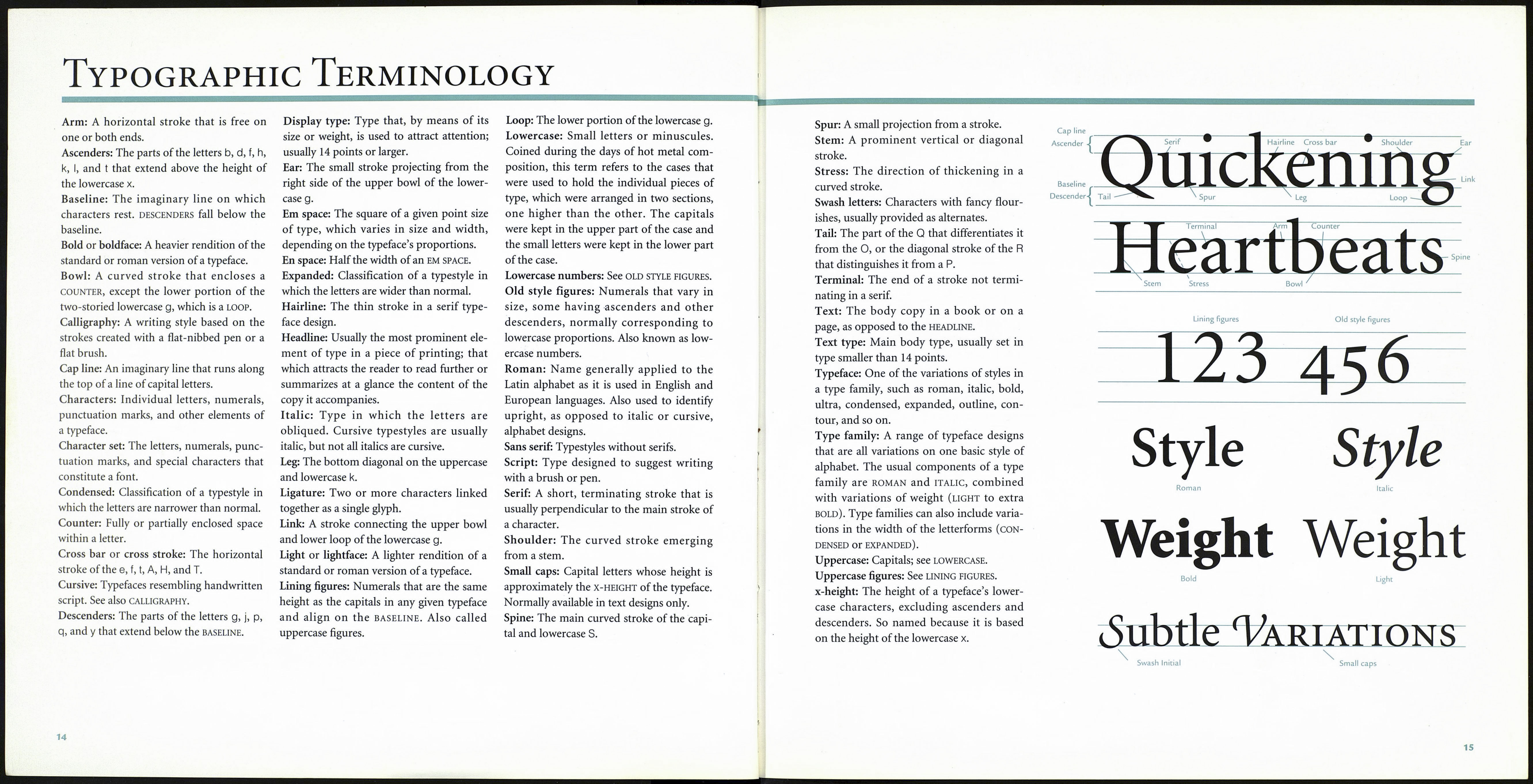 dally attractive or sophisticated, but they
get the job done.

As their name implies, these were the first
Clarendon type styles to be released. Their
stroke weight contrast is the least pro¬
nounced of all the Clarendons, and their
serifs tend to be short to medium in
length. Many of these designs were initially
released as display types, and relatively few
made the transition from foundry to
machine-set type. Bookman, Cheltenham,
and Cushing Antique are typical nine¬
teenth-century Clarendon typefaces.

These typefaces are more sophisticated
twentieth-century renditions of the first
Clarendon designs, the next evolutionary
step from display to text. Contrast in char¬
acter stroke weight is more obvious, and
the serifs tend to be longer. Some of these
typefaces share design traits with other cat¬
egories as well. A few characteristic neo-
Clarendons are ITC Century, Century
Schoolbook, ITC Cheltenham, ITC Korin-
na, and Melior.

CLARENDON/LEGIBILITY
First released in the 1920s, these type
designs are the final link in the Clarendon
evolutionary chain. Contrast of stroke
weights is minimal, serifs are generally on
the short side, and x-heights are usually

large. These typefaces were specifically
designed to be highly legible and easy to
read in a variety of typographic environ¬
ments. Though generally not noted for
their dazzling design, they are the hardest
working of the Clarendons. Clarion, Coro¬
na, Excelsior, Ionic No. 5, Nimrod, and
Olympian are just a few examples.

Slab serif typefaces have very heavy serifs
with no, or exceptionally slight, bracketing,
and variations in stroke weight are virtual¬
ly imperceptible. To many type designers
and aficionados alike, slab serif typefaces
are essentially sans serif designs with the
simple addition of heavy (stroke-weight)
serifs. Slab serif designs are exceptionally
durable and tend to evoke a sense of sim¬
plicity and sincerity when set as text, and
also serve as very versatile display designs.
Some typical slab serif designs are Aachen,
Egyptienne, ITC Lubalin Graph, Memphis,
Rockwell, Serifa, and Stymie.

Typefaces in this category tend to reflect
the influences of lapidary inscriptions
rather than those of pen-drawn forms.
Contrast in stroke weight is usually mini¬
mal, and the axis of curved strokes tends to
be vertical. The distinguishing feature of

these typefaces is the triangle-shaped serif,
which in some glyphic faces is modified to
a flaring of the character strokes where they
terminate. In some type classification sys¬
tems this category is divided into two
groups: glyphic and Latin (the ones with
precise, triangle-shaped serifs). Among the
many glyphic designs are Albertus, Friz
Quadrata, ITC Novarese, Poppl-Laudatio,
Romic, ITC Serif Gothic, and ITC Veljovic.

Simply put, these typefaces have no serifs.
(The French word sans means “without.”)
Although stonecut versions of this style
predate the development of movable type,
a sans serif design was first cast into type in
1816 by William Caslon IV (a descendant
of William Caslon, who designed the
important serif typeface that bears his
name). Aside from their lack of serifs, the
most distinctive quality of sans serif type¬
faces is their tendency toward an optically
monotone stroke weight, a trait that some
typophiles feel hinders their effectiveness
in text composition, even more so than
their lack of serifs. Because they were gen¬
erally viewed as ugly, early sans serif types
were called “grotesques,” a designation
that is still used in England.

These are the first commercially popular
sans serif typefaces. In sans serif grotesque
styles, contrast in stroke weight is notably
apparent, there is a slightly “squared” qual¬
ity to many of the curves, and several

designs have the “bowl and loop” lower¬
case g common to roman types. In some
cases the R has a curled leg, and the G usu¬
ally has a spur. These are the “personality”
types of the sans serif category—some even
have a kind of homespun quality. Alternate
Gothic, Franklin Gothic, News Gothic, and
Trade Gothic are just a few examples.

These sans serif designs are patterned after
the first grotesques, but are more refined
in form. Stroke contrast is less pronounced
than in earlier designs, and much of the
“squareness” in curved strokes is also
absent. Neo-grotesques can easily be con¬
fused with their earlier counterparts. Usu¬
ally the distinguishing characteristics of
these faces are their single-bowl g, accen¬
tuated monotone weight stress, and lack of
personality. The neo-grotesque category of
typefaces includes Akzidenz Grotesk,
Folio, ITC Franklin Gothic, Haas Unica,
Helvetica, Imago, Univers, and Video.

Simple geometric shapes heavily influence
the construction of these typefaces. Their
strokes have the appearance of being strict
monolines, and character shapes are com¬
prised of seemingly perfect geometric
forms. Geometric sans serif faces tend to be
less readable than grotesques. Typical geo¬
metric designs include ITC Avant Garde

Of all the sans serif typefaces, these most
closely duplicate roman design characteris¬
tics and proportions. As they are based on
the proportions of Roman inscriptional
capitals and lowercase letters, this is clearly
intended. In many cases, contrast in stroke
weight is readily apparent, reflecting a
strong calligraphic influence. Many type
designers assert that these are the most leg¬
ible and most easily read of the sans serif
types. Clearface Gothic, Cosmos, ITC Eras,
Frutiger, Gill Sans, Optima, Praxis, Syntax,
and Vela are some typical humanistic sans
serif typefaces.

Square sans serif designs are generally based
on grotesque or neo-grotesque character
traits and proportions, but exhibit a distinct
(and at times dramatic) squaring of rou¬
tinely curved strokes. They usually have
more latitude in character spacing than
their sans serif cousins, and tend to be
exceptional display designs. Antique Olive,
Letraset Compacta, and Eurostile are just a
few examples.

Available in a wide range of shapes and
sizes, script typefaces seek to imitate cursive
writing. Some are very elegant and appear
to be carefully drawn with a quill pen,
while others express the essence of spon¬
taneity. (In the interest of expediency and
efficiency, I have grouped all scripts under
one category; to do justice to them over a
dozen subcategories would have to be cov¬
ered.) Typical of the category only in the
diversity of their design, Coronet, Legend,
Medici Script, Mistral, Poppl-Exquisit,
Snell Roundhand, and ITC Zapf Chancery
are representative scripts.

The second catchall category in this classi¬
fication system, graphic typefaces defy sim¬
ple pigeonholing. They might look like
they were cut in stencil, created on a com¬
puter terminal, or decorated with flowers.
Their only shared trait is that they are
plainly constructed rather than based on
written forms. Some of these typefaces are
excellent communicators, others are not.
In fact, some pretty thin excuses for type
design fall into this category, none of
which are represented in this book. ITC
Benguiat Gothic, Britannic, ITC Isbell, Lo
Type, Parisian, and Revue are some of the
more subdued examples of this group.