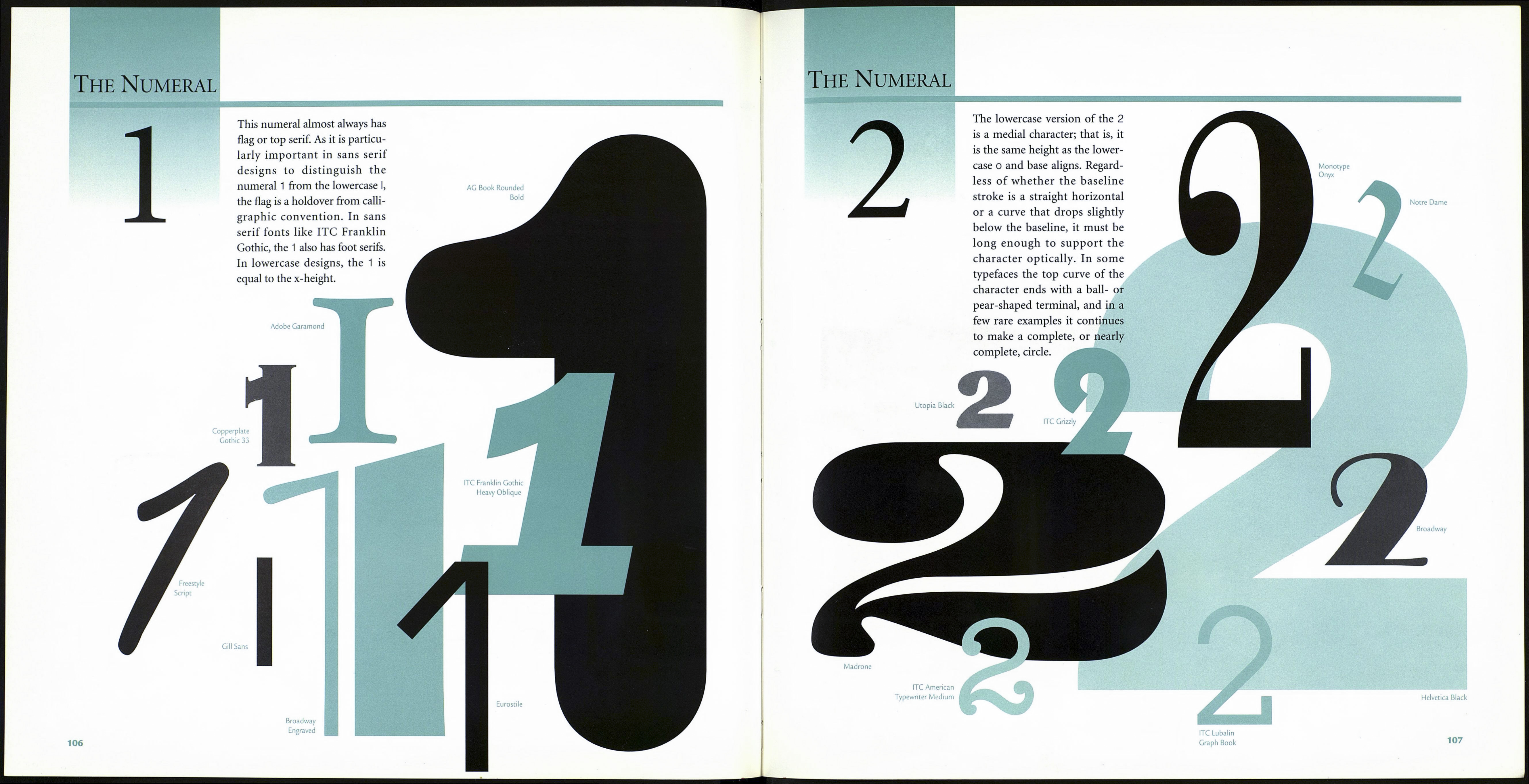 While our letterforms evolved from the
Roman monumental letters, our numerals
are Arabic in origin. The numerals that the
Romans used were derived from their cap¬
ital letterforms, and although they worked
well within monumental inscriptions, large
numbers expressed in Roman numerals
are long strings of characters that are at
best difficult to read, and at worst virtually
impossible to use effectively in any mathe¬
matical computations.

When the lowercase alphabet became
the standard for handwritten documents
around A.D. 800, number values were still
expressed in Roman numerals. The good
news was that they were compatible with
the lowercase letterforms, but they were
still about as useful as mittens in August.

Classical Greece and Rome were re¬
nowned for their scholarship in history
and literature, yet the centers for mathe¬
matical study were located in Asia and the
Middle East. Early cultures searched for a
numerical system that would work in a
variety of situations, but the solution was
hampered for centuries by the absence of a
concept of zero. It wasn’t until the sixth
century a.D. that zero as a numerical value
was developed in India.

Through their trade with India, the
Arabs also adopted the concept of zero and

became sophisticated mathematicians in
their own right. For the most part, the
numerals they used looked very much like
the ones we use today, but it took many
years for the Western world to incorporate
these characters into printing and writing.
As late as the twelfth century a.D., Euro¬
pean numerals, except for the 1, the 8, and
the 9, were different from the forms we use
today. Commercial activity eventually
resulted in the conversion from Roman to
Arabic numerals, as merchants found the
former too difficult to work with and
prone to computational errors. As interna¬
tional trade expanded, so did the use of
Arabic numerals.

When Gutenberg invented the art of
typography, he designed a set of numbers to
complement his original font. In spite of
this precedent, for almost one hundred
years afterward numbers were treated large¬
ly as pi characters that did not correspond
to any particular typeface design. Claude
Garamond, the celebrated sixteenth-century
French type designer, is generally credited
with creating the first typeface whose
numerals were specifically designed to
reflect the subtleties of its letterforms.
Except for a few stylistic variations, Gara-
mond’s figures set the standard for numer¬
als design for the next two hundred years.

Garamond intended his numerals to be
set as part of text copy and designed them
to have the same proportions as lowercase
letters. Because of this, they do not align
with the baseline and the cap line or
ascender line of a given typeface, as do the
numerals in most of the fonts that are
available today. Corresponding to lower¬
case dimensions, Garamond’s numerals
are based on three forms: ascending (6 and
8), medial (l, 2, and o), and descending (3,
4, 5, 7, and 9). To prevent readers from
confusing the lowercase 0 with the lower¬
case o, the former was given a different
weight stress.

In response to the documentation re¬
quired by the many scientific advance¬
ments that were made during the Age of
Enlightenment, in the late eighteenth cen¬
tury a new type of numeral, referred to as
“lining” or “ranging,” was introduced for
mathematical and technical typesetting.
The idea was that the larger figures would
provide a more legible alternative to
Garamond’s design. Just as Garamond’s
numerals reflect the design and propor¬
tions of lowercase letters, lining figures
correspond—visually if not actually—to
the capitals’ height, stroke weight, and pro¬
portions, although in some scripts and
decorative faces they are often much shorter

than the capitals. When lining figures are
designed to a common width so that
columns of numerals will align, they are
called “tabular” or “monospaced.” This
type of numeral also establishes the en space
of a font. Lowercase or lining numerals
whose design incorporates spacing that is
sensitive to the proportions of the individ¬
ual figures are called “proportional” or “fit¬
ted,” and will not align when set in columns.

At first glance ranging numbers may
appear to be more legible than their lower¬
case counterparts, but a variety of legibility
studies have proven the opposite to be cor¬
rect: Lowercase numbers are moderately
more legible than ranging numbers when
isolated, and considerably more legible
when set in groups. In addition to being
more legible, many designers and typogra¬
phers also believe that lowercase numbers
are more beautiful and elegant than the
ranging variety.

For over one hundred years, printers
and typographers benefited from both sets
of numbers, enabling them to use the
appropriate set in any given application,
but when typesetting was mechanized in
the late nineteenth century, typographic
variety was sacrificed for mechanical effi¬
ciency. Machine-set type had limited char¬
acter sets that allowed for only one set of

numbers. Some fonts (those text designs
generally confined to what printers called
“book work,” which were books and pam¬
phlets that required lengthy blocks of text
copy) included the lowercase numerals
design, while others (more general-purpose
fonts used for “jobbing work,” which con¬
sisted of commercial typography that
required relatively little typesetting) had the
ranging design. When phototype (also
known as computer-set type) replaced
machine-set metal type, the majority of
foundries included only the ranging style in
their fonts.

Lowercase numbers are sometimes
described as “old style,” recalling the time
when lining figures were first introduced.
Nineteenth-century typographers referred
to the new type of numeral as “modern,”
relegating the already established lowercase
numerals to the classification of “old style.”
To this day typographic traditionalists use
this term to refer to the style of numbers
found in Garamond’s original font.

The Design
of the Numerals

For the type designer, designing numerals
can be a delicate balancing act. Because
each numeral’s base is either a round bowl

or a thin single stroke, numerals do not
have the natural baseline foundation from
which most of the capital and lowercase
letters benefit. Even in devising the rela¬
tively stable 2, the designer must maintain
a delicate equilibrium between its full-bod¬
ied top bowl and baseline horizontal.
While lowercase numbers reflect both the
stroke weight and proportions of the low¬
ercase letters, the stroke weight of the lin¬
ing figures is usually slightly lighter than
that of the capital letters.

In order to create the most beautiful
and efficient characters, it is essential that
designers bear in mind that the lineage of
the numerals, like the lowercase letters,
can be traced directly to calligraphic
forms. While some liberties can be taken
in the rendering of letters, numerals do
not provide an opportunity for designers
to exercise their creativity in the use of
shape and proportion. Because individual
letters are read within the context of their
adjacent characters and words, which
would compensate for a certain degree of
design ambiguity, there is a little more lat¬
itude in the rules a designer must follow.
Numbers, on the other hand, are almost
always read singly, so that without the
benefits of contextual relationships, each
must stand on its own merits of legibility.