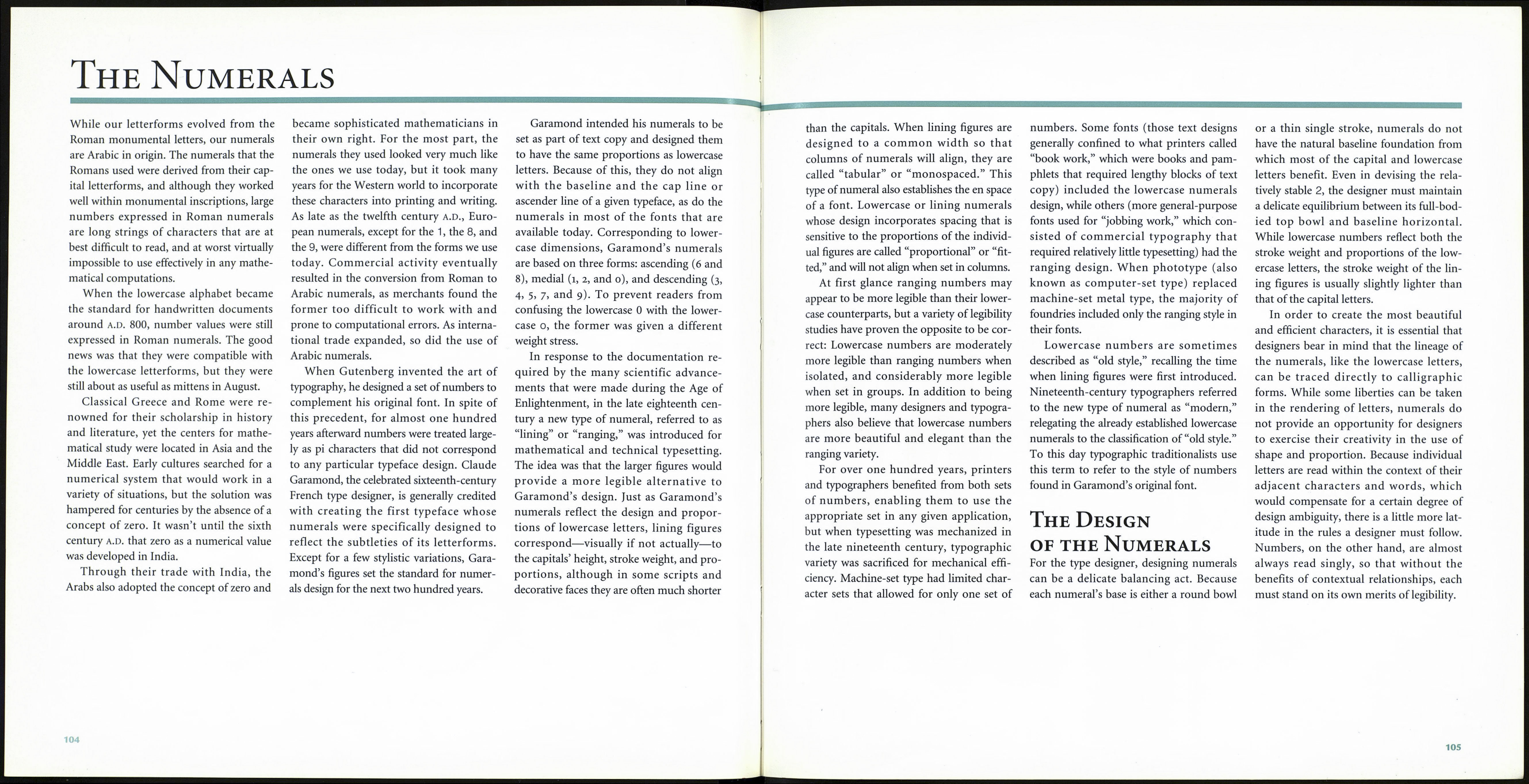 A relatively technical craft, typeface design
is primarily concerned with producing a
series of interchangeable tools that always
work in harmony regardless of how they
are combined. For the most part, this puts
a real damper on how creative a designer
can get when it comes to rendering indi¬
vidual letterforms. There are, of course,
some exceptions to this rule, and the am¬
persand is a shining example.

Derived from the Latin et (which means
“and”), the ampersand is a ligature com¬
prised of the letters e and t. The word
“ampersand” itself is an alteration of et (&)
per se and, which was subsequently cor¬
rupted to “and per se and,” then finally
“ampersand.” The invention of the amper¬
sand is sometimes credited to Marcus Tiro,
who in 63 B.C. made it a part of his short¬
hand system of writing. Another source
sites that it wasn’t until about A.D. 45 that
the ampersand, written in the style of the
early Roman capital cursive letters, first
appeared on a piece of papyrus. Still an¬
other source points to Pompeian graffiti
dated around a.d. 79 as the first use of the
ampersand. Clearly, the exact birthdate of
the ampersand will never be established.

As did many of the characters in our
current alphabet, the ampersand probably
began as a connivence. The Latin et was
first written by scribes as two distinct let¬
ters, but over time the letters were com¬
bined into a monogram of sorts. Once
accepted as a single character, artistry took
over and a more flowing design resulted.

By the time Charlemagne’s scribes
developed the Caroline minuscule in about
a.d. 775, the et ligature had become a stan¬
dard part of their repertoire. The amper¬
sand was then adopted with the invention
of printing in the mid-fifteenth century,
after which it became a commonly used
character for about a hundred years. For
example, a single page from Francesco
Colonna’s Hypnerotomachia Poliphili,
printed by Aldus Manutius in 1499, has
twenty-five ampersands. The reason for a
more liberal use of the ampersand in early
printing is two-fold: First, early printers
wanted their work to reflect the traditions
of hand-illuminated manuscripts (a com¬
mon technological phenomenon—the first
automobiles looked like horse-drawn car¬
riages, and the first television shows weren’t
much more than radio programs with pic¬
tures); second, because then, as now, the
ampersand was considered a particularly
beautiful character that printers appreciat¬
ed for its own aesthetic merit.

Unfortunately, the ampersand doesn’t
see much use anymore. It is usually con¬
fined to headlines and business stationery,
where it dutifully yokes company names.
Not everyone, however, agrees with this
convention. In his “An Essay on Typogra¬
phy,” Eric Gill wrote that “it would be a
good thing typographically if, without any
reliance upon medieval or incunabuli
precedent, modern printers allowed a mor
frequent use of contractions. The absu:
rule that the ampersand (&) should only be

used in business titles must be rescinded, &
there are many other contractions which a
sane typography should encourage.”

Today the ampersand is a part of every
new typeface design and is often exception¬
ally beautiful. Consider for example the
ampersand in ITC American Typewriter.
One would expect a fairly pedestrian, ho-
hum ampersand in this face. Wrong. Not
only does this font include a handsome
design for the et ligature, it offers an alter¬
nate as well. Other great ampersands can be
found in ITC Bookman, Adobe Garamond,
Trump Mediaeval, and New Caledonia Ital¬
ic (especially in the black weight). Some
typefaces provide several ampersand choic¬
es: Goudy drew two for his Franciscan, ITC
Bookman has three, and Cancelleresca Bas¬
tarda gives you a whole handful. If you real¬
ly want a vast selection, try Adobe’s Poetica
by Robert Slimbach, which includes over
fifty-eight ampersand designs!