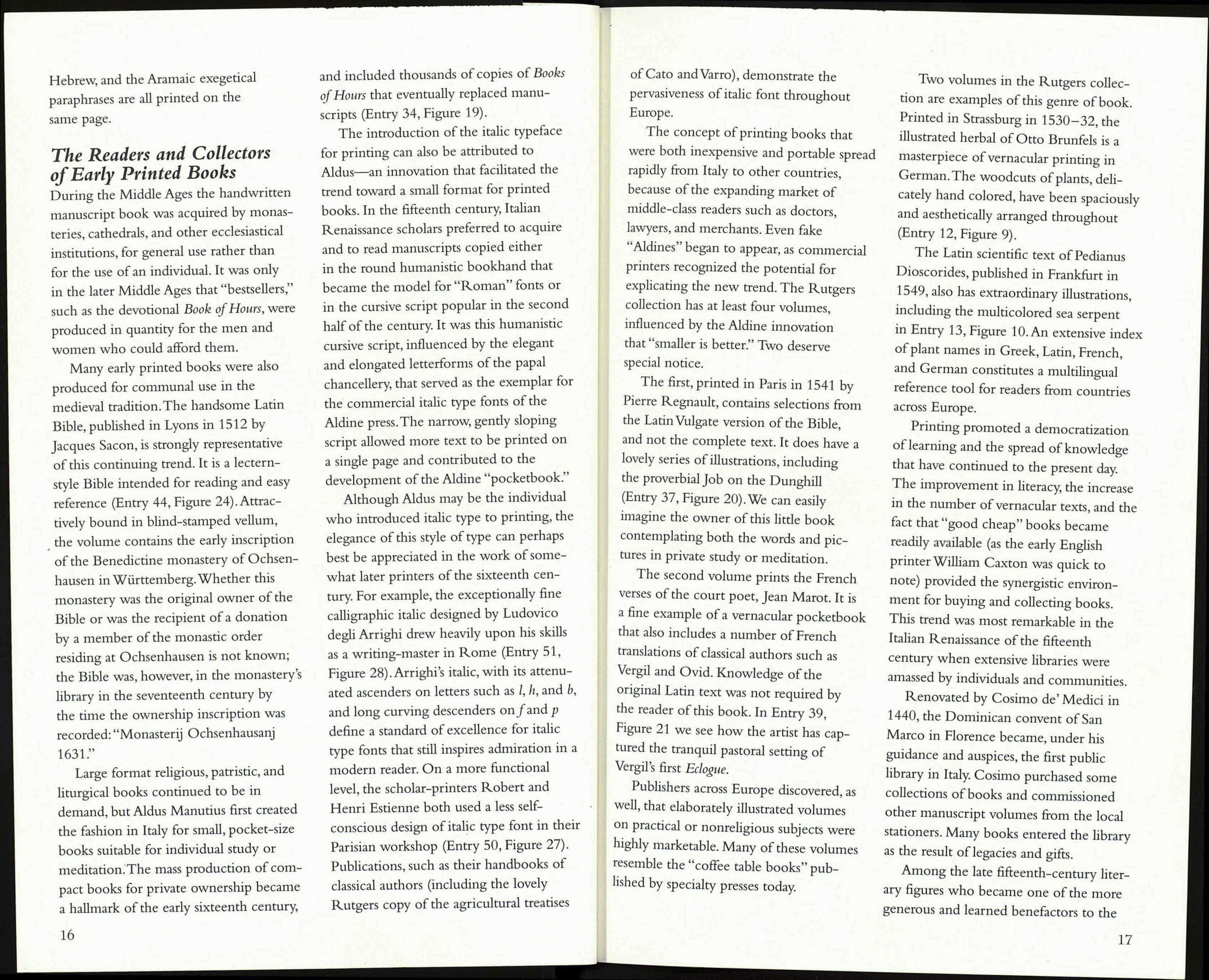 of straight connecting lines and leafy
branches that extend horizontally from
one opening to the next. The format of
this genre of world chronicle was cleverly
adapted from a scroll to accommodate the
new technology of the printed book.

The introduction of printing made it
possible to mass produce texts for many
different communities of readers. Books
containing vernacular literature, vernacular
translations of Latin and Greek authors,
and multilingual texts were printed in
record numbers. Students, scholars, the¬
ologians, aristocrats, merchants, and edu¬
cated men and women were all eager for
reading material in their national lan¬
guages, as well as in Latin, the traditional
language of the Church and the law.

In Italy, when publishers began to assess
the market for books, Dante, Petrarch, and
Boccaccio were among the first authors
whose Italian works were printed. The
Rutgers copy of the Divine Comedy of
Dante, produced in Venice in 1497, is a
deluxe edition with detailed woodcuts.
Anecdotes from the period, in addition
to the large number of manuscripts and
printed books still extant, demonstrate
that everyone in Italy was interested in
Dante. Boccaccio lectured about Dante to
public audiences in Florence. Members of
the middle class were hungrily acquiring
books containing Dante's poetry. And even
those who could not read were memoriz¬
ing and reciting his poetry: the short story
writer Franco Sacchetti (novella 114) tells
how Dante was walking down the street
in Florence past a blacksmith's shop when
he heard his Divine Comedy being sung
most wretchedly by an artisan in the shop!

The Rutgers copy of Dante, with its
series of illustrations, was intended for the

upper-end of the book-buying market;
it was designed for educational purposes,
most likely for individuals who were
literate, but did not know Latin. The
Italian text of Dante, in a somewhat larger
type font, is surrounded by the detailed
commentary of Cristoforo Landino, also
in Italian. Key words and phrases in the
margins direct the reader's attention to
important points in the commentary, such
as references to Plato or Vergil. Each canto
has a woodcut that is instructive and
intended to help the reader better com¬
prehend the text. For example, Dante is
identified by the letter "D" and Vergil by
"V" (Entry 18, Figure 5).The illustrations
are a didactic, as well as an aesthetic,
device for the nonscholarly audience.

In addition to texts originally com¬
posed in the national languages, there was
an equally strong audience for vernacular
translations of classical authors. Since
many people did not know enough Latin
to read the elegant language of such
ancient authors as Caesar, Cicero, or Pliny,
many Latin and Greek authors were trans¬
lated into vernacular languages.

The crisp copy of Josephus preserved
at Rutgers that was printed in Strassburg
in 1535 illustrates this point (Entry 5,
Figure 2). It is a fine example of a classical
author whose original work was com¬
posed in Greek, then translated into Latin
(see also Entry 27), and here into German.
Josephus's writings on Jewish history were
extremely popular texts throughout the
Middle Ages and Renaissance, so it is not
surprising that they were translated,
copied, and printed many times.

This volume also demonstrates how,
just as different scripts were associated
with different texts in medieval manu¬
scripts, different type fonts were developed
and used for the printed version of

different books. Whether published in
English, French, or German, a distinctive
type font distinguished the vernacular
texts from the Latin. In Germany many
varieties of this handsome style of type
font and decorative initials began to
evolve in the fifteenth century and have
persisted into the twentieth century, so
strongly have they become identified
with the language, literature, and culture
of the country.

Greek Language and Literature
After the Turks captured Constantinople
in 1453, many Greek scholars fled to Italy.
They brought with them their knowledge
of Greek literature and hundreds of manu¬
script texts by classical and medieval
Greek authors.The intellectual zeal of
the Italian humanists for Greek literature
created both a strong market for printed
books and typographical challenges for
the printers.

In the earliest years of printing, when¬
ever Greek words or phrases appeared in a
Latin text, the compositor left a space and
a scribe entered the Greek text by hand.
Throughout the Rutgers copy of the
Suetonius text printed by Jenson in 1471,
Greek quotations were carefully inserted
by a scribe in pale red ink. Soon, however,
Greek type fonts, with seemingly innu¬
merable complexities of abbreviations and
ligatures, were designed by printers, and
Greek authors could be published in
their entirety.

The editio princeps of Homer, edited
by the Greek scholar Demetrius Chal-
condyles, was printed in 1488 in Florence
by Bartolomeo Libri. This elegant publica¬
tion, here bound as two volumes, pre¬
sented the complete corpus of Homer's
works, as it was defined in the Renais¬
sance: the Iliad, the Odyssey, the Homeric

Hymns, and the mock-epic poem the
Battle of the Frogs and the Mice. This edi¬
tion, the first major classical Greek author
to be typeset, established high standards of
scholarship and printing for all subsequent
publications in Greek.

Aldus Manutius set up his press in
Venice in 1495, where he promoted and
revolutionized the publication of Greek
texts. More importantly, at the time that
Byzantium was disintegrating, Aldus and
his press assumed responsibility for pre¬
serving the heritage of Greek literature.
Aldus created a market niche by concen¬
trating on the texts of previously unpub¬
lished Greek authors (e.g., Aristotle and
Sophocles), by printing them in small,
affordable formats, and by selling them in
large numbers throughout Europe. Unlike
earlier printers, who produced approxi¬
mately 200 to 250 copies as an average
print run, Aldus usually ran 1,000 copies.
The talents of Aldus can be seen in the
typographical challenges of printing a
bilingual text, the Greek grammar book
of Fra Urbanus Bellunensis published in
January of 1497 (Entry 48, Figure 26). In
the second half of the fifteenth century
there was sufficient interest in Greek
language and literature to publish gram¬
mars for students. Aldus requested that
Urbanus, a teacher in Venice, compose this
grammar; the book was so popular that it
was reprinted more than twenty times in
the sixteenth century.

The Latin and Greek portions of the
text are in perfect spatial harmony
throughout the volume, with each type
font complementing the other. One can
understand, based on this bilingual text,
how it soon became possible in the early
sixteenth century to print the complex
polyglot Bible in which the Vulgate
Latin, the Greek Septuagint, the original