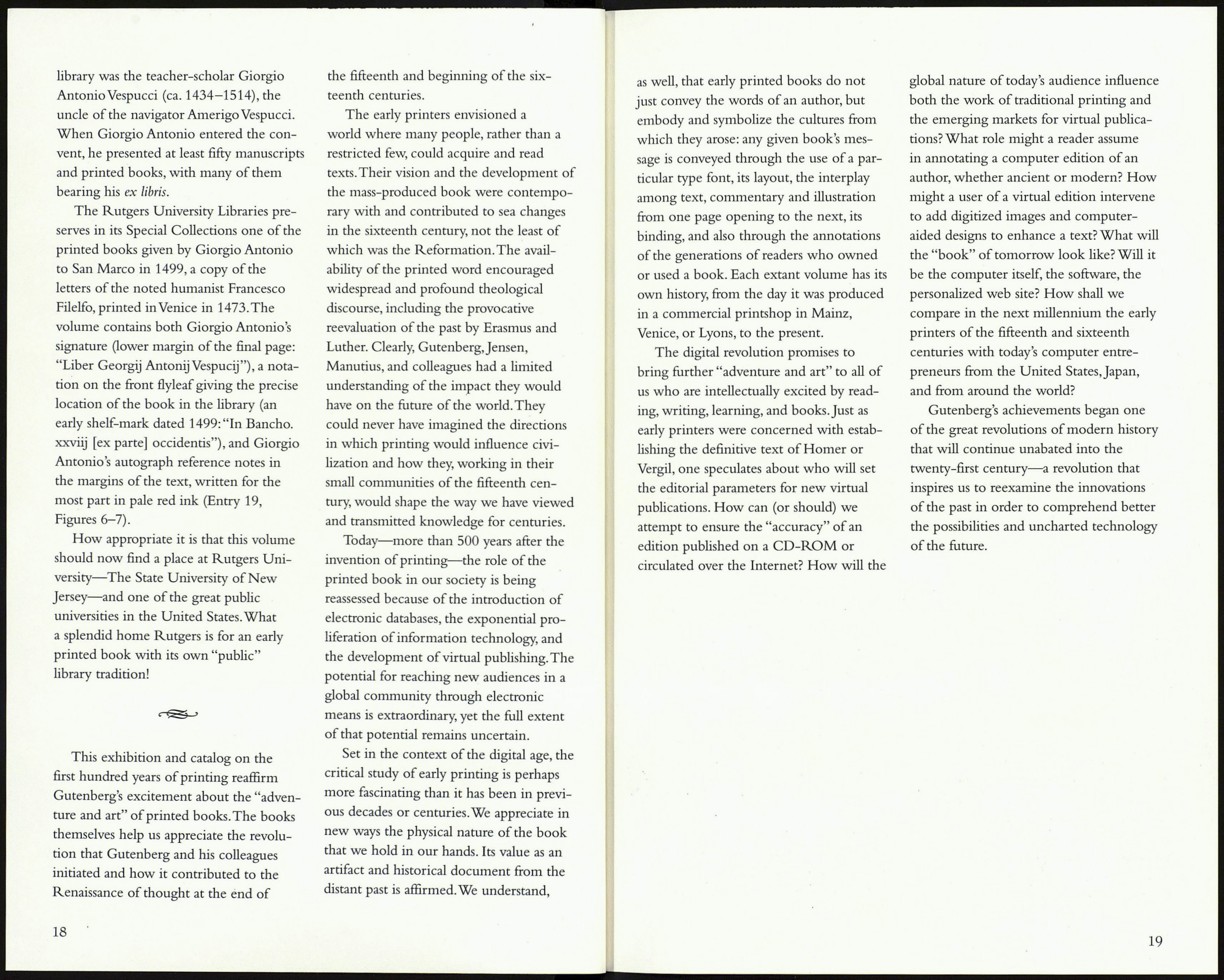 Hebrew, and the Aramaic exegetical
paraphrases are all printed on the
same page.

The Readers and Collectors
of Early Printed Books

During the Middle Ages the handwritten
manuscript book was acquired by monas¬
teries, cathedrals, and other ecclesiastical
institutions, for general use rather than
for the use of an individual. It was only
in the later Middle Ages that "bestsellers,"
such as the devotional Book of Hours, were
produced in quantity for the men and
women who could afford them.

Many early printed books were also
produced for communal use in the
medieval tradition. The handsome Latin
Bible, published in Lyons in 1512 by
Jacques Sacon, is strongly representative
of this continuing trend. It is a lectern-
style Bible intended for reading and easy
reference (Entry 44, Figure 24). Attrac¬
tively bound in blind-stamped vellum,
the volume contains the early inscription
of the Benedictine monastery of Ochsen¬
hausen in Württemberg. Whether this
monastery was the original owner of the
Bible or was the recipient of a donation
by a member of the monastic order
residing at Ochsenhausen is not known;
the Bible was, however, in the monastery's
library in the seventeenth century by
the time the ownership inscription was
recorded: "Monastery Ochsenhausanj
1631."

Large format religious, patristic, and
liturgical books continued to be in
demand, but Aldus Manutius first created
the fashion in Italy for small, pocket-size
books suitable for individual study or
meditation. The mass production of com¬
pact books for private ownership became
a hallmark of the early sixteenth century,

and included thousands of copies of Books
of Hours that eventually replaced manu¬
scripts (Entry 34, Figure 19).

The introduction of the italic typeface
for printing can also be attributed to
Aldus—an innovation that facilitated the
trend toward a small format for printed
books. In the fifteenth century, Italian
Renaissance scholars preferred to acquire
and to read manuscripts copied either
in the round humanistic bookhand that
became the model for "Roman" fonts or
in the cursive script popular in the second
half of the century. It was this humanistic
cursive script, influenced by the elegant
and elongated letterforms of the papal
chancellery, that served as the exemplar for
the commercial italic type fonts of the
Aldine press. The narrow, gently sloping
script allowed more text to be printed on
a single page and contributed to the
development of the Aldine "pocketbook."
Although Aldus may be the individual
who introduced italic type to printing, the
elegance of this style of type can perhaps
best be appreciated in the work of some¬
what later printers of the sixteenth cen¬
tury. For example, the exceptionally fine
calligraphic italic designed by Ludovico
degli Arrighi drew heavily upon his skills
as a writing-master in Rome (Entry 51,
Figure 28). Arrighi s italic, with its attenu¬
ated ascenders on letters such as /, h, and b,
and long curving descenders on/and p
define a standard of excellence for italic
type fonts that still inspires admiration in a
modern reader. On a more functional
level, the scholar-printers Robert and
Henri Estienne both used a less self-
conscious design of italic type font in their
Parisian workshop (Entry 50, Figure 27).
Publications, such as their handbooks of
classical authors (including the lovely
Rutgers copy of the agricultural treatises

of Cato and Varrò), demonstrate the
pervasiveness of italic font throughout
Europe.

The concept of printing books that
were both inexpensive and portable spread
rapidly from Italy to other countries,
because of the expanding market of
middle-class readers such as doctors,
lawyers, and merchants. Even fake
"Aldines" began to appear, as commercial
printers recognized the potential for
explicating the new trend. The Rutgers
collection has at least four volumes,
influenced by the Aldine innovation
that "smaller is better." Two deserve
special notice.

The first, printed in Paris in 1541 by
Pierre Regnault, contains selections from
the Latin Vulgate version of the Bible,
and not the complete text. It does have a
lovely series of illustrations, including
the proverbial Job on the Dunghill
(Entry 37, Figure 20). We can easily
imagine the owner of this little book
contemplating both the words and pic¬
tures in private study or meditation.

The second volume prints the French
verses of the court poet, Jean Marot. It is
a fine example of a vernacular pocketbook
that also includes a number of French
translations of classical authors such as
Vergil and Ovid. Knowledge of the
original Latin text was not required by
the reader of this book. In Entry 39,
Figure 21 we see how the artist has cap¬
tured the tranquil pastoral setting of
Vergil's first Eclogue.

Publishers across Europe discovered, as
well, that elaborately illustrated volumes
on practical or nonreligious subjects were
highly marketable. Many of these volumes
resemble the "coffee table books" pub¬
lished by specialty presses today.

Two volumes in the Rutgers collec¬
tion are examples of this genre of book.
Printed in Strassburg in 1530-32, the
illustrated herbal of Otto Brunfels is a
masterpiece of vernacular printing in
German. The woodcuts of plants, deli¬
cately hand colored, have been spaciously
and aesthetically arranged throughout
(Entry 12, Figure 9).

The Latin scientific text of Pedianus
Dioscorides, published in Frankfurt in
1549, also has extraordinary illustrations,
including the multicolored sea serpent
in Entry 13, Figure 10. An extensive index
of plant names in Greek, Latin, French,
and German constitutes a multilingual
reference tool for readers from countries
across Europe.

Printing promoted a democratization
of learning and the spread of knowledge
that have continued to the present day.
The improvement in literacy, the increase
in the number of vernacular texts, and the
fact that "good cheap" books became
readily available (as the early English
printer William Caxton was quick to
note) provided the synergistic environ¬
ment for buying and collecting books.
This trend was most remarkable in the
Italian Renaissance of the fifteenth
century when extensive libraries were
amassed by individuals and communities.

Renovated by Cosimo de' Medici in
1440, the Dominican convent of San
Marco in Florence became, under his
guidance and auspices, the first public
library in Italy. Cosimo purchased some
coflections of books and commissioned
other manuscript volumes from the local
stationers. Many books entered the library
as the result of legacies and gifts.