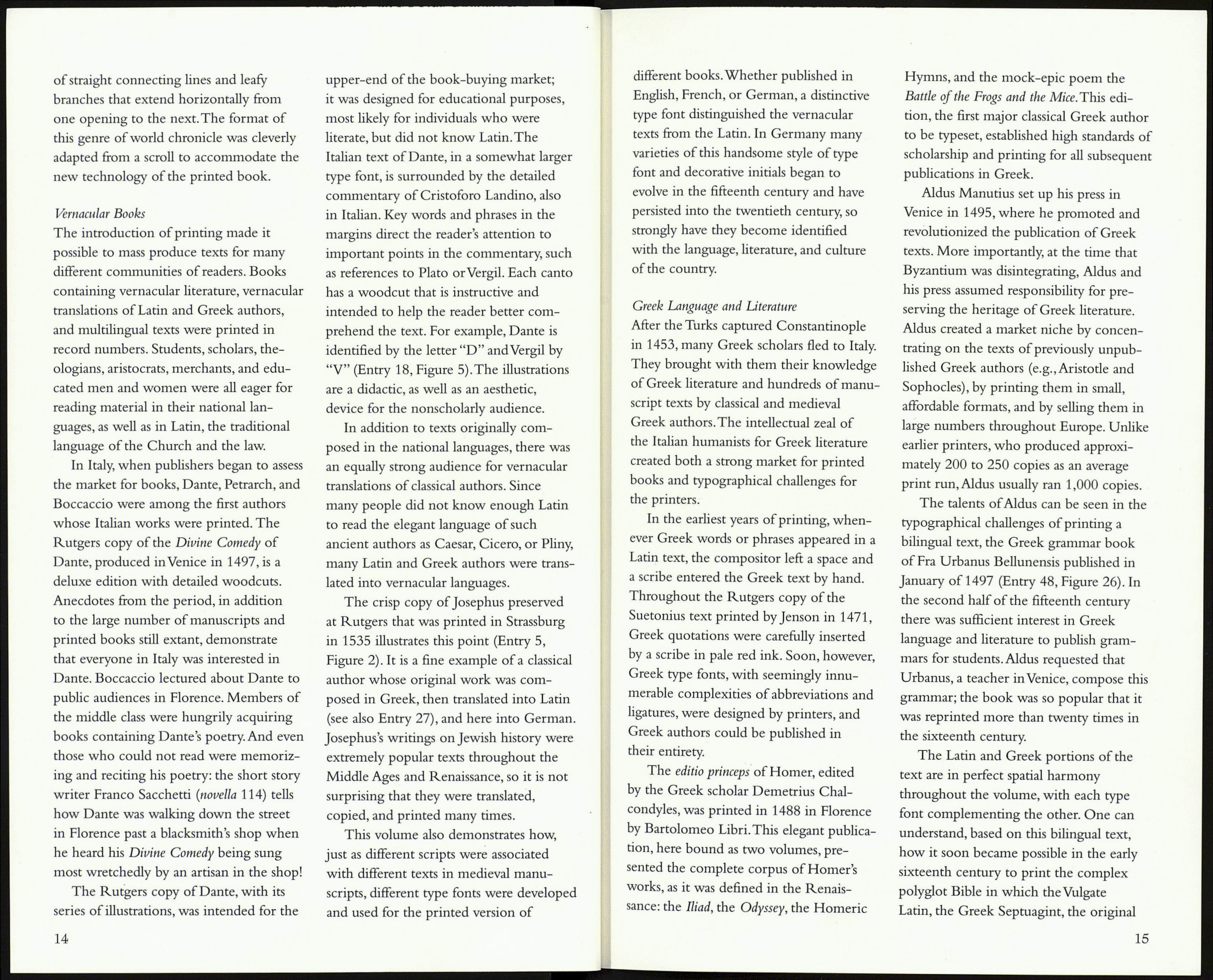 institution would acquire it. From the
beginning, printing was a commercial
venture. Books were printed without spe¬
cific monasteries or individual collectors
as clients for the edition of a given text.
The printer had to calculate carefully
which authors would sell, how many
books to print, who among his present
clientele might buy the copies, and how
to reach a broader market.

In the case of this Josephus volume, the
original artist deliberately left unfilled the
circular space in the lower margin. It was
anticipated that the person who purchased
the book would personalize the copy by
adding the family coat-of-arms. Here the
arms (still to be identified) have been
inserted in ink by a later, unskilled hand.

The origins of the modern printed
book are apparent in the splendid Rutgers
copy of Suetonius, Lives of the Twelve
Caesars, produced in Venice by Nicolas
Jensen in 1471 (Entry 16, Figure 11).With
the revival of classical learning in the Ital¬
ian Renaissance, printers in Italy mimicked
their scribal colleagues, who had been
seeking to recapture the simple nature of
the scripts used in the tenth and eleventh
centuries; they consciously rejected the
often difficult to read, angular gothic
letters of the later Middle Ages. Jensen
created "Roman" types characterized by
plain, yet elegant, letters. Even the large,
hand-painted faceted initials that introduce
each of the twelve Lives (e.g.,"G" for
Germanicus) were modeled after the capi¬
tals found carved on ancient monuments
from the Roman period. The initials in
this volume were faintly outlined first in
lead (an early form of pencil), and then
colored by an artist of considerable skill.

printers for centuries to come. In the
late nineteenth century, William Morris,
enamored of Jensen's lovely fonts, used
them as the basis for his own fine printing.

Transformations in the design and execu¬
tion of the book, some subtle and others
more dramatic, occurred in the early
decades of printing. In addition, beginning
in the 1480s the production of manuscript
books began to decline sharply, and the
production of printed books increased and
dominated the market. As literacy rates
and the demand for printed books rose,
there was a gradual loss of the individual¬
ity with respect to both their text and
physical appearance. The almost infinite
variety of the hand-produced medieval
manuscript gave way to a level of stan¬
dardization typical in an average print run.

Typology of the Printed Book
The combination of increased demand for
the product and the technology of print¬
ing required simplification of the process.
Printers soon developed formal programs
of decoration—initials, borders, and illus¬
trations—that could be integrated into an
overall typographical layout for a given
volume. Colors and highlighting might be
added later by an artist, but the design of
the page, including text and illustrations,
was predetermined when it was printed.

At the most basic level, woodcuts were
substituted for initials.Two volumes illus¬
trate different approaches to standardized
alphabets, which eventually replaced
initials executed by hand. Both Günther
Zainer of Augsburg and Johann Zainer of
Ulm were innovators in book illustration
and were among the first to use woodcut
letterforms in their workshops.

In the Pantheologica produced in
Augsburg in 1474 by Günther Zainer
(who was also a scribe and illuminator
by profession), the boldly framed initials,
adapted from Gothic manuscript models,
were woodcuts later touched with red
(Entry 8, Figure 3). In the imposing Bible
printed by Johann Zainer in 1480, the
lively unframed initials, also woodcuts, are
characterized by luscious, intertwining
leaves lightly highlighted with red ink
(Entry 9, Figure 4).

Extensive sets of woodcut drawings
also were created to illustrate books, and
the same cuts often were used by different
printers for more than one text. In France,
illustrated printed books followed the
extraordinarily creative tradition of manu¬
script illumination, whether in books
composed in Latin or in French. The edi¬
tion of the Legenda aurea sanctorum, printed
in Lyons in 1487 by Martin Huss, offers
many fine examples of early woodcut
illustration. For each saint discussed by the
author, Jacobus de Voragine, a woodcut
provides a visual image to underscore the
main point of the narrative. In several
instances in this volume, the same woodcut
was used multiple times to represent dif¬
ferent saints; for example, there are generic
scenes for beheading a martyr, and for a
saint either reading a book, presumably
the Bible, or merely standing at ease. The
illustration of St. Michael killing the
dragon reproduced here is plain in its style
of execution, yet is vivid in the action
depicted (Entry 31, Figure 17).The
drawing is unsophisticated by modern
standards, but dynamically represents the
demise of the monster and the spiritual
heroism of St. Michael.

By the time that the edition of Vergil
was published in Lyon in 1517, the artistry
of book illustration was well established.

Entry 43, Figure 23 reproduces a scene
from Book I of Vergil's Aeneid. Neptune,
Juno, and the winds are depicted in the
upper part of the picture, while the ships
of Aeneas are buffeted about on the sea
below. The text proper of the Latin epic
appears in a larger size type font, whereas
the series of scholarly commentaries by
Servius, Donatus, and other authors sur¬
round the text in a smaller size font. The
illustration, however, quickly attracts the
attention of the reader, not only because
of its boldness and detail, but also because
of its perfection as an artform.

The physical book as we know it today,
complete with title page and pagination,
triumphantly emerged from the medieval
manuscript conventions. Printers became
comfortable with the contrast of black and
white, and were increasingly less dependent
on the colorful details added by decorators
after the text was printed. Workshops also
experimented with new concepts for the
book, as is evident in a charming world
chronicle (Cronica cronicarum) published
in Paris by François Regnault in 1532
(Entry 33, Figure 18), where a genealogical
"tree" is displayed horizontally.

During the fourteenth and fifteenth
centuries, large genealogical scrolls, often
twenty to thirty feet in length, were
copied and illuminated as luxury goods.
The scroll was the perfect format for rep¬
resenting the lineage of and relationships
among the legendary and historical fig¬
ures; each strand of history would start at
the top of the roll and descend to the bot¬
tom. The text, and accompanying illustra¬
tions of people and places, descended
together vertically.

In the chronicle printed by Regnault,
the historical scroll has been transformed
into the book format. The genealogical
tree is represented by a combination