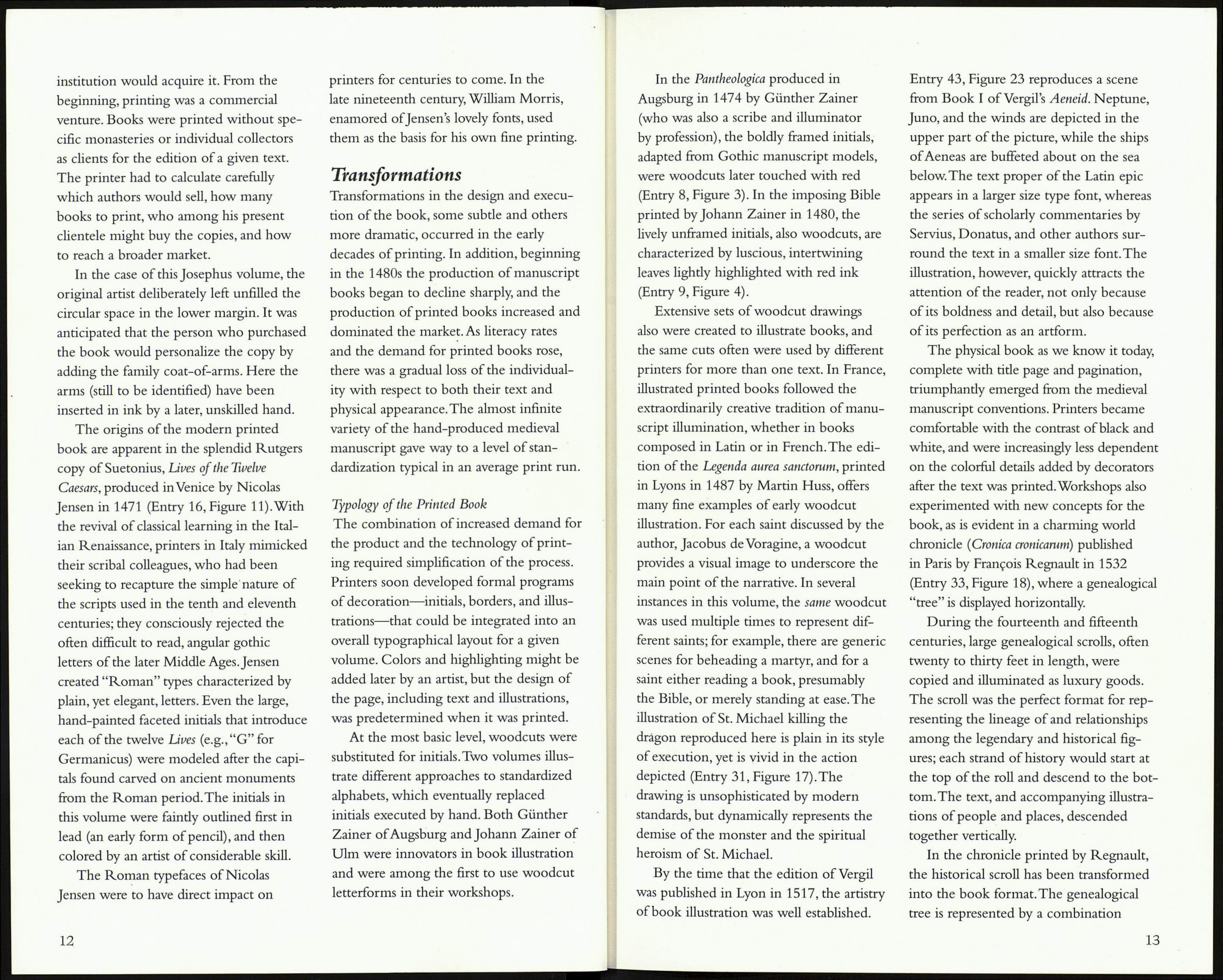 subtle but significant shift in the reader's
attitude toward the book. The most
immediate impact was prompted by sheer
numbers: a single scribe, normally speak¬
ing, worked from one exemplar and
produced one copy; a single printer,
with his workshop, produced from 200 to
1,000 printed copies of a text from his
single exemplar.

Clearly, the effect on the reading public
was to increase suddenly and vastly the
possibility of access to the written word.
What had been a wealthy person's treasure
became over the course of the hundred
years covered by this exhibit a normal,
everyday object in middle class homes.
So valuable were manuscript books in
the Middle Ages that they served as collat¬
eral in pawn shops, they were bequeathed
singly to named individuals, they were
inventoried at the death of a prince as
part of his worldly wealth.

Within a century after Gutenberg's
invention, the only quasi-legal listing of
specific copies of books was to be found
in library catalogs, where the ultimate
purpose was not to appraise wealth, but to
provide a means of intellectual retrieval
and access. Other lists, such as the Index
librorum prohibitorum (first issued in 1557),
all the way up to modern library catalogs,
cite authors and titles, not the actual
physical object of the book.

This leads to a second factor in the
impact of the printed book: the uni¬
formity internal to a given press run.
Gutenberg and his contemporaries were
themselves not unaware of this change;
a monk in Subiaco, apparently the home
of the first printing press in Italy, proposed
that his monastery should embrace the
new technology, that they should embark
upon a program of printing church
service books, with the precise and

Uniformity in books has become such
a standard feature that, for the most part,
we no longer recognize the aid it brings
to scholarship. If I were not confident that
my colleagues in classics were reading the
same scholarly edition of Seneca's Epistles
as I, how could I cite a page reference
upon which to comment, to consider, to
interpret a particular point in this Latin
author's works? Today we cite relatively
few texts according to their internal
organization; one of the few is the Bible,
where we still follow the thirteenth-
century citation format of book and
chapter; the biblical verse numbering only
began with sixteenth-century printed
editions.

The rapid availability of books and the
uniformity of their texts meant that more
people could read books, that more
people could converse with one another
about their contents; printing contributed
to the open access to knowledge and the
more broadly based discussion of ideas,
whether philosophical, literary, theologi¬
cal, or historical.

The Beginning of Printing

The oldest printed book belonging to
the Rutgers University Libraries was
published in Cologne about 1467 by the
prolific printer, Ulrich Zel (Entry 2,
Figure l).The volume illustrates salient
features of early printed books—features
that locate printed books in the medieval
tradition of handwritten codices.

Modest in appearance, the volume does
not have a title page, as most books would
today. Rather, it has a simple heading on
the first page, with the pertinent informa¬
tion about the author and title of the
work in six lines of a slightly larger type

font. A statement with similar information
appears at the conclusion of the treatise.
Neither the name of the printer nor the
place and date of printing are provided
anywhere in the publication.

The book, which contains a treatise by
Johannes Gerson on the ten command¬
ments, confession, and death, is functional
rather than elegant and follows the con¬
ventions of similar texts in manuscripts.
The type font was designed after hand¬
written models of the day that had
numerous abbreviations and letters joined
together in ligatures; the font looks
remarkably like the script the reader
would have discovered in a manuscript
version of the same text. Plain initials and
paragraph marks, added by hand by a dec¬
orator after the pages were printed, alter¬
nate in blue and red in order to demarcate
important breaks in the text, whereas the
initials letters for each sentence were
simply stroked in red.

The audience for this volume included
students and teachers of theology who
were not necessarily interested in the
humanistic learning and education being
strongly embraced in Renaissance Italy.
And printers in fifteenth- and sixteenth-
century Cologne specialized in the pro¬
duction of Latin theological texts in the
medieval tradition.

As these next two figures demonstrate,
at first glance, it may be difficult to distin¬
guish between an early printed book and
a hand-produced manuscript, so closely
did they follow similar conventions of
script, decoration, design, and layout.

Entry 28, Figures 14 and 15 reproduces
a splendid leaf from a liturgical manuscript
hand produced in Beauvais in Northern
France toward the end of the thirteenth
century. It is an exceptionally fine Latin

Missal written and illuminated with gold
and colored completely by hand.

Entry 27, Figure 13 illustrates the
opening leaf of a Venetian printing dated
1481 of the ancient historian, Josephus.
The text was typeset in metal, but the
dense and elaborate border that extends
through the upper, inner, and lower mar¬
gins was delicately added by a professional
artist.

There are also other differences. The
Beauvais Missal was executed on parch¬
ment—animal skin—which for centuries
was the preferred material for medieval
and Renaissance manuscripts. Although
parchment was strong, durable, and
capable of great luster when expertly
prepared, it was very expensive. A single
copy of the Bible, for example, might
require the skins of an entire herd of
animals. Although already in production in
parts of Europe and Asia, with the begin¬
ning of printing, paper quickly replaced
parchment for book production, and, in
fact, all of the early printed books in the
Rutgers collection employ paper as the
support for the written text. The wide¬
spread use of paper and new recipes for
ink in the second half of the fifteenth cen¬
tury made possible, at a reasonable cost,
the extensive print runs and successive
editions of popular works.

What is of greater significance is the
respective markets for the two items.
The Beauvais Missal would have been
made for a wealthy patron who commis¬
sioned the volume according to his or
her personal aesthetic tastes and financial
resources, for every leaf of this manuscript
would have been beautifully illuminated.
It was too expensive a volume to be
produced upon speculation, with the
expectation that some person or some