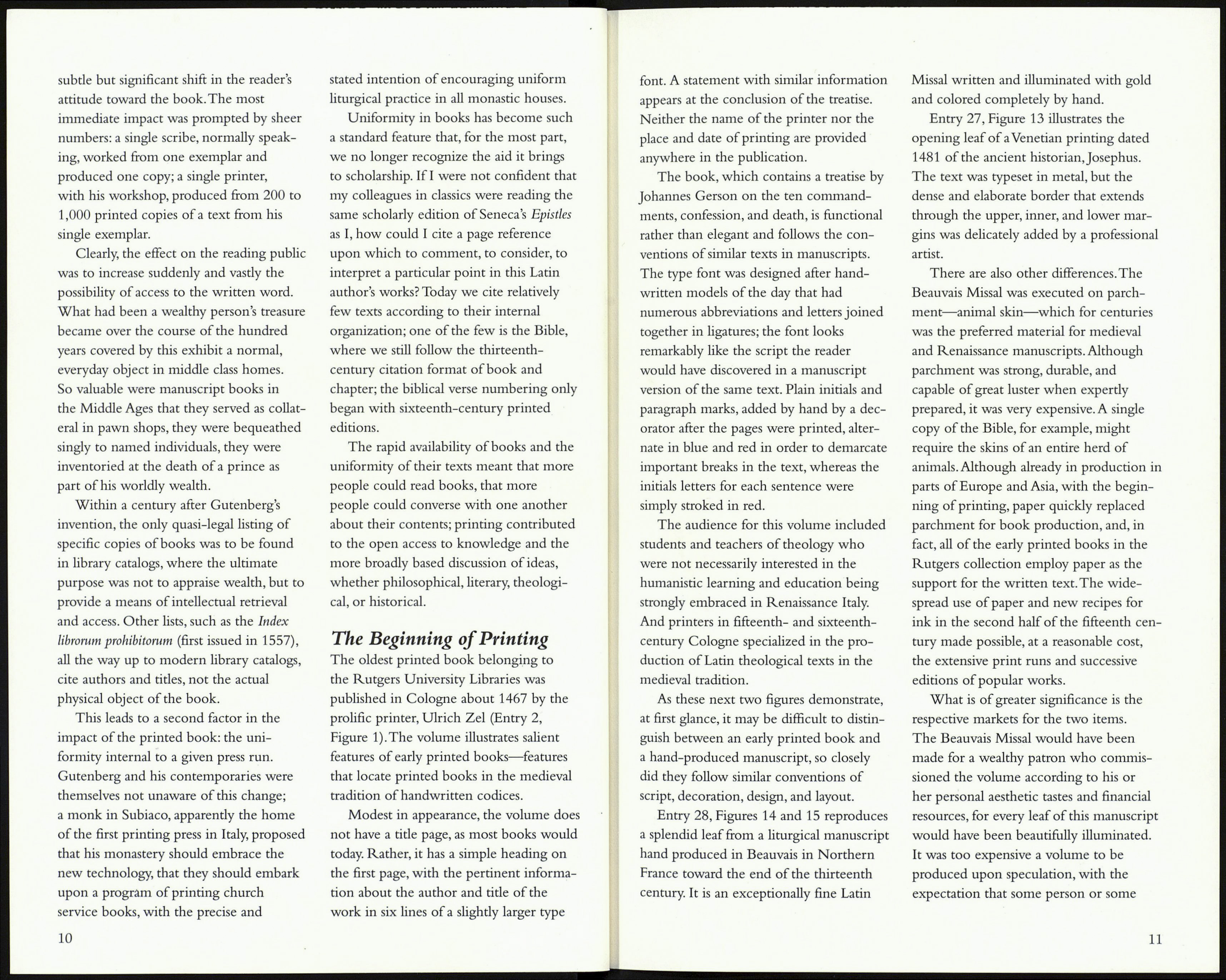 books arts in New Jersey, and realia), the
New Jersey collections are unsurpassed in
documenting the state's history and cul¬
ture. Another treasure of Special Collec¬
tions is the internationally known William
Elliot Griffis Collection. Also well repre¬
sented are collections relating to the con¬
sumer movement in the United States and
to twentieth-century Latin American soci¬
ety, politics, and culture. The University
Archives contains material related to the
history of Rutgers that complement Spe¬
cial Collections New Jerseyana in that
Rutgers was founded in the colonial
period and has had a major impact on
the state.

Less known are Special Collections
holdings outside of these areas. While not
extensive, our rare book holdings include
significant and valuable strengths. For
instance, our eighteenth-century England
collection is characterized by comprehen¬
sive collections of Daniel Defoe (1660 —
1731) and William Cobbett (1763-1835).
The first century of printing is an area of
the collection that has never before been
fully explored. In the course of preparing
this exhibition, we identified approxi¬
mately 175 books printed before 1555,
twenty-eight of which are incunabula-
books printed before 1501. This especially
valued category of early printed books
has now been recorded in the Incunable

Short Title Catalog (ISTC). According to
the ISTC, Rutgers holds three titles for
which there are only three other known
copies in the United States, two for which
there is only one other copy in the United
States, and an astounding five which are
unique in the United States. Among those
titles for which Rutgers has the only copy
in the country, Cato's Disticha de moribus...
(Antwerp, 1487) is one of four known
copies in the world, and Cicero's Epistolae
sekctae (Rome, about 1485) and Stephanus
Fliscus, Setitentiamm variationes, sen
Synonyma... (Paris, about 1492) exist in
only one other copy.

Rutgers is indeed proud to own such
rare incunables. But as S.H. Steinberg
asserts in Five HundredYears of Printing, the
strict cut off date of 31 December 1500
for incunabula forms, from the perspective
of scholarship, an arbitrary distinction.
"This date cuts right across the most
fertile period of the new art, halving the
lives of some of its greatest practitioners,
such as Anton Koberger, Aldus Manutius,
Anthoine Verard, and Geoffroy Tory."
Rutgers' 150 other titles published
between 1501 and 1555 are, as Adventure
and Art convincingly demonstrates, equally
significant and beautiful exemplars of
printing during this initial period of
creativity and growth.

by Barbara A. Shailor

An event of extraordinary historical
significance occurred in Germany
in the middle of the fifteenth century. At
his workshop in Mainz, Johann Gutenberg
invented the concept of printing from
movable metallic type. Using this state-
of-the-art technology, Gutenberg was
the first to mass produce approximately
180 copies of a large, magnificent two-
volume Bible today known as the
"Gutenberg Bible."

What happened in the next hundred
or so years of printing after this remark¬
able editio princeps of the Bible is the
story of this exhibition and catalog. It
is not, however, a taxonomy of type fonts
through the decades, but a brief synopsis
of the "adventure and art" (Afentur und
Kunst) of early printing, as Gutenberg
himself described his initial experiments.
The first printed books are artifacts that
tell us about the survival and transmission
of texts, in Latin and the national lan¬
guages; about the cultures that produced
and read the books; and about the incred¬
ible dissemination of knowledge that
happened at the end of the Middle Ages
and the beginning of the Renaissance. In
addition, a discussion of the first hundred
years of printing encourages us to think
critically about the future of printing and
publishing in the present digital age.

a double-faced deity who could look back
toward the past and at the same time
forward toward the future. Gutenberg and
his colleagues drew upon the models of
books that were developed during the
previous millennium.The initial printed
volumes replicated, often meticulously, the
hand-produced manuscript books, which
were copied by scribes and decorated in
gold and colors by artists.

The very shape of the printed book,
including the one you now hold in your
hands, had been determined by the fourth
century with the emergence and triumph
of the parchment codex (or book, as we
term it today) over antiquity's roll format:
almost always rectangular with the long
axis running vertically, the book can be
said to derive "naturally" from the rectan¬
gular shape of an animal skin. But most
early printing, and virtually all of today's,
uses paper as its medium, a substance that
could be produced in almost any shape
or design; and yet, with the early printers
as with today's industry, the idea of the
rectangular (or sometimes square format
for children's books) has remained
remarkably constant.

At the same time that the cradle of
printing was indebted to the past, Guten¬
berg and his contemporaries initiated
a cultural and intellectual revolution
through their texts "written in metal."
The invention of printing engendered a