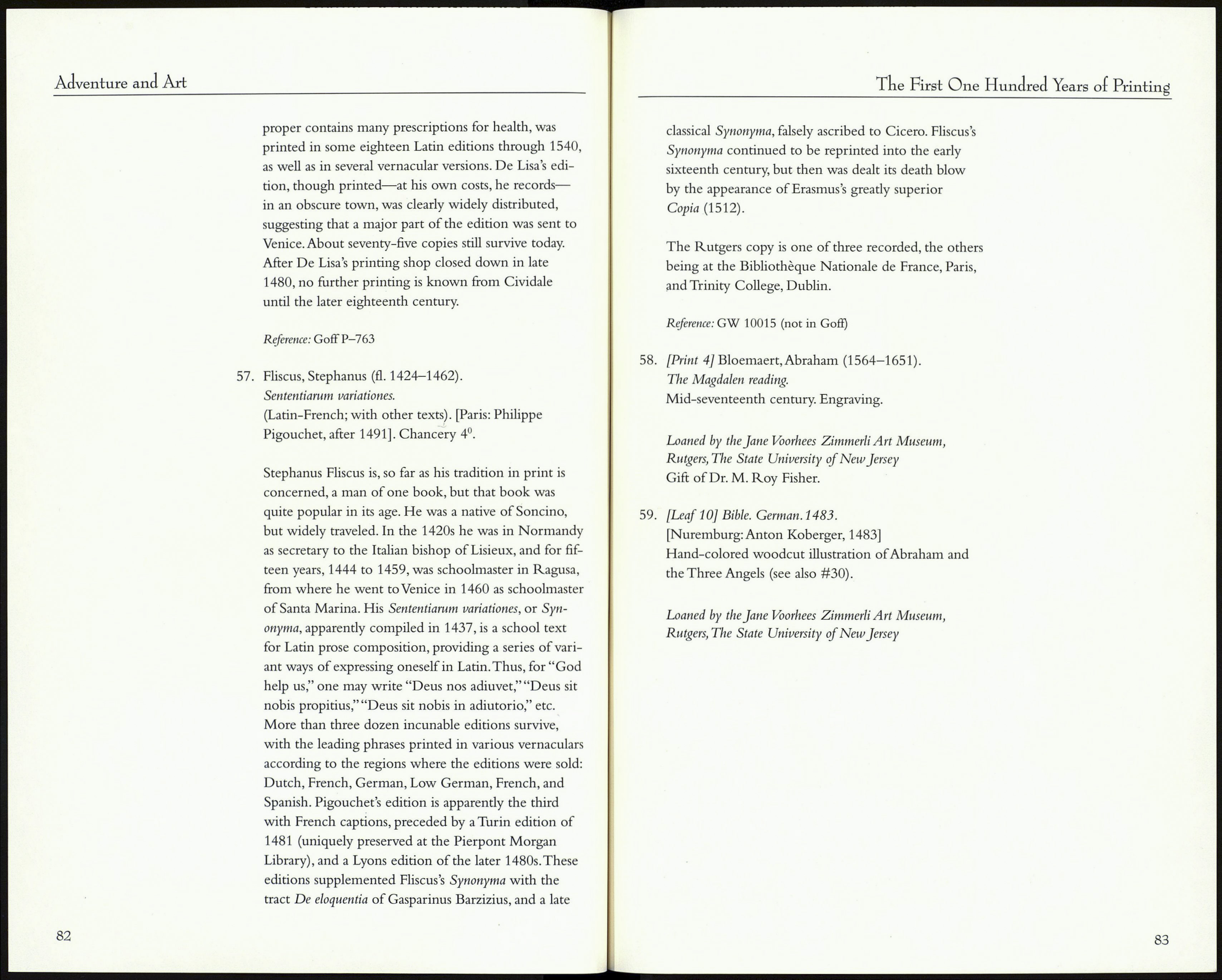 Torquemada's spiritual and doctrinal writings are
known.This Delft book, with the fine woodcut device
of the first printer ofthat city, Jacob van der Meer, is
the only incunable edition of Torquemada's treatise on
the Eucharist, composed by him in Basel, 1436. At
least two sixteenth-century editions are known.

The Rutgers copy bound in quarter leather: formerly
owned by George Dunn, with pencil notations on
front cover and fly-leaf; acquired by the Libraries
through a fund established by Charles H. Brower '25
and Mrs. Brower; 665806 (-mf).

first edition. The first fully dated book printed in
Louvain, the sole university town of the Low Coun¬
tries. Johannes de Westfalia had earlier printed in Alost
(1473-1474), in partnership with Thierry Martens,
using the same type font as in his first Louvain edi¬
tion. Johannes de Westfalia's colophon describes the
font as a "littera vera modernata, abscisa, et formata," a
phrase difficult to translate with precision, but appar¬
ently referring in part to its clarity of design. The
punches for the font were almost certainly cut in
Venice, and it is likely that both Johannes de Westfalia
and Thierry Martens had learned the printing trade
there. Johannes de Westfalia remained the dominant
printer of Louvain to the end of the century. He mar¬
keted his books vigorously in England as well as
locally.

The Ruralia commoda of Crescenzi or Crescentiis is
the most important medieval treatise on agronomy,
and continues to be studied for its diverse information
on many aspects of medieval rural life. Its author was a
well-off Bolognese advocate and member of the city's

senate. He composed his treatise at about the age of
seventy, when he retired from the city to his country
estate,Villa dell'Olmo; he states that he wrote at the
request of his friend Aimerico da Piacenza, General
of the Dominican order. The Ruralia commoda main¬
tained its reputation as a practical encyclopedia for
about three hundred years. Besides its manuscript
tradition, it became frequently printed in the original
Latin, and in Italian, French, and German versions.
There were even two Polish-language editions
(1549,1571).

Some Rarities in
trie Collection

The first book printed in Cividale, 115 km northeast
of Venice. Its printer, Gerardus de Lisa, was Flemish.
The path that brought him to Italy and into the print¬
ing trade is unknown. He was the first printer of Tre¬
viso (1471), and after producing about twenty editions
there he wandered, emerging as printer successively in
Venice (1477-1478), in Treviso again (1478), in Civi¬
dale (1480), in neighboring Udine (1484-1485), and
then for a third time in Treviso (1492-1494). Little
further is known of his biography other than that he
married a native of Udine, and that by 1500 she was
a widow.