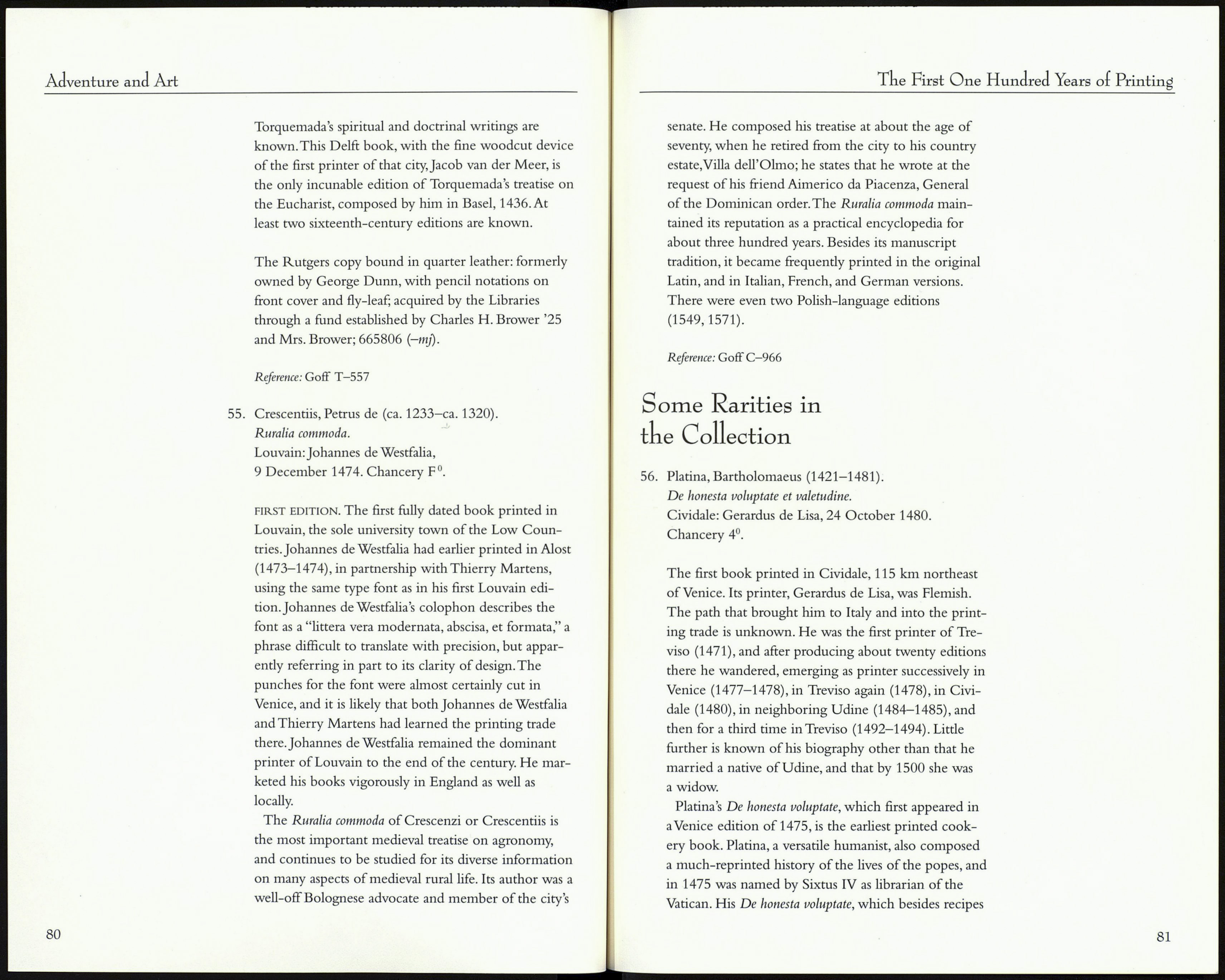 costs of producing an edition of 1,000 copies of
the Repertorium: Gómez to provide the paper, and
Albert to provide the types and labor. (It may be
noted that the paper, locally made, is of highest
quality.) Albert was involved in the production of
at least five otherValencian incunables, some in Latin
and some in Catalan.

About 150 surviving incunable editions were printed
of the late classical maxims commonly called Cato or
Disticha Catonis: a collection of hexameter couplets to
which the name of the famously upright Roman
citizen Cato the Censor was attached. The incunable
printings represent a wide range of versions, with or
without various commentaries and supplementary
texts, and in various translations, both prose and verse,
into Dutch, English, French, Low and High German,
Italian, and Spanish. So many of these editions survive
in only a single copy that it is likely that others have
disappeared entirely. The chief audience for all these
editions was the young, adolescentes, whether for formal
school reading and memorization, or for less formal
vernacular instruction.

This edition is the last of three published by Gerard
Leeu in Antwerp (1485,1486, 1487), all of which
display a striking title woodcut of a master and pupil,
recycled by Leeu from a Dutch devotional text pub¬
lished by him in 1484. Leeu's editions add a commen¬
tary composed by a Cistercian of Clairvaux, Robert of
Evremond (d. 1480), addressed by him to a pupil, one
Pietro of Saluzzo.The commentary first appeared, in

slightly different form, in a Constance edition of
ca. 1473. Leeu's version became popular, and was
reprinted by other European shops in thirteen more
incunable editions, some of which copied his dis¬
tinctive title-page cut. The Rutgers copy of the
1487 edition is one of five recorded, and the only in
this country.

The Distichs of Cato continued in popularity long
after 1500.There were influential editions by Erasmus
and by Joseph Scaliger among others. An English
translation made for his daughters by James Logan of
Philadelphia was printed by Benjamin Franklin, 1735,
the first classical work to be printed in America.

Card.Juan deTorquemada (Turrecremata), uncle of
the infamous Spanish inquisitor, was, with his friend
Nicholas of Cusa, one of the two chief defenders of
papal authority in his century. Like Cusa, it is known
that Torquemada was an early enthusiast for the new
invention of typography. (In De Idiota (1450) Cusas
remarkable notion of a continuously expanding library
seems to anticipate and extend spiritual authority to
the development of movable type—mj.) He was, in
fact, apparently the first author to commission a
printed edition of one of his own writings. Torque¬
mada 's Meditationes on the frescoes of Santa Maria
sopra Minerva in Rome, the church where he would
be buried, were printed in Rome by Ulrich Han, with
woodcuts based on the frescoes, in an edition dated
31 December 1467 (perhaps to be interpreted as
1466), the first woodcut-illustrated book printed in
Italy and possibly the first book printed in Rome.
More than sixty incunable editions of various of