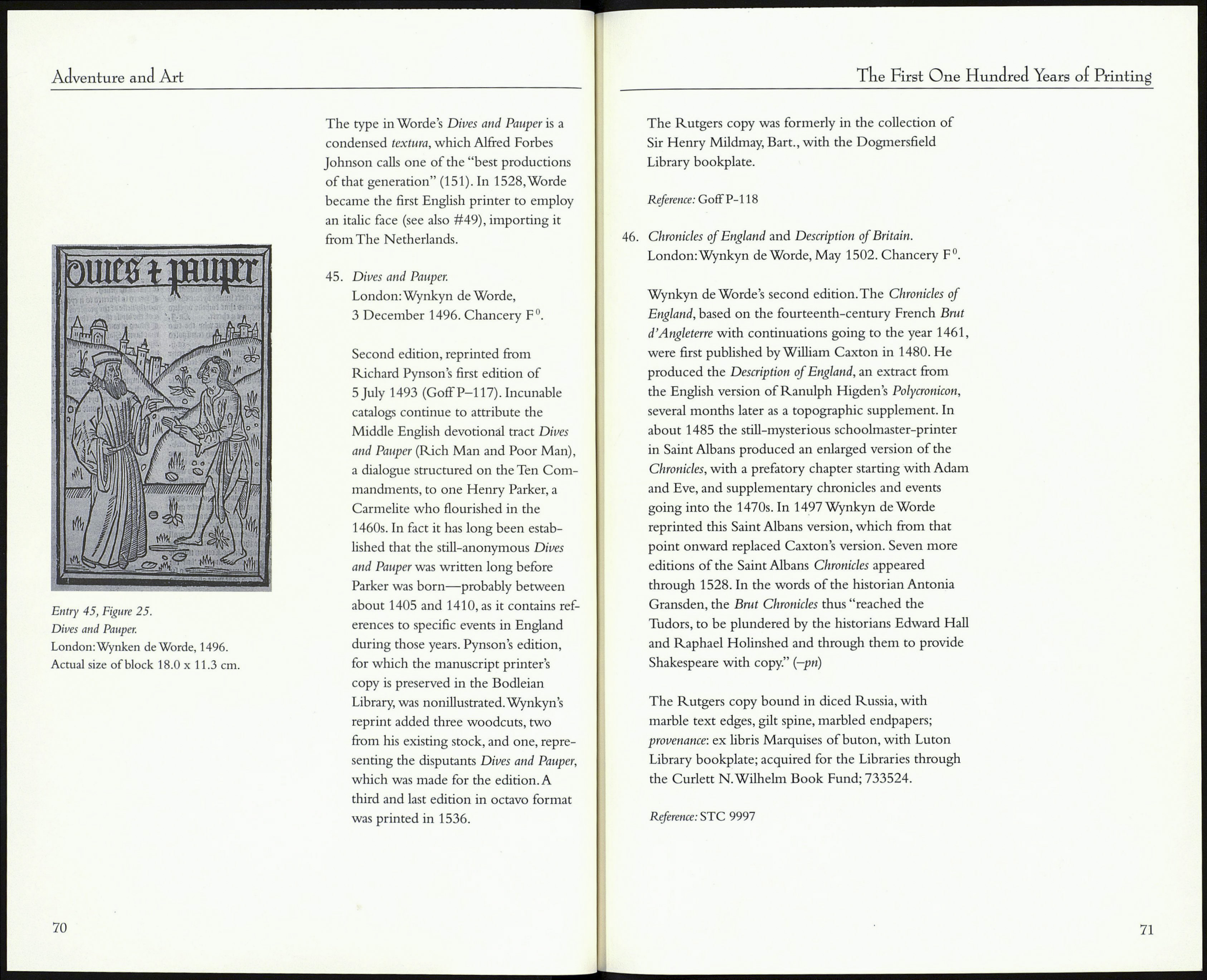 Exhibition copy bound in contemporary blind-
stamped vellum over wooden boards, with metal clasps
(missing); rebound with original vellum reattached;
once owned by the Benadictine monastery of
Ochsenhausen (1093-1803) in Württemberg.

England's first printer was native born, a boast that no
other European country but Germany could make.
Born in the Weald of Kent, William Caxton (ca. 1422-
1491) first prospered as a cloth merchant in Bruges, where
he attained the prestigious position of "governor" of all
English merchants, and served as an English diplomat.
When Caxton opened his printing office in Bruges, it was
not for the usual purpose of fashioning a livelihood, but in
order to self-publish his English translation of Raoul
Lefèvre's Recueil des histoires de Troye, which he undertook
at the pleasure of Margaret, Duchess of Burgundy. Caxton
and his partner, Colard Mansion, a calligraphier attached to
the Burgundian court, published the Recueil between 1474
and 1476, making it the first printed book to appear in the
English language. Upon returning alone to England in
1476, Caxton established the first press on English soil, in
the abbey precincts at Westminster. (Printing historians cite
this typographical beachhead as the possible source for the
colloquialism,'a chapel of printers,' to refer to the printers
within a particular shop.) Of the 100+ books Caxton
published, more than half were in English, including the
editto princeps of several of the immortal works of early
English poetry, including Geoffrey Chaucer's Canterbury
Tales (1478), John Gower's Confessio Amantis (1483), and
Thomas Malory's Le Morte d'Arthur (1485).

At the time Caxton opened his first print shop, Bruges
was a rich, cosmopolitan city, renowned for its production
of expensive, deluxe manuscripts. Although his original
typeface comes directly from Mansion, and indirectly
from the Flemish bâtarde manuscripts Mansion imitated,
Caxton's later types reflect the influence of early fifteenth-
century English manuscripts.

Caxton's assistant, Wynkyn deWorde (d. 1534), suc¬
ceeded him after his death, becoming, in 1491, England's
second printer and its most prolific. Worde published 800
works, many of which were school books, his specialty.