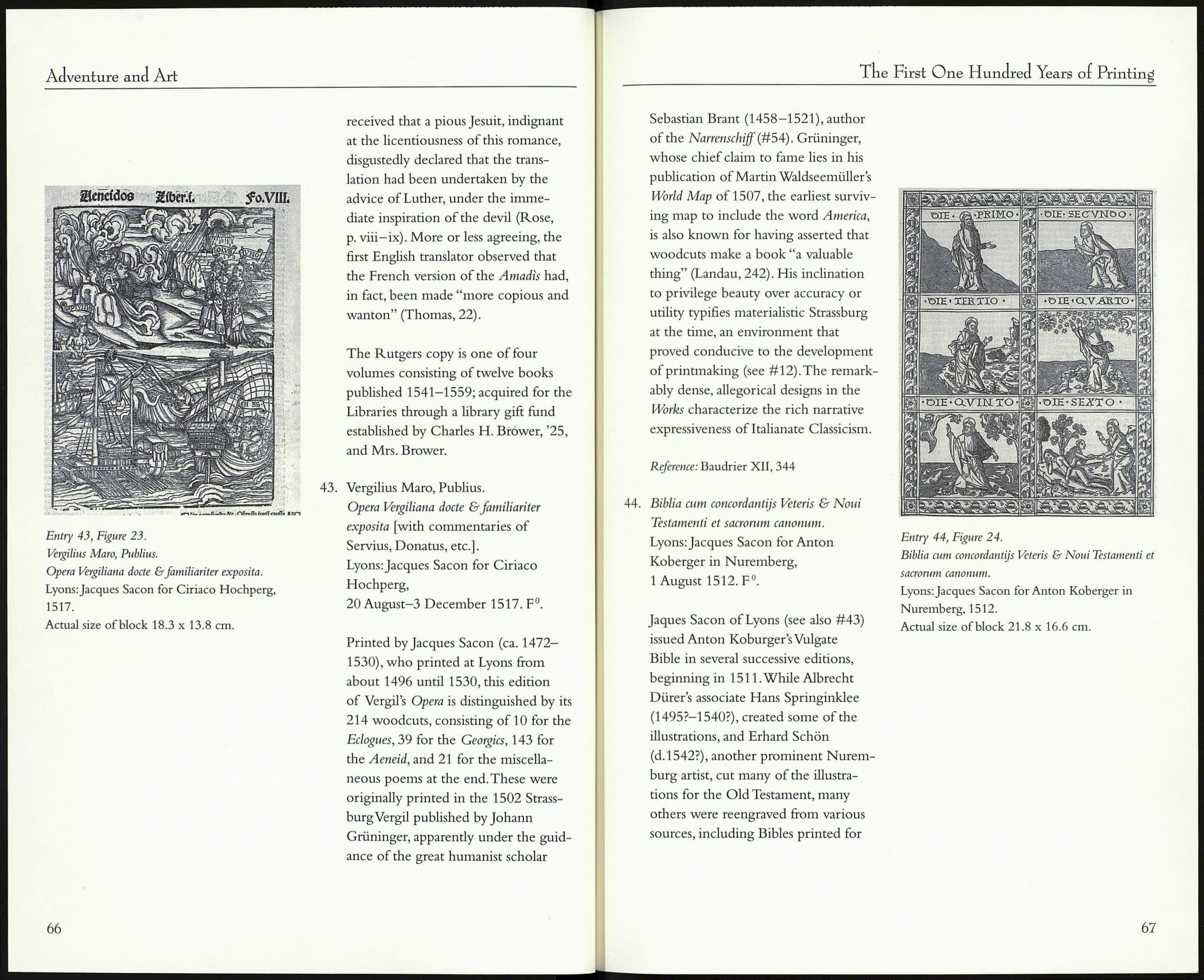 Printed in Paris by Wolfgang Hopyl
(d. 1522), edited by Augustin Agée.
Wolfgang Hopyl came from The
Hague or its environs and established
himself in Paris by 1498. Although
considered a technically skillful and
artistic printer, Hopyl is more highly
regarded for the accuracy of his com¬
positors and the ability of his learned
press correctors (see #15). His boast,
that even if he were given a faulty
manuscript, he could turn out a book
almost without a flaw, was freely
acknowledged by his contemporaries,
both in Paris and abroad, who would
send Hopyl books when they desired
accurate, scholarly work. His example
influenced the great scholar-printers
of the sixteenth century. Along with
his associatejohann Higman (d. 1500),
Hopyl specialized in books of philos¬
ophy, theology, and mathematics.

This copy is in an unrecorded
sixteenth-century London binding
of contemporary calf over wood, with
brass clasps (missing), blind stamped
with animal, bird, and floral designs

(rebacked). Bound in London for William Bretton,
a merchant, with whom Hopyl copublished several
other titles.

Most modem readers will be familiar with the Amadis
de Gaula only through the mediation of Cervantes. In
his Don Quixote, Part One (ChapterVI), the priest and
barber survey Quixote's library, and it is the Amadis
they first handle; later, in Part Two (Chapter I), the
priest gives pride of place to the Amadis as "the first
book of chivalry printed in Spain." Indeed, despite its
relative obscurity in our century, scholars have called
the Amadis one of the most influential works of prose
fiction ever published; by the end of the first quarter
of the seventeenth century it had been translated into
French, Italian, German, English, Dutch, Portuguese,
and Hebrew.

The first book of the French translation from the
original Spanish edition (1508) appeared in 1541 from
the press of Denis Janot (d. 1545), who published an
additional book every year until 1546 when the Sev¬
enth Book appeared. An Eighth Book was added in
1548 and a Ninth in 1551, with subsequent books
issued randomly thereafter. For the beauty of their
illustrations, the first four books taken together have
been praised as one of the most remarkable illustrated
books published in Renaissance France.

The hero, Amadis, a composite of Sir Lancelot and
Tristan, became for the French at once the idol of the
soldier, the courtier, and the poet; so warmly was he