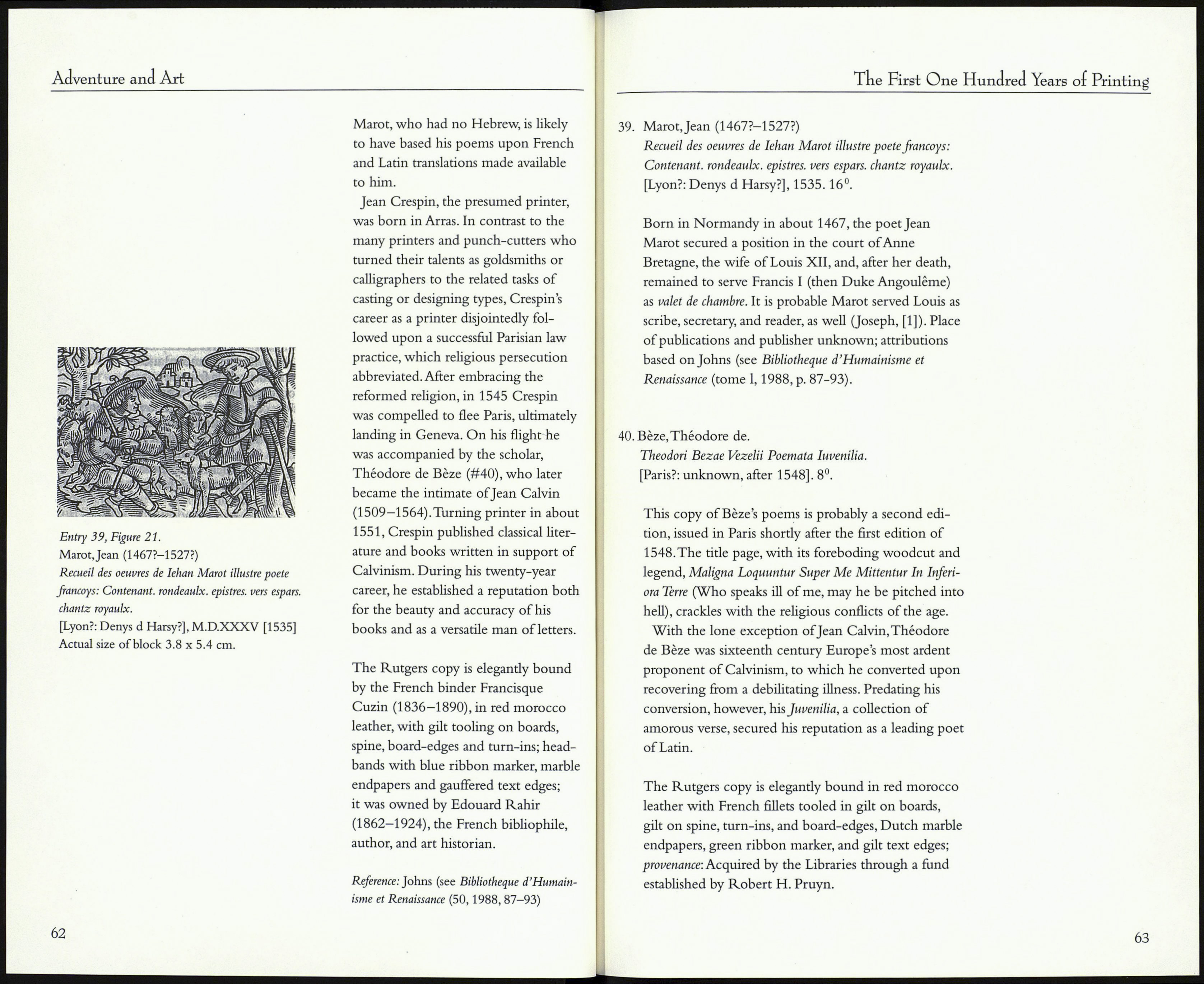 Even while France rose to become the
center of printing in the West, civil vio¬
lence and religious persecution worked to
undermine her. After 1534, Catholic
France grew progressively intolerant of
Protestantism, and publishers who issued
Protestant material faced considerable haz¬
ards: Etienne Dolet, who published Cle¬
ment Marot's Calvinist satire L'Enfer (1542),
met a gruesome death at the stake in Paris
in 1546. With the subsequent death of
François I, a year after Dolet's, the level of
ferocity only intensified, and a large num¬
ber of French printers were forced to flee
to Geneva, including Henri and François
Estienne, two of history's greatest scholar-
printers (see #50). Publishers sympathetic
to Protestant authors remaining in France
therefore took care to protect their identi¬
ties, such as omitting imprints from their
publications—as we see in the works they
published by Clément Marot and the
zealous Calvinist Théodore de Bèze
(1519-1605) (items #38-40).

Geoffroy Tory's impact on French
typography can be felt here, in the
delicate woodcut. The penchant of
French book design for decoration
continued the French tradition of
sumptuous manuscript illumination
(see #28), which can also be observed
in the illuminated border on the title
mortice, and in the border of the
French sixteenth-century Book of
Hoots (see #36, #A9).

Exhibition copy bound in early calf over pasteboard,
with gilt and blind tooling on boards and spine,
headbands, and gilt text edges; provenance: ex libris:
Theodore Low DeVinne (1828-1914). DeVinne
was one of the most admired of nineteenth-century
American printers and printing historians. Stanley
Morison called him "the greatest master-printer of his
epoch" (Morison, Letter Forms, 71). Among his most
valuable works on typography are his The Practice of
Typography (1900-1904), The Invention of Printing
(1876), and Notable Printers of Italy During the Fifteenth
Century (1910).

Son of the court poet Jean Marot (see #39), Clément
far surpassed his father's accomplishments to become
one of the finest poets of the French Renaissance.
Literary historians trace the influence of his urbane
wit in the poetry of his French contemporaries and, as
well, the Elizabethans, in particular, Edmund Spencer
(1552?-1599).Although the theologians of the Sor¬
bonne condemned them, Marot's lyrical paraphrases of
the psalms of David are now considered one of his
principal claims to fame and mark the "beginning of
modern French prosody" (Joseph, [1]). George Joseph
attributes the source of the displeasure felt at the
Sorbonne not to the quality of the paraphrases, but to
Marot's having composed them in Geneva, the strong¬
hold of Calvinism. Setting aside the hostility of the
Sorbonne, the psalms have occasionally been criticized
for nonpolitical reasons, too: Orentin Douen (1830-
1896) reports that Voltaire scorned the elegant para¬
phrase of Psalm 68, Que Dieu se montre seulement, as fit
to be sung by lecherous bodyguards (Douen,l:471).