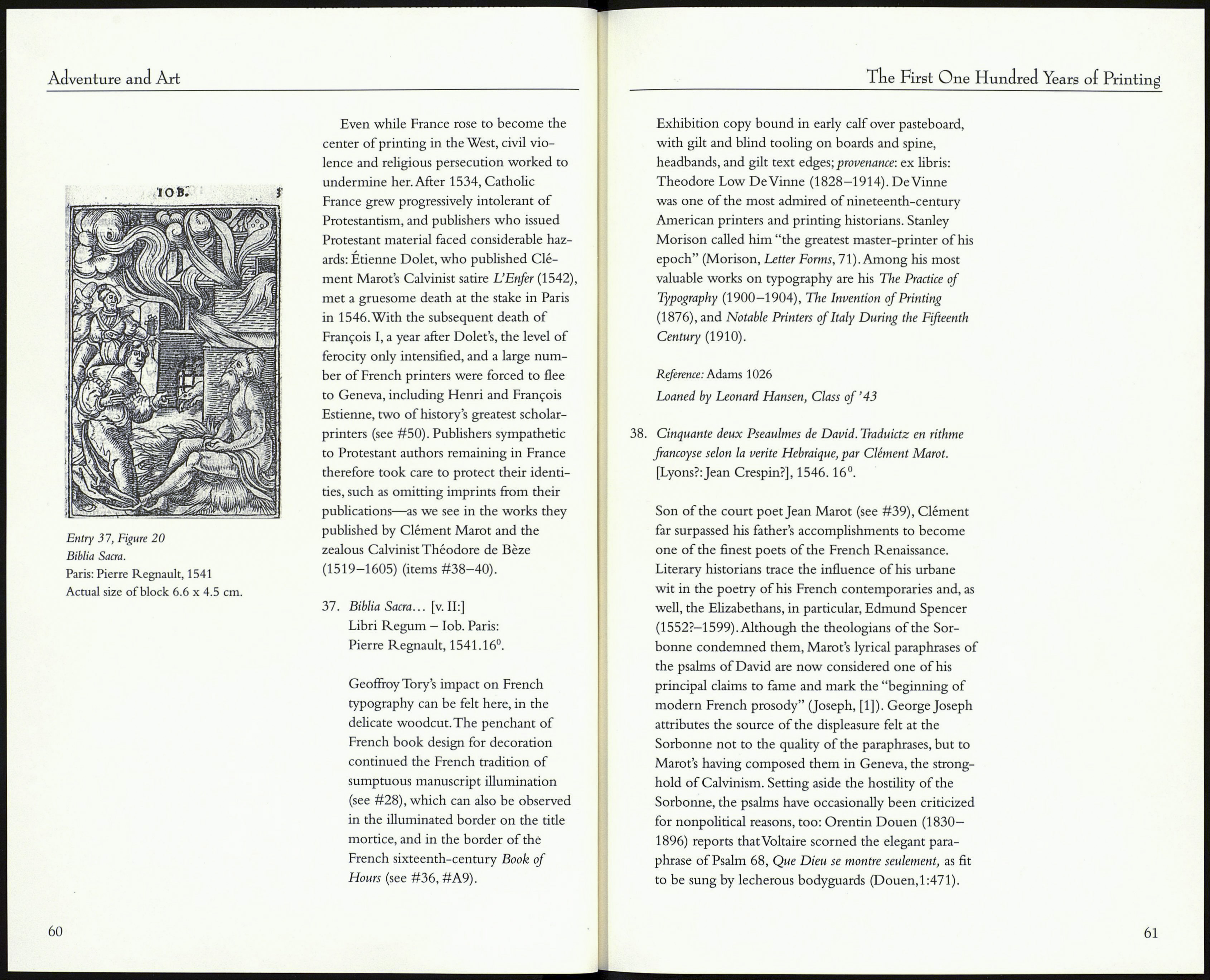 François Regnault (d.1540) printed
the Cronica cronicarum, a history of the
world, in Paris, for Jean Bonhomme
(d.1552), probably in 1532. Regnault
came of a provincial family and began
printing in about 1520. As is true of
most printers, Regnault was more of
a businessman than a fine printer or
conscientious scholar. He is known
chiefly for his successful relations with
the English book trade, a specialty that
demanded a fine degree of diplomacy
and could at times prove hazardous. In
1538, while working on an English
Bible, his printed sheets were seized
and publicly burned, though Regnault
escaped unharmed.

The textura titling type and rotunda
text type used for the Cronica croni¬
carum suggest an older, more formal
book aesthetic calculated to appeal to
the merchants, physicians, and lawyers
expected to buy it; their formality
stands in vivid contrast with the book's
robustly eclectic composition.

Woodcut map hand colored; two pages across "Der
Werlt"Blat XIII. Schedel borrowed the world map
from Ptolemy, without emending its obvious errors,
or, more unfortunately, without including the news of
Columbus's discoveries, which had recently been sent
abroad. The border contains twelve dour windheads
while the map is supported in three of its corners by
the sober Old Testament figures of Shemjaphet,
and Ham.

The following volumes in small formats, illustrated by
small woodcuts, reflect several significant cultural and
historical influences.Their petite size speaks to the spread
of reading and book ownership. Books like these could be
produced more cheaply than the grander-sized folio and
quarto volumes, and thus could be bought and used by
individuals of lesser means (enabling both a more diverse
audience and more specialized kinds of text). In addition,
the charming woodcuts here demonstrate the influence of
Geoffroy Tory (ca. 1480-ca. 1533), France's Imprimeur du
Roi, as well as a poet and gifted, if eccentric, typographical
designer. His Champ Fleury (1529) not only established the
use of the accent, apostrophe, and cedilla in French print¬
ing—without which written French would now be quite
changed—but it also popularized a kind of illustration in
which the thickness of the engraved lines balanced the
thickness of the lines in the letter forms. The equilibrium
of type and illustration enhanced the clarity of the illus¬
trated page for which sixteenth century French printing
became renowned.