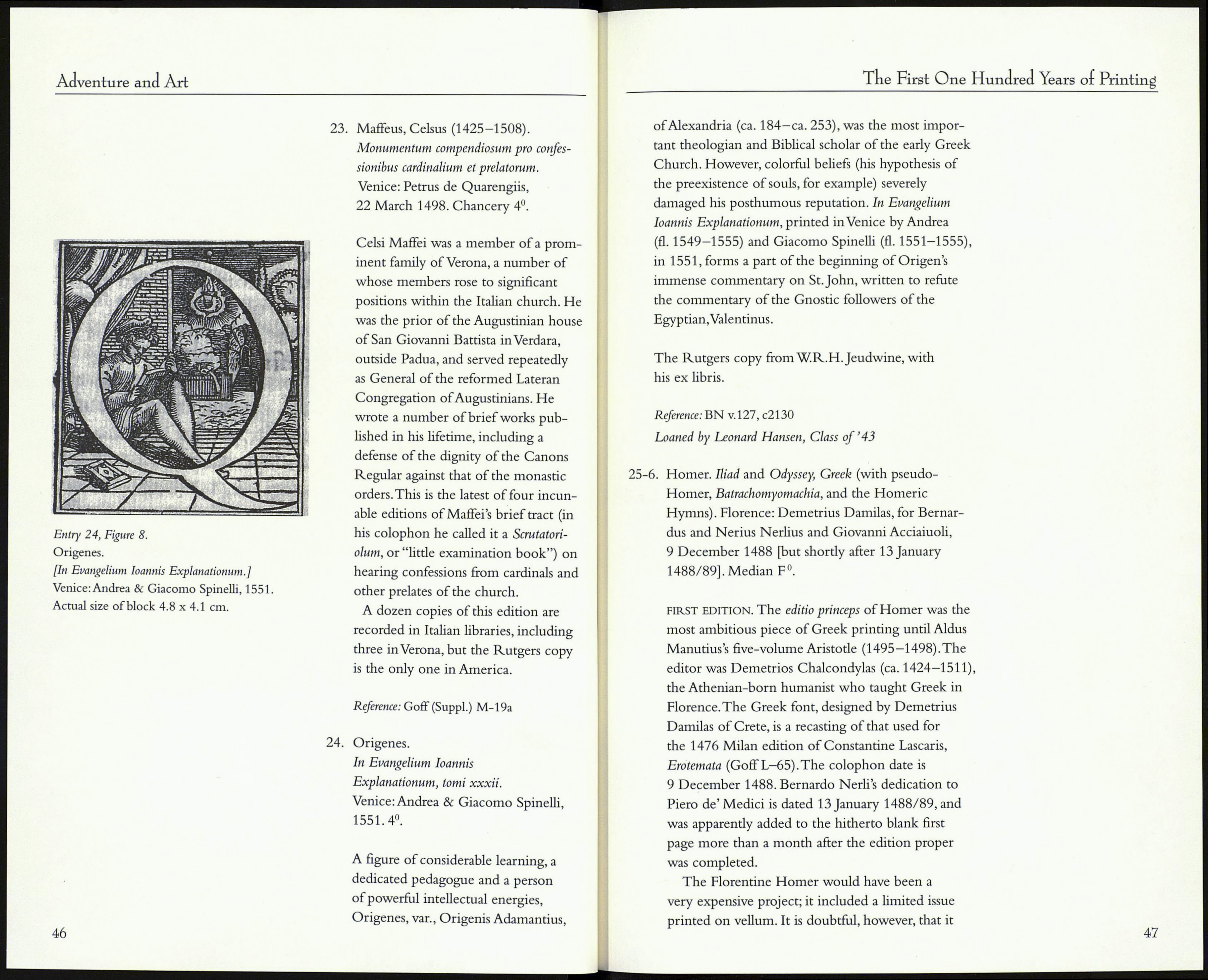 contain regional maps of the American continent.
Giacomo Gastaldi had the maps beautifully engraved
on copper, which marked a turning point in the his¬
tory of map production: from now on the majority of
maps preferred copper over wood since its hardness
gave the engraver the ability to render greater detail.

The De re rustica of Columella (fl. ca. 36-65 A.D.), in
twelve books, was the most comprehensive of the clas¬
sical Roman treatises on agriculture. As a complete
text, it was printed in the incunable period together
with other treatises of Cato the Censor, Varrò, and
Palladius as a collective Scriptures rei rustíate or Opera
agricolationum (Venice: Jenson, 1472 and subsequent
editions). Book X of Columella, on gardens, which
was written in hexameter verses rather than the prose
of the remaining books, also had an independent and
self-standing popularity. Besides the five incunable
editions of Scriptores rei rusticae, there were seven brief
editions of Book X, De cultu hortorum.The present edi¬
tion, although treated in incunable catalogs as a work
of Columella, is in fact a Renaissance commentary on
Book X, composed by the Roman humanist Pompo¬
nius Laetus, and completed by him in 1467 or before.
Pomponius s commentary is known in two versions,
a fuller one with his name given, and a shorter one
(as here) without his name. The full version was first
printed as surrounding commentary to an edition
Columella Book X (Goff C-764,Venice, ca. 1481),
and then from 1494 onward it was included regularly
in editions of Scriptores rei rusticae. The shorter, anony¬
mous version was separately printed in three Rome
editions between ca. 1471 and ca. 1490, this being the
second of the three. These separate editions, probably

intended for local school use, are quite rare; the first
edition is not represented in America, and this is the
only American copy of the second.

Cicero, who was taken to define the standard of Latin
prose, was (excluding the school grammar of Donatus)
the most widely printed classical author in the incun¬
able period. More than 330 fifteenth-century editions
of his writings survive, from a collected Opera (Milan,
1498-99) to many dozens of smaller collections and
individual works. The present collection of 63 selected
letters forms a distinct publishing class among the
many editions of Cicero's letters. It was first printed
in Naples, 1471, with a dedicatory letter from Petrus
Bartolacius of Benevento to one Alvarus de Cosman
(Guzman?), perhaps his noble pupil.Twelve further
incunable editions followed, dropping the dedication
of Bartolacius: ten containing the letters alone, and
two more with a commentary by Martinus Phileticus.
All these were printed in Naples or Rome. It is curi¬
ous to note, however, that sales were far from local.
Most of the printers were Germans, and they clearly
maintained trade connections with their native land,
leading to wide distribution of copies north of the
Alps. Today, of the total of 13 editions—all rare—
only 5 are represented in Italian libraries, and more
copies are known having early German ownership
indications than Italian.

The Rutgers copy, one of three known (the others in
Rome and Lausanne), was formerly owned by George
Dunn and C.W. Clark, and was presented to Rutgers
by the late New York bookdealer John F. Fleming.