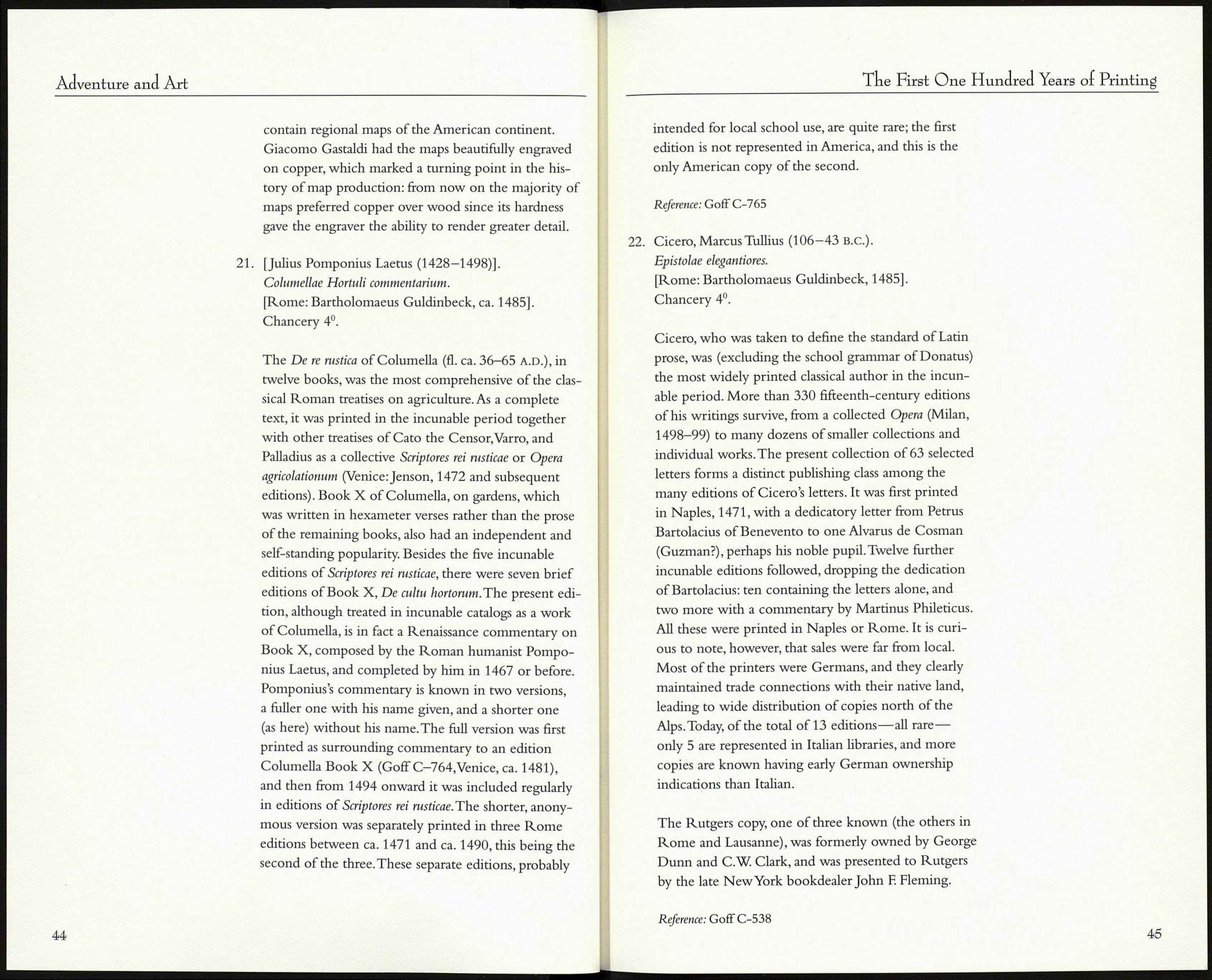 edition by Quarengiis, 1497.The
woodblocks remained in Venice, and
were used again by Bartolommeo Zani
in his 1507 Dante.

The Rutgers copy contains the own¬
ership inscription of "Elizabeth Lecky
Wood, Rome, 1870"—a place and
time when, one imagines, almost every
little antique shop might have a few
incunables lying about. Presented to
the Libraries by E. Byrne Hackett, Esq.
(b. 1879); 212695.

first edition. This collection of let¬
ters written by Filelfo (Latin, Philel-
phus) between 1427 and 1461 is one
of the first substantial publications of a
living humanist author. Although the
edition is undated, Filelfo referred to it
as recently published in a letter he
wrote to a friend on 6 October 1473.
The collection became popular as a
model of Latin prose. About twenty
more editions appeared before the end
of the century, either complete or in
abridged versions for school use. The
printer Vindelinus de Spira, with
whom Filelfo was acquainted, suc¬
ceeded his brother Johannes de Spira
as head of the first printing shop in
Venice (1469). In September 1469

The First One Hundred Years or Printing

Johannes had obtained from the Venetian senate a
five-year monopoly for printing in Venice, but his
death shortly afterward voided the privilege, and over
the years 1470-1472 about fifteen more printing
shops opened in Venice—though many of these
folded up again in short order.

The Rutgers copy of Filelfo's Epistolae is of great
interest for its early ownerships. It was first acquired by
the Florentine ecclesiastic Giorgio Antonio Vespucci
(ca. 1434-1514), who had a high reputation for the
humanist school he led. Among his pupils was his
nephew Amerigo Vespucci, the explorer and travel
writer whose name became attached, in the first
decade of the sixteenth century, to the two new conti¬
nents of North and South America. In 1499 Vespucci
entered the Dominican convent of San Marco. He
donated the major part of his extensive library of
manuscripts and incunables, including this volume, to
the convent's famed library, which was a chief resort of
Florentine humanists.The volume contains Vespucci's
autograph inscription, extensive red-ink marginalia
apparently in his hand, and the acquisition note and
shelfmark of San Marco: "afratre Geòrgie antonio
vespuccio 1499. In bancha xxviij occidentalis." Many of
Vespucci's books are still preserved in the Biblioteca
Nazionale and the Biblioteca Mediceo-Laurenziano in
Florence.The Rutgers volume is one of only a hand¬
ful known outside of Florence.

The first regional map of the east coast of North
America: from Ptolemy's La Geografìa. This edition
was the most comprehensive atlas produced between
Martin Waldseemiiller's Geographiae of 1513, and the
Abraham Ortelius Theatrum of 1570, and the first to