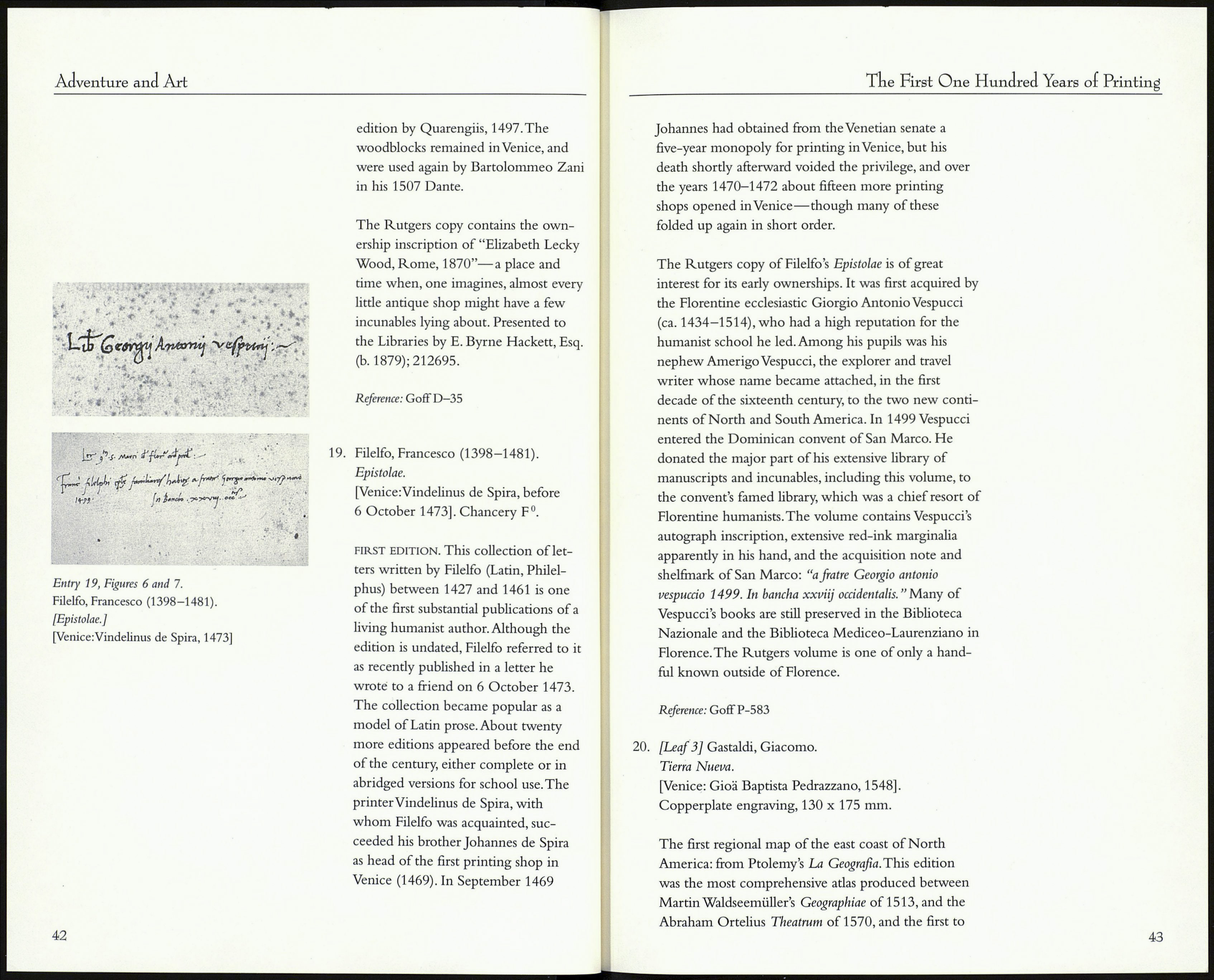 Paulus de Butzbach (in Hesse, 35 km north of Frank¬
furt am Main) is a good representative of the numer¬
ous clan of Germans who come to light in the early
printing trade of Italy. He apparently first worked as a
printer in Verona, ca. 1471-72, in partnership with a
Georgius de Augusta (Augsburg). In late 1471 he and
Georgius entered into a contract to print in Mantua
for a doctor of laws there, Peter Adam de Michaelibus.
The chief claim to fame of Paulus and Georgius is
their joint colophon in the 1472 Mantua edition of
Dante's Commedia (Goff D-23), one of three editions
of the Commedia appearing that year. From that point
Georgius de Augusta disappears from view, but
Butzbach continued printing in Mantua to 1481.

Butzbach 's edition of De Censuris is an extract from
the large Summa ofmoral theology of the Dominican
scholar-saint Antonino Pierozzi (canonized 1523), the
most important religious figure of Florence in the
generation before Savonarola and a man much loved
by the poor of the city. In the first decades of printing,
more than 140 editions of various of Antoninus's writ¬
ings were published, ranging in extent from brief
tracts and many editions of his various confessional
guides, to his giant world chronicle, and his
Summa theologica.

The Rutgers copy bound in early calf over wooden
boards, rebacked, with headbands and speckled text
edges; acquired for the Libraries through the Julia
Williamson Fund, 796408; one of five in the United
States (—mj).

Fifteen editions of Dante's Divine
Comedy were printed in the fifteenth
century. From the 30 August 1481
Florence edition onward, they all
included the commentary of the Flor¬
entine scholar Cristoforo Landino.
The 1481 Dante (GoffD-29) was
intended to be fully illustrated with
beautiful engravings based on draw¬
ings of Botticelli, but the project was
abortive: engravings were made only
for the first nineteen cantos of Inferno,
and only a small fraction of the surviv¬
ing copies contain these engravings.
A Brescia edition of 31 May 1487
(D-31) was illustrated with full-page
woodcuts, but likewise incompletely:
the series of illustrations ended with
canto 1 of Paradiso. The first fully illus¬
trated Dante was printed in Venice by
Bernardinus Benalius and Matteo
Capcasa, 3 March 1491 (D-32),with
vignette (column-width) cuts for the
cantos, and full-page cuts introducing
Inferno, Purgatorio, and Paradiso. Their
artist has been convincingly identified
by Professor Lillian Armstrong as the
"Pico Master," a still-nameless but
important figure whose work is found
both in illuminated manuscripts, and
in woodcut designs for Venetian print¬
ers.