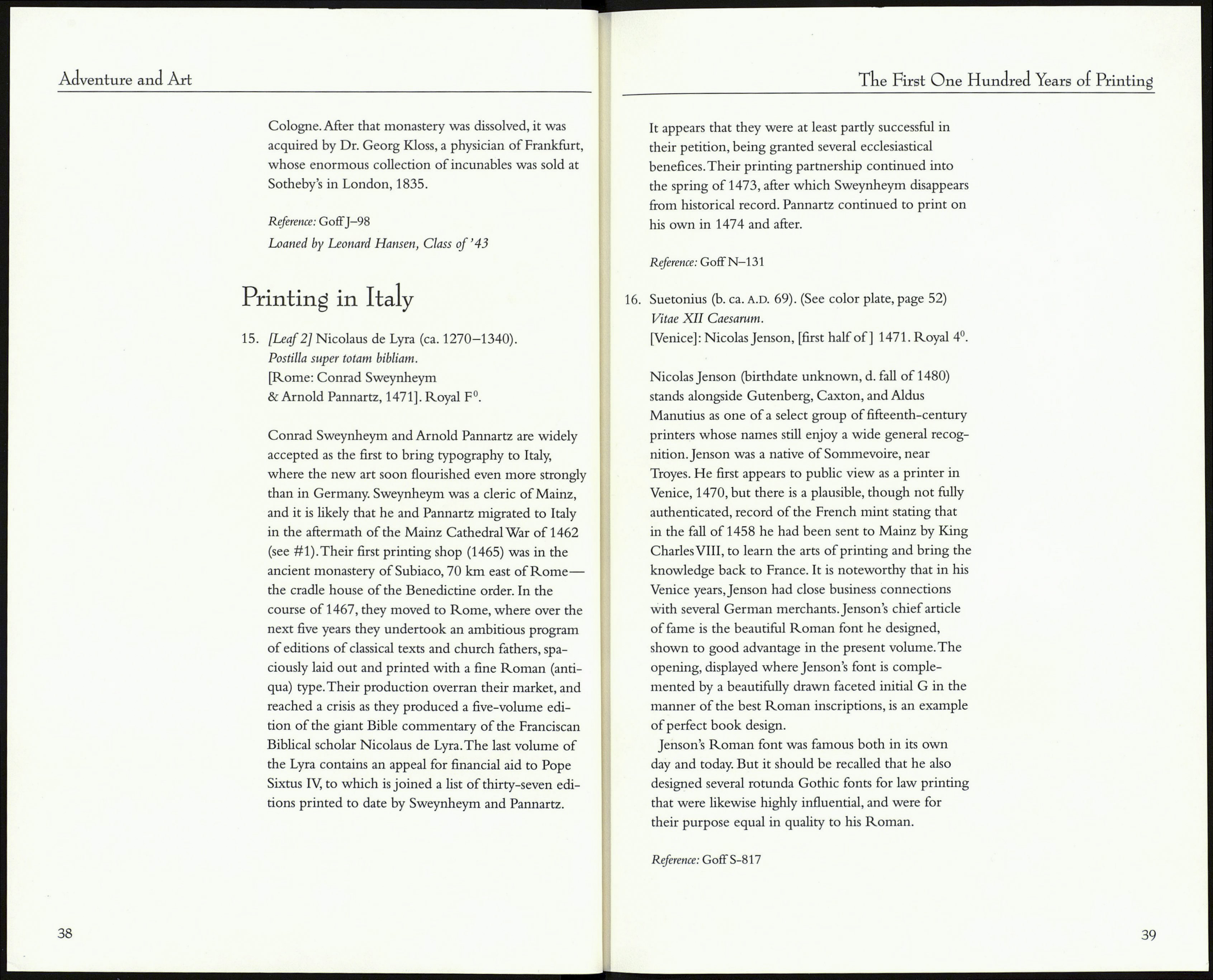 Dürer. In Herbarum vivae eicones.,Weiditz gives us the
first botanical studies of the Renaissance that are prop¬
erly scientific in their concern for descriptive accuracy
and comprehensiveness.

C.P. Snow's famous dictum, that art and science con¬
stitute separate cultures, might once have seemed less
self-evident: printed and illustrated herbáis like Brun¬
fels' actually caused the study of herbal medicine to
dominate theurapeutics for a century and a half
(Stannard, 212-220).

Printed in Frankfurt by Christian Egenolph in 1549,
the Peri hylës iatrikês of Pedanius Dioscorides of
Anazarbos, commonly called Materia medica, was the
first authoritative botanic work of antiquity, and
Dioscorides the first to categorize medical botany as
an applied science. It remained the standard work until
the eighteenth century, and of the 600 plants it
describes with their medical properties, 90 are still in
use today. The sixth book comprises the De venenis
and the De venenatis animalibus, which in the original
edition of this translation (1516) was divided into four
books numbered six to nine.The Notha and Adscripta
are not printed in this edition.

In 1486, the Imperial city of Frankfurt gained the
dubious distinction of erecting the first secular censor¬
ship office. Despite the persistence of secular censor¬
ship within its walls, however, following the arrival of
Sigmund Feyerabend in 1528, and Christian Egenolph
in 1530, Frankfurt grew to achieve an international
reputation for the production and marketing of types.
The large number of books issued by Feyerabend's
press helped to make Fraktur type, to which he was
stoutly committed, the national type of Germany (just

as Roman was becoming the national type of Italy).

Egenolph's type foundry, established in 1531, rose
to become the most influential firm in the seven¬
teenth century. Even in the eighteenth century, under
the new name of Luther, it sold its manufacture as far
as Philadelphia where the first American foundry,
established in 1772, became its customer.

Egenolph's publications are distinguished by the
beauty of their woodcut illustrations, for which Frank¬
furt also secured an international reputation during
the second half of the sixteenth century.

Conrad Winters, a native of Hamburg, had an active
printing shop in Cologne from ca. 1475 to 1482,
which primarily served the reading needs of the
numerous clergy of the archdiocese, both regular and
secular. This is the latest of four editions Winters
printed of the Legenda aurea or Golden Legend com¬
posed by Jacobus de Voragine, the Dominican Arch¬
bishop of Genoa. The work is a collection of saints'
lives arranged calendrically by feast days. It was con¬
tinuously popular from the late thirteenth to early
sixteenth centuries. More than seventy Latin editions
of the Golden Legend were printed in the fifteenth
century; and nearly eighty editions, often with wood¬
cut illustrations of the saints, were printed variously in
Catalan, Czech, Dutch, English (translated by William
Caxton), French, Low and High German, Italian, and
Spanish. An acquaintance with the Golden Legend is
indispensable for understanding the common religious
mind in Europe in the later Middle Ages.

This copy stayed in the region of Cologne for cen¬
turies. It retains its original binding from that area, and
in the eighteenth century belonged to the Benedic¬
tine monastery of St. Nicholas in Brauweiler, near