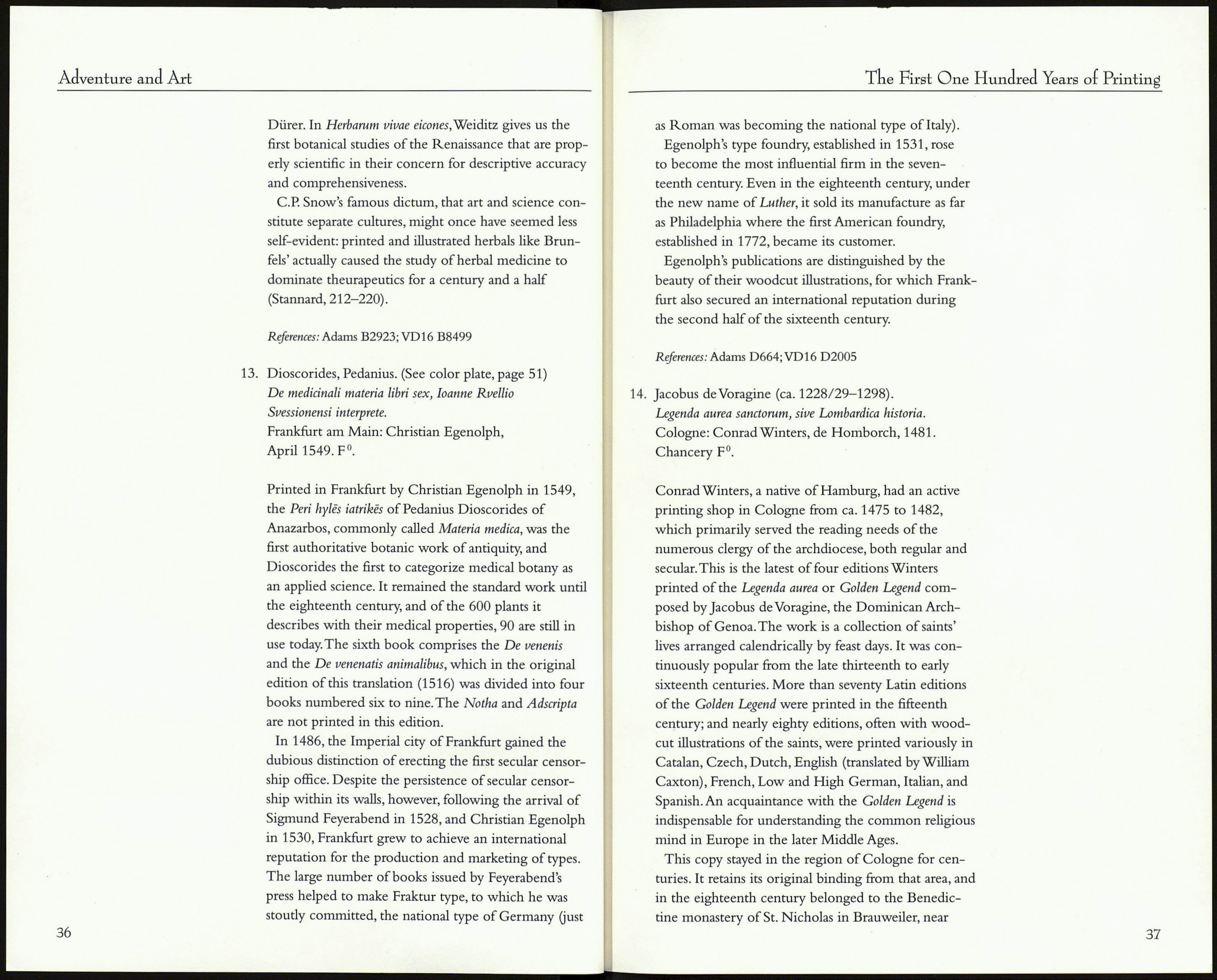 Lorenzo Valla (1406-1457) was an Italian humanist,
philosopher, and literary critic of surprising originality
and strength. Born in Rome, Valla's first published
work was a defense of a life of prudent erotic pleasure,
in which he critiqued certain touchstones of ortho¬
doxy, such as a belief in the superiority of stoic virtue
and the contemplative life (see #3). In later, more
mature, works he attacked the Poetics of Aristotle and
Cicero's speeches, finding time to engage in published
disputes with his much regarded contemporaries, such
as Poggio Bracciolini (1380-1459). One contem¬
porary drily observed, Valla wrote simply to disturb
people—a comment that, if true to his critical spirit,
unfairly minimizes Valla's substantial contribution to
the consolidation of Italian and Northern humanism
(Kristeller, 35).

Valla's Elegantiae linguae latinae (published in 1444
and first printed in 1471) was the first textbook of
Latin grammar, phraseology, and style to be written
since late antiquity, and in its preface, ѴаБа boasts of his
noble intention to "restore the Latin language to the
glory and purity that marked it before its corruption
by the barbarians" (Garin, 600). Paul Kristeller regards
Valla's grammar as a "major effort in the history of
humanist philology" (Kristeller, 25), and notes that it
remained highly popular in grammar schools all over
Europe down to the early nineteenth century (see
#48 for comparison).

The printer, Johann Schöffer of Mainz, was the son
of Peter Schöffer (ca. 1425-ca. 1502), a calligraphier,
who assisted Gutenberg in his preparation of the
printing of the forty-two-line Bible (see #1), and
under Gutenberg's supervision, designed the first type¬
face. After Gutenberg's bankruptcy, Schöffer continued
as a printer, financed by Johann Fust (1400-1466).
Among his historically significant publications is
the so-called Mainz Psalter of 1457 (Psalterium. With
canticles, hymns, capitula, preces maiores and minores.

[Mainz],Johann Fust and Peter Schoeffer, 14 August
1457), the first book to integrate multiple colored inks
in the same press run. Johann Schöffer took over the
business from his father in 1503, and remained unoffi¬
cial printer to the university until 1531. Most of his
books are of classical scholarship. Historians reference
his 1505 German translation of Livy in fortifying the
case for Gutenberg as the inventor of printing from
types, remarking in its colophon the following passage:
"In Mainz the ingenious Johann Gutenberg invented
the wonderful art of printing in the year 1450, after
which it was improved and finished by the industry,
expenses, and labor of Johannes Fust and Peter Schöf¬
fer in Mainz." The large rococo initials in his edition
of Valla may have been designed by Conrad Faber von
Creuznach (1500P-1533), or Gabriel Zehender, two
artists associated with his shop.

The inadequacies of Otto Brunfels' derivative text are
redeemed by the beauty and historic importance of its
illustration which makes the Herbarum vivae eicones one
of the two unrivaled masterpieces of the Germanic
school of exact realism, and an exemplar of subtlety,
accuracy, and elegance. Brunfels' botanical pastiche
crowned a varied career as the town physician at Bern,
a pastor and a sometime naturalist. Brunfels and
Johann Schott, the book's publisher (see also #10),
were very close colleagues, owing to common sympa¬
thies with the Reformation, and Schott was probably
the prime mover behind the production of Herbarum
vivae eicones (Rytz,18-21), with Brunfels a willing
hand. The illustrations and delicately carved woodcuts
are by Hans Weiditz (fl. 1475-1518), a remarkable
draftsman and block cutter. His style matured during
his late teens in the service of Hans Bargkmair in
Augsburg, and in part reveals the influence of Albrecht