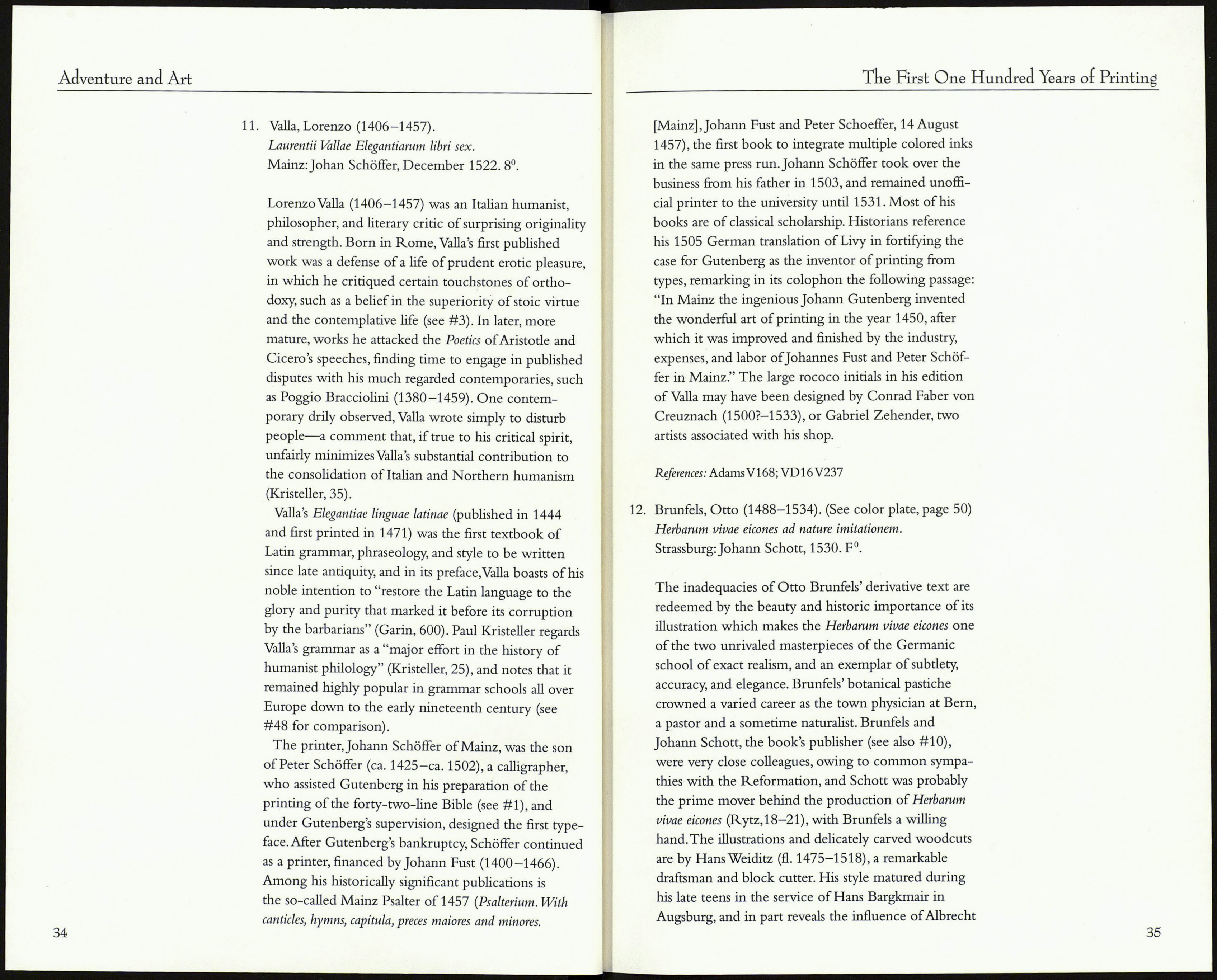 The Pantheologia is an alphabetical
summation of theology. Its author,
Rainerius of Pisa, was a Dominican;
we know from an authorial prologue
that he began his giant work in 1333.
The early printed editions add to the
Pantheologia proper an extensive table,
composed in the early 1460s by one
Jacobus Florentinus, a Franciscan, and
dedicated by him to the eminent
Dominican cardinal, Johannes deTur-
recremata (d. 1468).The Pantheologia is
a good example of the revivifying
effects of typography. It does not sur¬
vive in a large number of manuscripts
compared with many other theologi¬
cal Summae, but courtesy of the print¬
ing shops it came to enjoy a vigorous
second life, more than a century after
it was first issued. Six editions were
printed between 1473 and 1486,
five in Germany and one in Venice,
after which the text fell into abey¬
ance again.

Günther Zainer's edition was the
second, copied from the Nuremberg
editio princeps of 8 April 1473.

Loaned by Leonard Hansen, Class of'43

Johann Zainer, the first printer of Ulm
(1473), was the brother of Günther
Zainer, first printer of Augsburg (see
#8). Both learned the printing trade
in Strassburg, and both moved then to
Augsburg. It is presumed but not cer¬
tain that Johann worked in the shop of

his elder brother before setting up on his own in the
smaller city of Ulm, 65 km west of Augsburg. As with
Günther Zainer, many of Johann 's editions are distin¬
guished by fine illustration woodcuts, initials, and bor-
derpieces. His 1480 Bible in Latin, with its striking
"rococo-alphabet" initials, was one of his two most
substantial editions. The only Latin Bible printed in
Augsburg or Ulm in the fifteenth century, it is also
among the most beautiful of all early printed Bibles.
After 1480 plain-text Latin Bibles stopped being
produced in the lectern-size Royal folio format, in
favor of more compendious and, eventually, even
portable formats.

Written for young people, the Margarita philosophica
covers the whole course of university study in its time,
including the trivium and quadrivium.The generally
unexcitable Encyclopedia Britannica (15th ed.) pro¬
claims it "one of the most delightful of all encyclope¬
dias" (EB 18:272,2b).

It was printed by Johann Griininger after the earlier
edition (before 13 July 1503) of Johann Schott, with
woodcuts copied from Schott's. Johann Schott
(1477-1548) was the son of a printer, Martin Schott
(d.1499)—son-in-law of the first printer of Strassburg,
Johann Mentelin—and one of the most active of early
Strassburg printers. Among the city's artists employed
by Schott who conceivably contributed to the
Margarita philosophica were Hans Schäuffelein, Hans
Baldung (d. 1545), HansWeiditz (see #12), and
Johann Wechtlin.