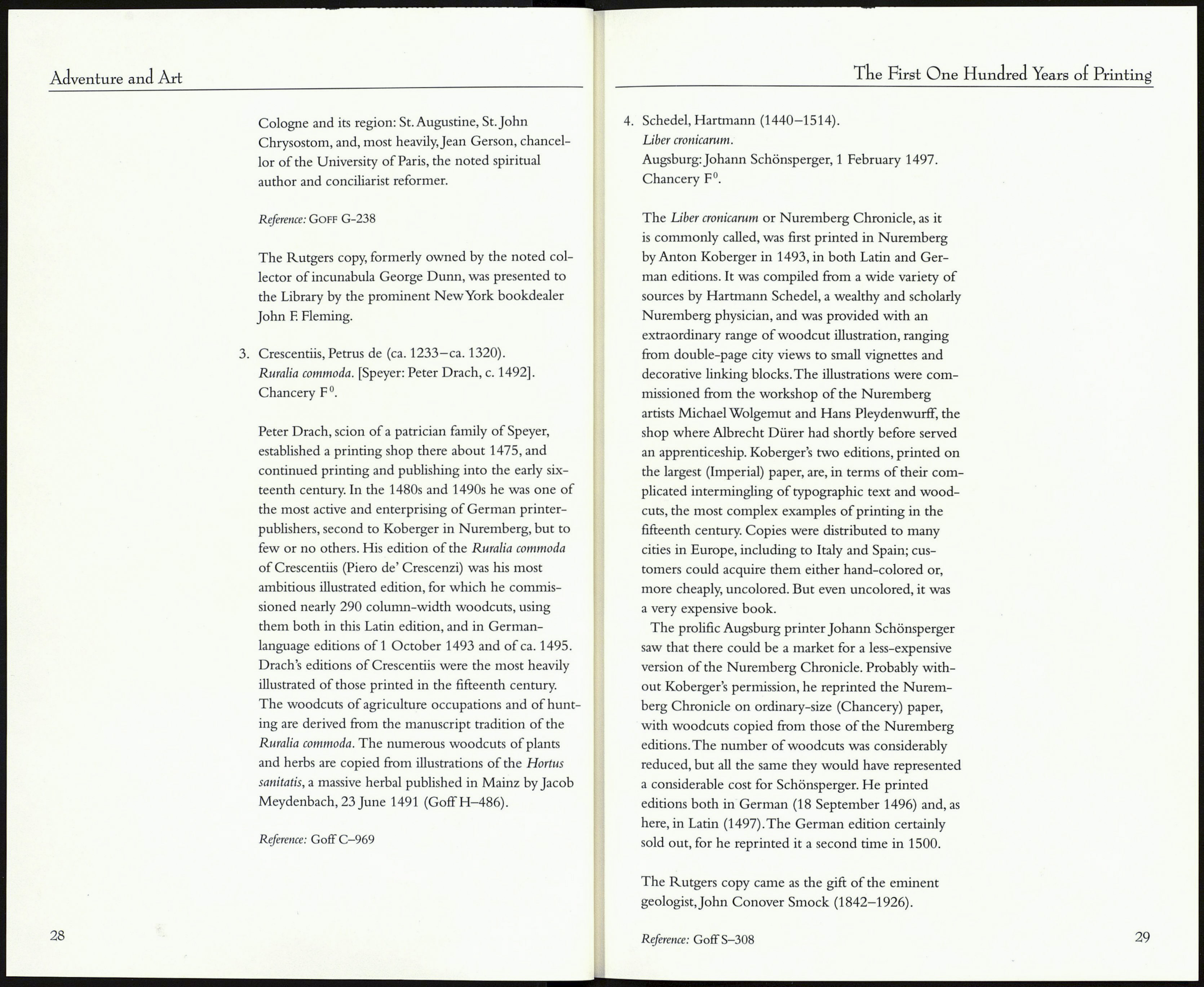 of Rendsburg, Schleswig-Holstein. Although the
Rendsburg copy preserves the first volume of its orig¬
inal binding, the contents of the volume amount to
only 131 leaves. Still other copies of the Gutenberg
Bible are represented only by scattered fragments pre¬
served as waste material in later bookbindings.These
have not been fully identified, copy by copy, but they
come from at least twenty other copies, both vellum
and paper.

The present leaf comes from an imperfect copy,
formerly in the Bavarian State Library, which was
acquired in the nineteenth century by the famous
book collector and travel writer Robert Curzon, and
was sold at Sotheby's in 1920 by his descendants. It
was bought by the New York bookdealer Gabriel
Wells, who broke it up for sale as single leaves or
groups of leaves; thus, the complete book of Genesis
from this copy is now in the University of Illinois,
the Gospel of Matthew is at Colgate University, etc.
The present leaf, with the beginning of 2 Samuel
(2 Kings by the Vulgate Bible's nomenclature) is an
unusually good example, with its large hand-drawn
initial. The Gutenberg Bible did not have printed ini¬
tial letters: these had to be supplied by hand, as did
book and prologue headings, headline titles, and chap¬
ter numbers. Each original purchaser commissioned
this work of rubrication and/or illumination sepa¬
rately, and some copies were much more elaborately
decorated than others. No two copies of the Guten¬
berg Bible are quite identical in their rubrication,
though a few artisan's shops have been identified that
worked on more than one copy. The "Noble Frag¬
ment" copy is simply but professionally rubricated.
Other copies, for example the vellum copy in the
Berlin State Library, were very luxuriously illumi¬
nated, with gilt initials and elaborate borders.

The earliest printed book in the
Rutgers University Libraries

Shortly after the completion of the
Gutenberg Bible, Johann Fust broke
his partnership with Gutenberg and
worked independently with Peter
Schoeffer. Their first great production
was the Mainz Psalter, completed
14 August 1457, and in the following
years their shop was notably active.
A variety of indirect evidences make
it very likely that the first printer of
Cologne, Ulrich Zel of Hanau, learned
the printing arts in the shop of Fust
and Schoeffer. He may have left Mainz
in the wake of the "Cathedral War"
between two contestants for the see
of Mainz. The invasion of the city in
October 1462 by the mercenaries of
the winning contestant, Prince Adolf
of Nassau, left Mainz's civic life in dis¬
ruption for several years, as many of its
leading citizens were forced into exile.
Zel matriculated at the University of
Cologne in June 1464, and his first
dated book belongs to 1466, though it
probably had undated predecessors.
His type font is essentially a copy of
the beautiful and influential font that
Fust and Schoeffer used for the Latin
Bible of 1462.

Apart from four editions of Cicero's
writings, almost all of Zeis publica¬
tions in his first years were theological
tracts aimed at the numerous clergy of